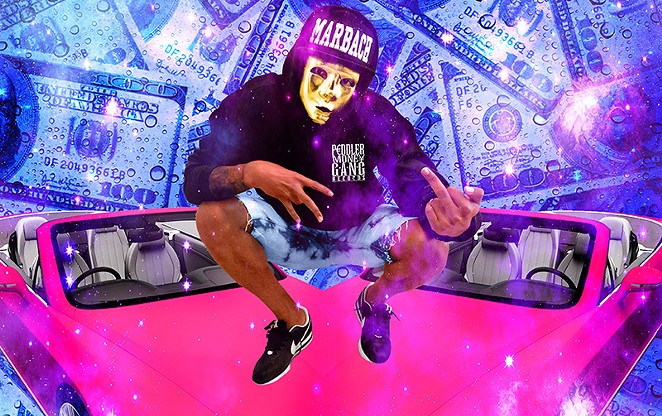 With his prolific presence on YouTube, Far Westsider P2THEGOLDMA$K is gaining attention from the right crowds in hip-hop, with support from Top Shelf Shows and features from TeamSESH. But if you ran into him somewhere in his jurisdiction on Marbach Road, you'd be none the wiser. In the tradition of MF Doom and early Ghostface Killah, P2 dons a bright gold mask, with just enough space to get a peep of vision and a thin blunt through his alloy lips.

P2 cites a few reasons for the mask, from the vanishing luxury of anonymity to making future style changes a bit easier.

"This will be an easy way to transition into new music without people attaching things to my face," P2 told the San Antonio Current. "It'll always more so be a character and characters are ever-changing."

P2's current character is consistent with the movement of Internet rap. The beats are a bit vapory, the artwork busy and absolutely captivating. The verses are shorter than what you might hear offline and the hooks are ridden hard, flexed out as far as they can possibly go. Much of the excitement comes in the ad-lib — the auxiliary track running parallel to the main hook — in which P2 plays his own hype-man, a la the BasedGod.

"Lil B and Gucci Mane are the two most influential rappers of the last decade," said P2. "Everything was spawned from that — the Atlanta shit, all the free-flowing, Internet shit, where you can make it and have your own type of style."

P2, and his hard-hitting, free-flowing Peddler Money Gang, take on this absurdism in an art form he describes as suburban hustle music.

"Marbach is widely known as being a rougher part of town, especially closer to the North Side ... Even though Marbach is what it is, it's still suburban. That's what people always leave out. Unless you're in a certain type of city, you can be in the hood, but it's still fucking suburban. You can't rap Chief Keef's lyrics, you can't rap Young Scooter's, Gucci Mane's lyrics, 'cause that's not your life. I get into the alternative, to feel more authentic about what they're listening to and reciting, you know? If someone's talking about hustling a pack or selling a little weed, you don't do that shit with big AK-47s. You drop it off to 'em at a Blockbuster or some shit."