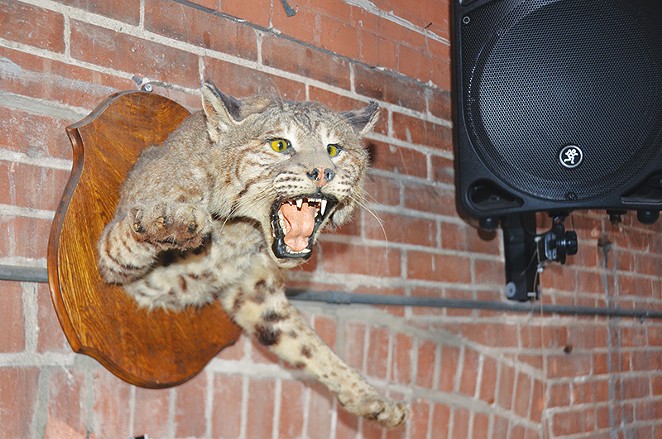 To reach Ritual Art Gallery (514 El Paso St.), drive past the Pik Nik, the bail bondsmen in the old fire station, the Magistrate and the unfortunate souls in its grasp, past the mural of Edward Snowden as a candy-caned Where's Waldo and the shuttered DIY spot Café Revolucion (RIP). Wait! If you hit the Rodriguez Funeral Home or the Rio Battery Company you've gone too far.

"We get a lot of confused visitors in here," Ritual head Ally Barrios told the San Antonio Current. "There's a battery company down the street, so people come in asking, 'Hey, you guys buying copper?' We get a lot of battery questions."

In an unlikely industrial neighborhood south of UTSA's downtown campus, Ritual Art Gallery has set up shop in an old brick building, throwing some of the best DIY shows of any underground SA spot in operation. While many art galleries pop up in close formation, hoping patrons will swing through the hive in one sweep, Ritual's location is independent, bordering on the stubborn. Then again, gallery leaders Barrios and Justin Rodriguez don't intend on running Ritual as a traditional arthouse.

"I tried submitting some work to a gallery here," said Barrios. "I never heard anything back from them, and I was tired of it. Tired of seeing the way that there are young artists here but only so many outlets for them."

That's not fair to local underground artists and musicians who need a place to show their work, which Barrios wanted to provide. That also appealed to Rodriguez.

"We wanted to revive the old-school feelings of DIY spots like 180 Grams and The Sanctuary," said Rodriguez.

My visits to Ritual have been marked by odd incidents and excellent performances. At the Wild Blood album release in July, the spaghetti-western quintet knocked out a sweaty and surprisingly clear set. Despite the no-budget approach and open bay door, Rodriguez and Barrios have rigged up a mean sound system. The speakers, along with the taxidermic animals — filled with as much brio as stuffing — are the standards that set Ritual apart from less fidelitous DIY spots.

Around midnight, a firetruck rolled past with its attention on the gallery. It looked like the fire code, the oldest enemy of the DIY, was about to come down hard. On a second pass, the audience petitioned a honk from the firefighters — if you're about to get in trouble, you might as well have some laughs in the process. But the engine obliged with a loud blast, wanting only to get in on the fun.