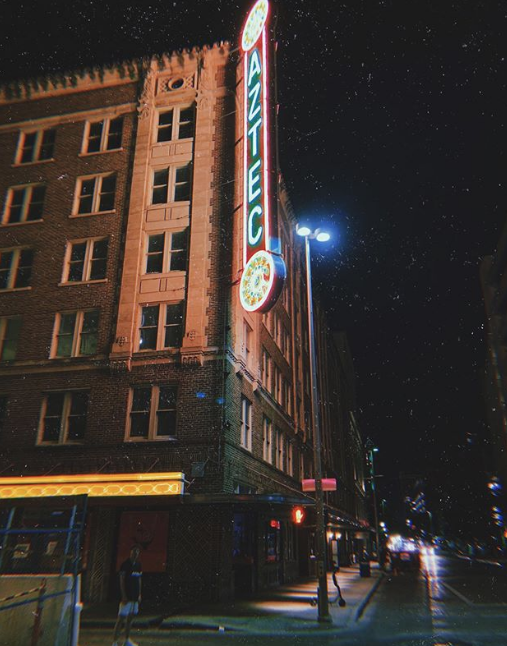 Being one of the biggest cities in the Lone Star State and all, San Antonio boasts a massive population with a massive demand for live music. Some of the avenues to concerts are obvious, both visually — hard to miss the Alamodome when you’re cruising down Interstate 37, right? — and commercially — Becky G, ZZ Top and Brad Paisley all made recent stops at the Freeman Coliseum for this year’s rodeo. Not to mention, the AT&T Center continues to up its concert game, pulling in shows from a dozen of 2019’s top-drawing concert tours.

Scratch the surface, though, and you’ll find multiple strata of venues that range from slightly sub-Rodeo to totally off the dial. If you find yourself footloose and itching for fresh sounds one of these nights, we offer our humble guide to Saytown’s less-heralded — but no-less-awesome — venues.

Aztec Theatre
Built in 1926, the Aztec Theatre began its life as a cinema. Now, it operates as a full-time music and performance venue, though you can still marvel at the pre-Columbian temple decor and massive chandelier. Nineties grungers Candlebox and Soul Collective have made recent stops, but so have established Latin arts including reina de reggaton Ivy Queen and Los Lobos. And the Aztec stays up on contemporary acts too, as evidence by its recent bookings for Memphis’ trap kingpin Young Dolph and Alabama Shake’s chanteuse Brittany Howard. 104 N. St. Mary's St., (210) 812-4355, theaztectheatre.com.

Majestic Theatre
With a 1929 dedication date, the Majestic Theatre is a shade younger than the Aztec, but with its Mission-style interior decoration and soaring ceiling, it’s no less stunning. The Majestic is a favored venue for orchestral concerts such as the San Antonio Symphony’s live performance of the score to Back to the Future and for touring musicals including Come From Away and Rent. You can also catch more dressed-down acts as well, like recent guest Ben Folds, who’d have no trouble fitting his baby grand on this stage. 224 E. Houston St., (210) 226-3333, majesticempire.com.

Tobin Center
Named after one of San Antonio’s most noted arts patrons, the Tobin is located right off the Riverwalk and prominently features what in older days might have been called High Art. Many, if not all, of the city’s classical music ensembles are frequent guests in the five-story H-E-B Performance Hall, performing repertoire ranging from Beethoven to Ravel. However, it’s also played host to pop and rock performers as diverse as Alice Cooper and Kraftwerk. In the more intimate Carlos Alvarez Studio Theater, you can sit with 299 fellow listeners for intimate performances by the likes of jazz pianist George Winston. 100 Auditorium Circle, (210) 223-8624, tobincenter.org.

Limelight
For some folks, the Limelight is the jewel in the crown of the St. Mary’s Strip. It’s a quintessential college-radio-playlist-music venue, though it boasts an above-average PA and similarly above-average cocktail menu. Limelight’s calendar covers the spread of local and touring independent acts; stop in on any given night and you’re liable to catch a touring sludge-metal band, a Saytown MC, or an eclectic indie rock ensemble. 2719 N. St Mary's St., thelimelightsa.com.

Paper Tiger
To a certain generation of scene kid, this venue will always be the White Rabbit, which occupied the building for nearly two decades. However, we’re edging up on the five-year anniversary of its relaunch as Paper Tiger, and in that time, the club has won copious loyal followers of its own. Booked heavily by talent agencies Margin Walker and Twin Productions, Paper Tiger hosts many of the larger punk, metal, rap and indie-pop acts that tour through SA in its main hall. The smaller side room hosts hardcore punk, experimental electronics and other niche genres. 2410 N. St. Mary's St., papertigersatx.com.

Sam’s Burger Joint
Sam’s Burger Joint sits a stone’s throw away from the Pearl, and as its name implies, it’s a fine place to munch a burger, sip a beer and take in a show. The calendar goes heavy on Americana and blues, including local and regional acts in addition to national powerhouses. Recent visitors have included outlaw singer-songwriter Justin Townes Earle and Houston picker Cory Morrow. 330 E. Grayson St., (210) 223-2830, samsburgerjoint.com.

Gruene Hall
Gruene Hall is the Lone Star State ur-dancehall — in other words, the oldest of its kind. Texans have been scooting boots across its wooden floor since the 19th century, downing beer by the bottle and Dr Pepper by the can. It’s no exaggeration to say that every country artist who’s worth mentioning has played here — Waylon, Willie and the boys (and girls) have all tipped their hat to the history this place holds in its walls. 1281 Gruene Road, New Braunfels, (830) 606-1281, gruenehall.com.

Hi-Tones
This little joint at the far end of the St. Mary’s Strip humbly bills itself as “a San Antonio bar,” and guey, they ain’t lyin’. Hi-Tones is home to the chamoy shot and the pickle shot, and the stage is a favored destination for hip-hop heads, rowdy punks and assorted other lovers of underground sounds. Even when there isn’t a live band, it’s easy to find a crowd bopping along to cumbia on Hi-Tones’ cozy dancefloor. 621 E. Dewey Place, (210) 785-8777, hitonessa.com.

Imagine Books & Records
True to the name, this West Side family-run shop sells both books and records. Beyond that, it’s grown into one of the most reliable DIY booking spots in town. There’s a beautiful catchall quality to the concerts at Imagine — bills can encompass teenage emocore, pedal-abusing noise acts and block-rockin’ beats. Part of the appeal is its location in the far-flung burbs, which enables Northside musicians and fans a closer-to-home alternative to the St. Mary’s Strip cluster. 8373 Culebra Road, (210) 239-7380, imaginebookstexas.com. 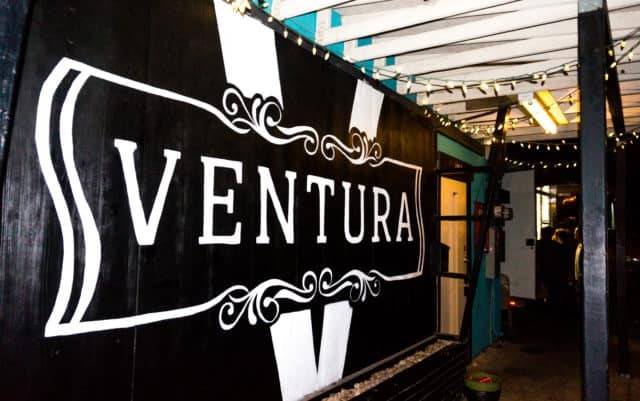 Ventura
Some in San Antonio simply know Ventura as the location of a tragic outburst of violence that left two dead and five injured during a concert. But that shouldn’t be what marks this venerable underground venue. The club, under one moniker or another, has provided a for over a decade. It is a home base to numerous San Antonio bands and artists, providing an intimate black-box venue for the heaviest metal to the most delicate indie-pop. Do yourself and our music scene a favor and pay them a visit. 1011 Avenue B, (210) 802-6940, venturasatx.com.

Luna
Luna brings an upscale listening-lounge vibe to an unexpected spot on San Pedro Avenue. Neither the music, which skews toward jazz, soul and R&B, nor the drinks disappoint. While the vibe tends to be mellow, it’s not just sit-down-and-listen music at Luna: salsa and other danceable music also features heavily on the calendar. 6740 San Pedro Ave., lunalive.com.

502 Bar
While some may scoff at the idea that quality indie-rock is available anywhere outside Loop 410. A trip to 502 Bar just may prove that theory wrong. Situated in an unassuming suite of Embassy Oaks Shopping Center, 502 has the oomph in its PA for post-rock acts such as Bright Like The Sun or soul-shakin’ indie rockers Fishermen — and, if you’re the imbibing kind, it has one of the better-appointed craft beer menus found at an indie venue. 502 Embassy Oaks, (210) 257-8125, 502bar.com.