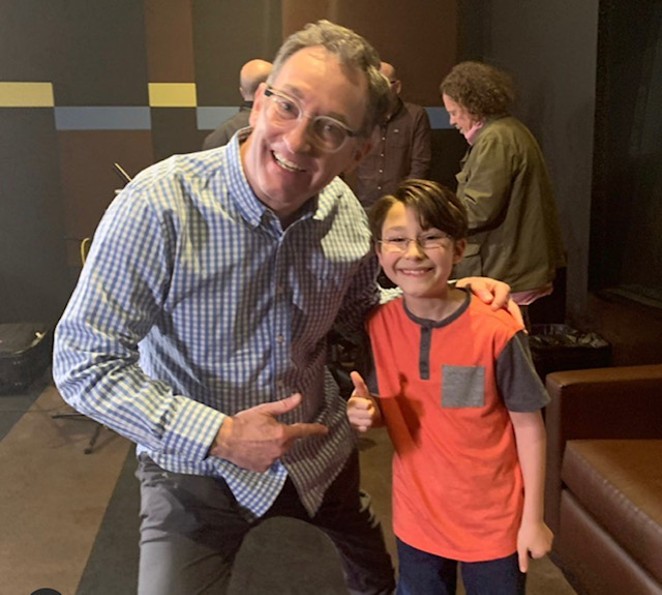 During a visit back to his home city of San Antonio about three years ago, then-8-year-old Antonio Raul Corbo sat with his mom inside her car to record a voice audition for a role in an upcoming animated movie. At the time, he wasn’t aware of the title.

The pair couldn’t find a quiet place to make the recording, so in the middle of the Texas summer with the windows rolled up to avoid any outside noise, they knocked it out and sent it off.

Corbo, who attended St. Gregory Catholic School and Lamar Elementary before he moved to Los Angeles, would soon find out that he’d auditioned and booked a role in The SpongeBob Movie: Sponge on the Run. It premieres March 4 on the new streaming platform Paramount+.

Not only did Corbo land a voice role in the anticipated animated sequel, but he was also cast to play a younger version of the beloved title character. “Young SpongeBob” appears in the new film in flashbacks alongside child versions of Patrick, Squidward and Gary, the series’ other key characters.

Corbo, who can also be seen on the comedy series Brooklyn Nine-Nine, is happy the film is finally able to find an audience. It was originally scheduled for an early-2019 theatrical release before it got shuffled around on the calendar, then pushed back again last year because of COVID-19.

The Current recently caught up with Corbo, now 11, while he took a break from virtual learning in his sixth-grade class.

Were you a fan of SpongeBob before you got the job to play Young SpongeBob?

I like the humor and how it’s animated. I always think it’s interesting how animations are [created] and how much work is put into it.

What did you think when you found out that you would be playing a young version of SpongeBob?

I was really excited! I was like, “Mom, no way! I’m playing little SpongeBob!” Everything went crazy. I told my uncle, and he was like, “Wow, that’s insane!”

Who do you think is cuter — Baby SpongeBob or Baby Yoda?

That’s honestly hard [to answer]. I think Baby Yoda on the actual show [The Mandalorian] is cute, but the Young SpongeBob Funko Pop figure is probably cuter.

Do you have one of those Funko Pop toys already?

I actually don’t. I went to my GameStop when they dropped, and they were all sold out. So, I don’t have one yet.

You should have told the GameStop worker who you were. He probably would’ve grabbed one from the back of the store for you.

(Laughs.) I would have, but it would’ve been hard to prove it!

I saw a picture of you on your Instagram page with Tom Kenny, the voice of SpongeBob.

Yeah, for the final recording he was there!

He was coaching me through everything and how to do the voice. He was a really awesome person. That was mind-blowing for him to teach me how to take the role. He said once he ages out of [playing SpongeBob], I should probably take over.

What do you like watching on TV on your spare time?

What kind of work do you hope to get as your career moves forward?

I want to do on-screen TV and movies and voice over for TV and movies. It’s always nice to balance it out a bit. Eventually, I want to work my way up to the red carpet!