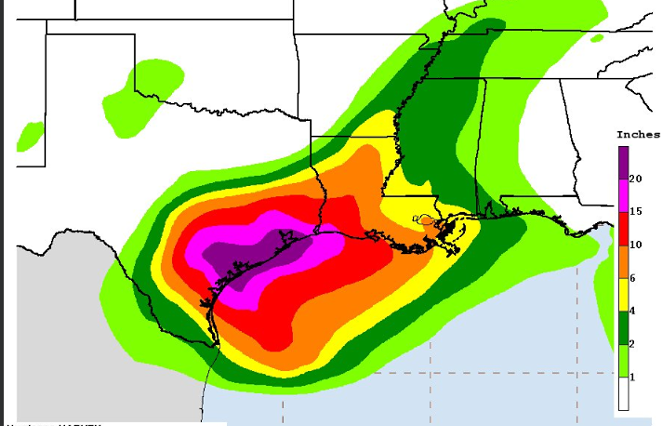 So far, the city has around 6,000 shelter beds ready for Harvey refugees, and Federal Emergency Management Agency (FEMA) has shipped about 250,000 meals, 77,000 liters of water and 4,000 tarps to the city's Randolph Air Force Base for locals and coastline evacuees.

San Antonio has been a federally and state-designated evacuation center for major hurricanes like Harvey Ever since 2005, when Hurricane Katrina sent thousands of storm refugees from Louisiana to Bexar County. According to the San Antonio Fire Department, the city has designated emergency shelters across the city that are "always ready for go." City officials seem confident in their ability to provide shelter, food, and other resources to an expected spike in visitors.

While San Antonio is only expected to be brushed by Harvey's outskirts, city officials are preparing for heavy rain over the weekend — the kind that usually sparks flash floods.

"Although we may not take a direct hit from the hurricanes ... San Antonio and Bexar County usually get inundated with a lot of rain, and the rain seems to kind of dump on us all at the same time," said Monica Ramos, spokeswoman for Bexar County, told KSAT Thursday.

As potential incentive to keep people off the street during these downpours (because it's apparently a hard sell), the city sent out a reminder Thursday that if anyone drives around a barricade when there's water on the road, they could face a $2,000 penalty and 180 jail time.


A list of road closures and high water spots around Bexar County can be found here and info on power outages here. If you're in need of shelter, the city asks you check in at 200 Gembler Road. Follow San Antonio's National Weather Service Twitter account for a Hurricane Harvey play-by-play. Any volunteers who want to help are asked to call 311.