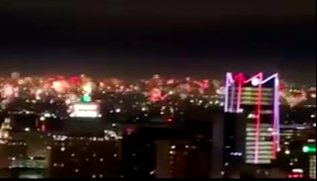 If you're among the many who can't get over how San Antonio obviously didn't care about fireworks being illegal and lit up the sky anyway on New Year's Eve, prepare for a good laugh.

As in years past, the San Antonio Fire Department set up a special hotline so concerned residents could report cases of illegal fireworks being set off within city limits. The line operated from 6 p.m. December 31 to 12:30 a.m. January 1, though most locals are aware that folks pop fireworks for days before and after New Year's arrives.


The hotline, which cost a reported $885 to run for the night, received 979 calls this past holiday.

No city does NYE fireworks like San Antonio... city wide 💥💥💥

Additionally, officers would have needed to witness someone lighting up fireworks to issue a citation. Since most people were done popping their Black Cats by the time officers arrived on scene, little could be done except remind potential offenders about the $2,000 fine for their illegal show.