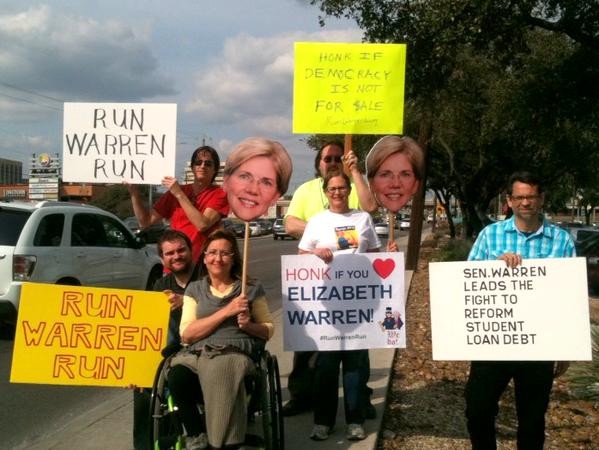 If you were near North Star Mall on Saturday and saw a group of people spending their Valentine's Day proclaiming how they are in love with the idea of Massachusetts Senator Elizabeth Warren running for president, we're here to tell you who they are.

The Valentine's Day action follows 220 "Run Warren Run" house parties across the country and was meant to raise awareness and build momentum behind this effort to convince Warren to enter the Presidential race.

There's just one problem, Warren has repeatedly said she doesn't want to run for President.

"In the nationwide membership vote, MoveOn members agreed Senator Warren would be a strong Democratic nominee, given her fiery brand of politics that focus on fixing a political and economical system that is great for powerful corporations but fails America's middle class and working families," according to the group.

Run Warren Run is comprised of members from Democracy for America and MoveOn.org.

Here's a breakdown from The New York Times on who is, and isn't, running for President in 2016.