An adventure has been brewing under our very noses at 1906 South Flores Street. In his unassuming, quiet studio blkboxspace, Jacob Hurst has huddled over a desk for many an hour working on an epic role-playing tabletop adventure co-created with Austin-based collaborators Donnie Garcia and Evan Peterson.

After five years of work and a successful Kickstarter launch for their tropical island adventure The Dark of Hot Springs Island, Hurst, Garcia and Peterson not only became game-makers, but also publishers and even award-winners (they took home the 2018 GenCon ENnie Gold for Best Adventure).

The Swordfish Islands are a mystical, tropical archipelago that can be integrated into almost any kind of role-playing game by virtue of applying statistics from an existing game system — like fifth edition Dungeons and Dragons or Dungeon Crawl Classics — to the monsters and other encounters contained within the book. Although players can currently only visit Hot Springs Island, forthcoming books will open up more enigmatic isles for adventurers to explore.

While the phrase “RPG manual” may bring to mind the image of a grungy spiral notebook full of scrawled rules, A Field Guide to Hot Springs Island and its related materials are on a whole other level. The books look like actual journals and manuals you might see on the desk in the captain’s quarters of the ship your adventuring gang will sail to the imaginary islands contained within their pages, and they are filled with evocative illustrations by San Antonio’s Gabe Hernandez. 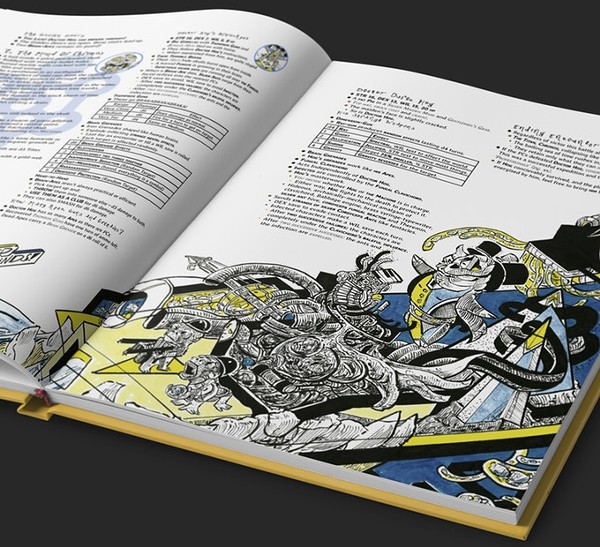 Adventurers looking to melt their brains will be attracted to Silent Titans’ setting of Wir-Heal, “a time-lost peninsula built on the tangled and comatose bodies of world-destroying trans-dimensional titans,” which is illustrated by Dirk Leichty in a style that can only be described as psychedelic M.C. Escher meets Neil Gaiman’s Mirrormask.

Unsurprisingly, the Silent Titans Kickstarter almost immediately exceeded its $6,500 goal, raising a whopping $55,109 for the book’s print run. To celebrate this wild success, Hurst will exhibit Leichty’s Silent Titans artwork at blkboxspace for Second Saturday on both March 9 and April 13.

Between the publication of their books on Hot Springs Island and the expansion into collaborative projects, you should certainly keep your eyes on the trio behind Swordfish Islands. Who knows: maybe even some of you non-nerds can find something to love in these mind-bending gamescapes.