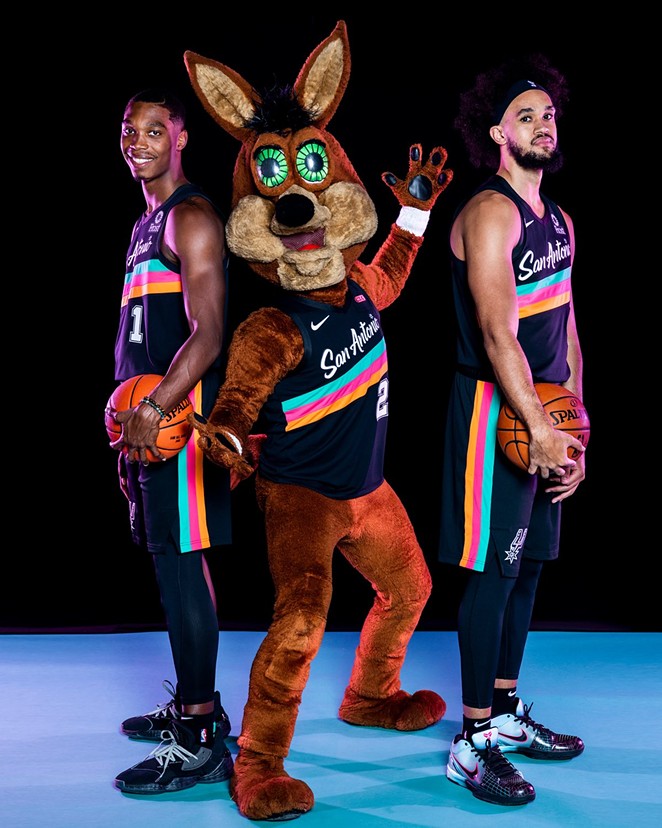 We asked, and they answered. The Spurs have finally released throwback Fiesta jerseys.

On Friday, Los Spurs unveiled new jerseys in Fiesta colors, along with a video acknowledging an extended cyberbullying campaign by fans hungry for the citywide party-themed merch.


According to MySA, the Nike City Edition alternate uniforms draw inspo from the team's game warmups from the 1989-1990 season through the 1996-1997 season.

Fans are, unsurprisingly, stoked AF about the new merch.

"Got a new Spurs Fiesta hat yesterday and I dead ass wanted to wear it the second I got out of bed," tweeted @poeticjustique.

Me and my friends after successfully cyberbullying the Spurs into giving us Fiesta jerseys: pic.twitter.com/ew2tpe9cJM


Other fans took the chance to get in a classic jab — "Love the subtle details on the new Spurs Fiesta Jerseys," @fjsosa3 tweeted along with a photoshopped image of the new jerseys with the addition of "Fuck Kawhi" above the patch on the bottom right.


Of course, not everyone is satisfied with the new gear. While the Spurs Coyote insisted the jerseys are "Still Pants Optional" in a promotional tweet, @Mos_Heff suggested that the team re-release the striped sweatpants the mascot wore on the court back in the day.

Maybe you should bring back these pants! pic.twitter.com/dXGTx6M236


Along with the new jerseys, the Spurs gave their home court a makeover, which will debut on Wednesday.

Make yourself at homecourt, Admiral.

Join the Official Facebook Fan Group to be a part of the first look: https://t.co/9nkdRPqrjx pic.twitter.com/MtPTCuh5E5


Naturally, the new paint job was also teased in a tweet by the Coyote: