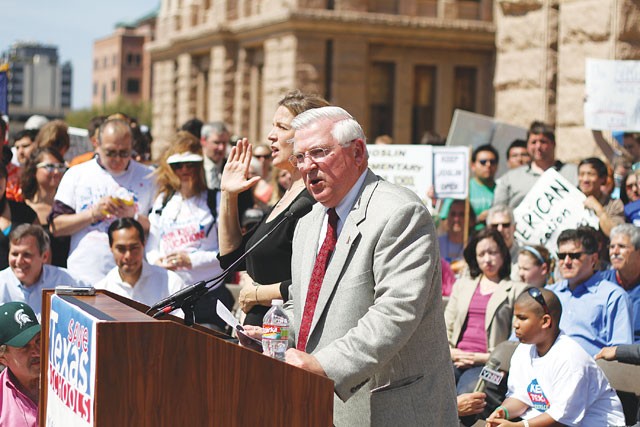 This has been a year colored by activism in the Texas public education community, as school district superintendents, teachers, and other advocates for the children of Texas rushed to Austin to demand that the Legislature continue funding school districts at current levels. It didn’t happen. On May 31, Governor Rick Perry called the Texas State Lege in for a 30-day special session to pass bills that will legalize $4 billion in education cuts.

The state’s Rainy Day Fund, with almost $6.5 billion available for emergency use, remains relatively untouched. The Republican-dominated legislature has refused to raise taxes, but instead of showing fiscal responsibility, has accepted a budgetary shortfall that will result in a 6-percent loss for school districts across the state — the worst education budget in 27 years. Dispersed over the vast territory of Texas, the cuts will hurt most in districts that receive little support from property taxes, a main funding source for the districts. Hardest hit will be rural areas and less-affluent urban neighborhoods.

The passion of spring has been replaced with despair, fear of job loss, and on the part of administrators, a slaphappy resignation to what could have been worse, a possible $9-billion loss. Though the details of the new funding allocations are still in the works, San Antonio school districts are scrambling to adjust. At the time of this dispatch, only Judson ISD and East Central have reported laying off teachers. The other 14 districts are attempting to deal with funding cuts through attrition, dropping services and positions, and through a frantic shuffling of jobs. In San Antonio ISD, kindergarten* will be cut to half-day sessions, raising the specter of hordes of five-year-old latchkey kids marauding the city. Teachers and other personnel are being encouraged to retire, with some districts handing out cash incentives to widen the departure door. During and shortly after the last week of school, the Current reached some members of local school districts, who gave us their take on the causes and meaning of the disaster.

Northside ISD Superintendent John Folks has no confusion as to the source of trouble. It’s not just the weak economy. In 2006 a new school-funding formula was implemented that lowered property taxes, replacing the decreased revenue stream with a business-margins tax. “[The Legislature] dropped property taxes, took money away from schools, and said they were going to replace it with this margins tax, and they have not held to their promise,” Folks told the Current. He also blames the misuse of stimulus money, federal funds intended to spur economic growth during the recession that were used to hide losses in state revenue. “They put the stimulus money in recurring expenditures in the 2009 session. That created more of a problem. Now that money’s gone away. It just exacerbated the problem.”

Though an April 27 report states that Northside ISD will lose 927 positions, the district plans to retain all their teachers. Asked if that were still feasible, Folks stated, “That’s our goal,” but warned of larger class sizes and fewer administrators. Most distressing, there will be fewer support staff to help struggling learners. “Our academic support in math and science will be cut, eliminated. We have had to move those support personnel into regular teaching positions. So those kids will not get the help that they have in the past.”

During the past legislative session Folks was a regular presence in Austin, strongly advocating to save funding and to address the inequities among schools. He doesn’t think Texas schools should take the bruising delivered by the Lege sitting down. “I don’t think there’s any doubt that school districts will discuss whether a lawsuit needs to be filed regarding this funding issue,” Folks said last week. “Texas has one of the most inequitable systems. Kids’ education shouldn’t be determined by the zip code in which they live. What’s fair about any district having more money per student than another district? Are the kids in one district more important than the kids in another district?”

The desire to erase inequalities in education funding has been voiced before in Texas. In 1993, the so-called Robin Hood Act was enacted to redistribute funds throughout the state. It placed a statewide cap on the amounts that could be received by school districts through local property taxes. To comply, affluent districts could enter in partnerships with poor districts to transfer their excess funds. A 2001 University of Houston report stated that the school finance program “has been largely successful in substantially equalizing 90 percent of Texas school districts’ spending per student.” That ended in 2006 when the Texas Supreme Court ruled that the act was, in effect, a state property tax, which is prohibited by the Texas State Constitution. Now, we’re back to rich and poor school districts. The districts with low property taxes will take the highest hits in the new state education budget.

Robin Hood was the result of a suit filed by Edgewood ISD in 1984 against the state aided by the Mexican American Legal Defense and Education Fund. Edgewood ISD v. Kirby, named after then-Texas Commissioner of Education William Kirby, cited discrimination against students in poor neighborhoods by the state’s distribution of education funds.

Doebbler came from the East Coast 15 years ago to teach in SA. The Westside was her first choice. “I picked Edgewood specifically in 1996 to teach in because I had read about how politically involved they were, how they fought for rights,” Doebbler said last week at a St. Mary’s strip restaurant. “But now in 2011 they are unwilling to do anything, to stand up and say, ‘You have to fund education.’ Education seems to be a non-issue in Texas. We just accept the cuts and try to deal with it.”

Bryant has only been at Kennedy for three years, and has been actively supporting his students in the classroom and at rallies in Austin. “The budget cuts are going to manifest themselves in what will come off in a very racist way, where the districts of color are going to get hit the hardest. Not to say that everyone is not being cut, but in reality the black kids and Latino kids will suffer the most,” Bryant said. “That is something, I think, that people are afraid to talk about.”

Rita Haeker, president of the Texas State Teachers Association, was born in SA. Though she was raised in Austin where she taught first grade for 16 years, all her grandparents were born and lived on SA’s west side. “It’s really shameful,” she said. “They are trying to ignore the problem, that it is just economics … it is a false choice to say, ‘We didn’t have the money to support public education in Texas.’ That’s not true. They did have the resources and the ability to do it. They chose not to do it for what I believe are political reasons more than anything.

“If they can come out of a session not raising taxes, not using our rainy day fund, it looks like they are being fiscally responsible. That’s the message that is out there, but the truth is we are being economically irresponsible to our kids, to the future of our state.”

If the special session ends without school funding restored — as is expected — there will be push back. The districts may very well sue the state. But the greatest outrage will come from parents when they discover how their child’s school day has been changed. TSTA has plans to reach out to parents, to help explain and direct the inevitable anger, and they have trained personnel ready to handle the mission. Teachers. They know how to educate.

*Correction: SAISD will retain full-day kindergarten. However, part of their Pre-Kindergarten program serving 3-4 year olds will be cut to half day sessions. Federally funded Head Start programs will remain intact.