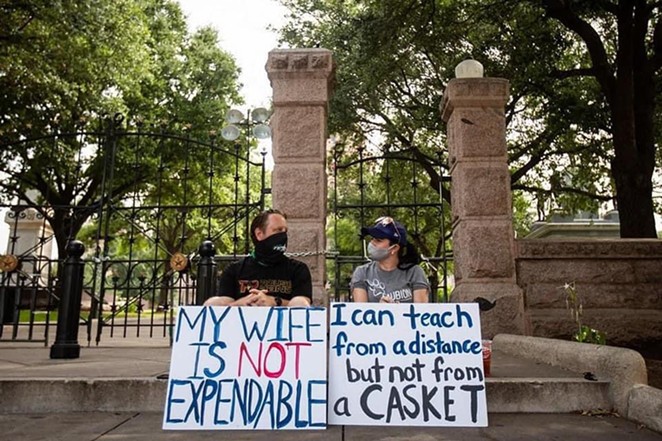 Some San Antonio public school teachers are resigning to protect themselves and their families rather than return to classrooms this fall as the COVID-19 pandemic continues to rage.

Clark High School choir teacher Megan Eyden told KSAT she's decided to resign from her job of 10 years rather than go back to teaching and risk the health of her diabetic son and an asthmatic daughter.

Teachers such as Eyden can pursue waivers to teach at home if they or someone they live with has an underlying condition. But uncertainty abounds, Eyden said.

"I just felt like time was running out for me to make a choice that would allow me to find something in the meantime, you know, before school starts again, before my last paycheck comes," she told the TV station. "Basically, to make sure that they have a way to provide for my kids.”

Eyden told the KSAT she knows of a dozen other teachers in the San Antonio area who are prepared to resign in the coming days and weeks if the state doesn't change its reopening plans.

All San Antonio school districts will be closed for in-person instruction through September 7 due to an order from the Metropolitan Health District. However, the Texas Education Agency earlier this week said that school districts risk losing state funding if they shut down campuses solely in response to closure orders issued by local health officials.


The Texas Education Agency is currently allowing school districts in the state to begin the year with remote instruction, but insisting that they transition to in-person instruction after eight weeks.

The mixed messages have been confusing for both teachers and parents, and health experts caution that it's unclear whether it will be any safer to conduct in-person classes in October than it is today.

Some teachers, like Eyden, are resigning to avoid that risk. Others are organizing to resist school re-openings.

American Federation of Teachers President Randi Weingarten said Wednesday that teachers across the country could strike if their states try to force them back into the classroom without first containing the spread of the virus.


Weingarten singled out Texas, along with Florida and Arizona, as states where "safety strikes" are most likely.


Back in June, Zeph Capo, president of Texas AFT, confirmed that a strike was on the table for Texas teachers — despite the fact that such strikes are illegal in the state and could cost teachers their pensions and licenses.

"There’s a point that you get to where you risk it all because conditions get too bad," Capo told Reform Austin. "If you’re not around to enjoy your retirement, what good does it do?"