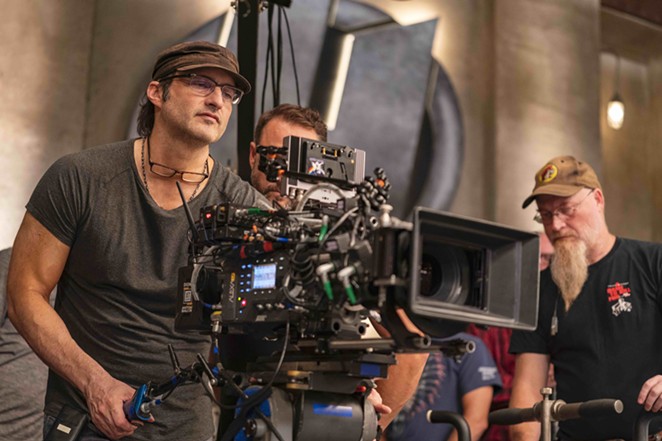 Among those are deals and projects with HBO and HBO Max, Paramount+, Netflix and more. Here’s a look at what some of San Antonio’s homegrown talent has been up to in August.

The San Antonio-born and Austin-based director of such films as Spy Kids, Desperado, Machete and Alita: Battle Angel, recently signed a deal with HBO and HBO Max to potentially develop original series for the network and streaming platform. Joining Rodriguez is his son Racer, who will serve as the lead development executive under the new agreement.

“It’s intriguing to be able to tap into the wealth of iconic IP available across the WarnerMedia portfolio and explore new stories to tell,” Rodriguez told Variety. “I’m looking forward to a meaningful collaboration with the high-caliber creative talent at HBO and HBO Max who have proven they’re willing to take risks, challenge norms and tell inclusive stories while producing a wide breadth of quality content.”

Along with his HBO deal, Rodriguez has also transitioned El Rey Network, his cable TV channel, to the streaming platform Roku Channel. The director founded El Rey in 2013 to offer programming to English-speaking Latinos. The network’s original programming included the shows From Dusk till Dawn: The Series, Matador and Lucha Underground. El Rey went off the air late last year.

A remake of the 1989 horror film Pet Sematary may have hit the big screen only a couple of years ago, but Paramount already wants to do it again. This time, they’ve cast San Antonio native Henry Thomas (E.T. The Extra-Terrestrial) in an undisclosed role. The new version, which will premiere on Paramount+, will be an adaptation of Stephen King’s 1983 bestselling book of the same name. The story follows a father who discovers an ancient burial ground near his home, which gives him the power to raise the dead.

Clickbait, a new TV miniseries debuting Wednesday, August 25 on Netflix, stars Adrian Grenier (TV’s Entourage) as a man whose abduction is broadcast online. The Alamo City connection comes through San Antonio-born actress Jessica Collins, a graduate of both Clark High School and the Julliard School. Collins began her career in 2005 on an episode of Ghost Whisperer. Since then, she’s starred as a regular on the AMC series Rubicon and NBC’s Revolution.

Walker star and San Antonio native Jared Paladecki has recently shared more details about what happened back in June when he tweeted about being left out of a new TV project. Paladecki was commenting on a tweet posted by Supernatural co-star Jensen Ackles. He and Ackles played brothers Dean and Sam Winchester on the show. Ackles’ tweet announced an upcoming series, The Winchesters, which would tell the story of Dean and Sam’s parents and feature Ackles as the narrator. The news seemed to surprise Paladecki. “Dude. Happy for you,” he tweeted. “Wish I heard about this some way other than Twitter. I’m excited to watch, but bummed that Sam Winchester had no involvement whatsoever.” Recently, the Madison High School graduate said he wasn’t blindsided by the news. “It’s hard to tweet a specific tone,” he told the New York Times. “If you write it online, it’s like, ‘Oh, he doesn’t know! They’re going to kill each other! The world is ending!’ And I’m like, ‘No, no, no.’ I try to avoid social media as much as possible because of that.”

The San Antonio-born actress is expected to return for a 10th installment of the Fast and Furious film franchise, a movie that now has an official release date. The presently unnamed sequel is scheduled for an April 7, 2023 theatrical release. That’s plenty of time to figure out how to get the entire crew up into space, so they can burn rubber on Mars.