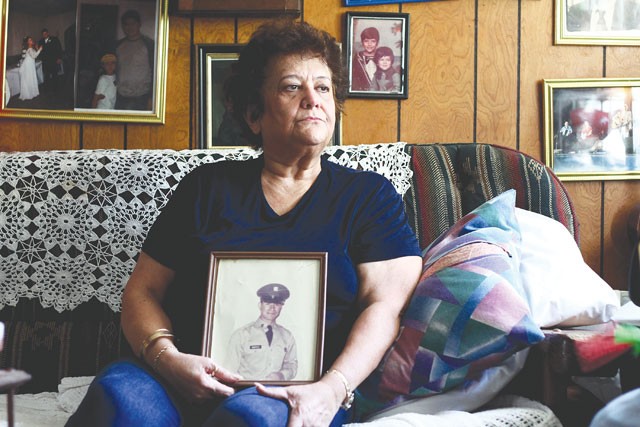 When Diana Quintanilla Montoya and her husband Thomas left San Antonio for their new post at Fort Detrick, they’d been married for just two days. Touring the military installation for the first time, they noticed signs across the base warning: “Don’t ask questions, don’t take pictures, what you see here stays here.”

The U.S. Army base on the outskirts of Frederick, Md., has a long and certifiably toxic history. In the 1950s, the post became a hub for the U.S. military’s biological testing program, and reports later surfaced that researchers had dosed human volunteers with experimental compounds. Decades later, America learned how now-infamous bio-weapons tests were secretly carried out from here inside the Washington, D.C., bus system and New York City subways.

Decades-old Army records show Montoya and her husband had been stationed at Detrick for just over a year, from early 1967 and into 1968, before they returned to South Texas, yet health problems surfaced almost immediately, Montoya says.

The couple lived in an on-site classroom converted into a small, makeshift apartment, yards away from greenhouses where workers sprayed Agent Orange and other compounds, Montoya said. Headaches, sporadic memory loss, and mysterious rashes started to plague the couple. Her husband complained of strange substances being sprayed through the vents in the relay station where he worked as a military teletype repairman. “He eventually told me he could only wear long sleeve shirts to work,” Montoya said. “He said that stuff coming out of the vents itches and burns. … He said it was like liquid fire.” Over the course of the year, Montoya experienced a staggering eight miscarriages.

Amid rising pressure from those living around the base, the military recently began releasing information on Fort Detrick’s toxic past. Last year, Army officials announced they’d found years-ol Department of Defense reports stating that workers routinely sprayed Agent Orange in and around the base, and that researchers on site at Fort Detrick even helped develop the dangerous herbicide. The most toxic and lasting ingredient in Agent Orange, dioxin, has been linked to illnesses such as cancer, diabetes, and various nerve disorders. Agent Orange ingredients were also stored in San Antonio at Kelly AFB. (See “What remains behind,” page 13.)

Montoya says her husband’s mental and physical health began to deteriorate after returning to South Texas, that he began behaving increasingly irrational, something she blames on toxic exposure at Detrick. He was shot and killed during a bar fight in 1979.

Though denied a personal injury claim in 2008 (the Department of Defense cited a two-year statute of limitations for filing such claims, meaning the couple would have had to have known they were being poisoned back in the 1960s) Montoya said she still suffers from a compromised immune system and intense headaches. A hair sample analysis she had performed in 2002 shows elevated levels of a number of toxic metals, including lead, cadmium, and antimony.