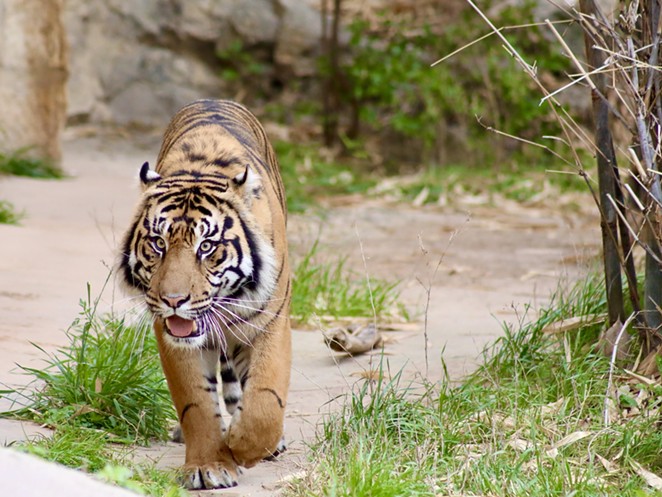 On Monday, the San Antonio Zoo introduced a new resident to the public.

Jeda, a 3-year-old male tiger, came to the Alamo City on February 9 from another Association of Zoos and Aquariums-accredited facility in Florida. He  was placed in a 30-day quarantine while staff monitored his health and habits. After the quarantine, he was introduced to the zoo's Big Cat Valley habitat.

The new tiger was brought to San Antonio as part of the AZA's Species Survival Plan. He will eventually be introduced to the zoo's female tiger, The Royal Ja’Malle, in hopes they will breed.

Jeda isn't the only new face at the San Antonio facility. In late February, a 30-year-old white rhino named Stormy arrived from North Carolina Zoo. As with Jeda, Stormy was brought to the Alamo City as part of the AZA's Species Survival Plan to breed with the zoo's two female rhinos, Reina and West.

“We are very excited about Jeda’s arrival,” zoo President and CEO Tim Morrow said in a release.

“We look forward to our guests seeing and learning more about him in the days and years to come. We are very proud of our role in the species survival plan for these beautiful animals. It is my sincere hope that in the coming weeks and months, the tigers will get to know each other and eventually contribute to the survival of this species through successful breeding.”