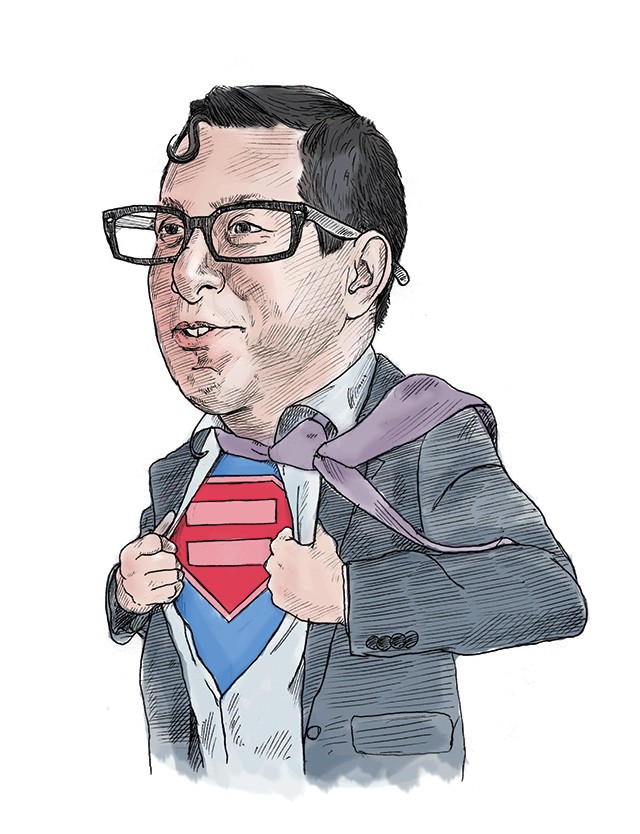 One by one, activists, family members, and allies of LGBT San Antonians stood before their councilmembers, demanding the gay community be treated as more than second-class citizens. Recounting emotional, first-person stories of victimization and intolerance, testifiers urged council to pass a measure that codifies their societal equity by granting them the same protections as their counterparts.

Take Julie Pousson, who had her life thrown into jeopardy as a result of discrimination. When rushed to Northeast Baptist Hospital in 2011 after severe heart complications, Pousson says her nurse stopped, left the room, and prayed after finding a rainbow tattoo on the patient’s skin, “For six minutes I nearly died for being who I was,” said Pousson. Recently diagnosed with kidney failure, Pousson admits she likely has a limited life span. “I don’t want to die unequal. You have the chance to make our San Antonio equal, for me, for my children, for my grandchildren.”

While pro-LGBT rights speakers, many with the Community Alliance for a United San Antonio (CAUSA), far eclipsed the handful of dissenters during a mid-June Citizens to be Heard meeting that stretched well into the evening, the passion of the religious conservative opposition – most notably right-wing Pastor Gerald Ripley’s slide presentation that included a photo of transgender ‘separate but equal restrooms’ – reveals just how steep the climb to social justice is for gay activists in San Antonio.

To them, the battle to gain parity is nothing new and neither is the overt bigotry. Now, for the first time, activists have a dedicated champion at City Hall, which has historically been less than amendable to the LGBT community. District 1 councilmember Diego Bernal is attempting to reverse the trend with a human rights ordinance that promises LGBT equality – and drawing heat from the city’s social conservative base while he’s at it.

The proposed ordinance spearheaded by Bernal shields gay, lesbian, bisexual, and transgender residents from discrimination in hiring and firing, public accommodations, fair housing, city employment, contracts, and appointments of board and commission members by adding sexual orientation and gender identity (as well as veteran status) to part of the city’s non-discrimination code. Today, no protections for LGBT residents exist in the municipal books.

That fact doesn’t rest well with CAUSA and the LGBT community, who’ve fought for years to bring San Antonio up to speed with most major metropolitan cities in the U.S. and Texas, like Austin, El Paso and Dallas, which had a similar ordinance in place since 2002. Now, thanks to Bernal, activists have a tangible draft to rally around and push for passage.

They don’t want to stop there, either. They say the “next battle” lies in forming a Human Rights Commission to investigate claims of discrimination and try to rectify them. (The commission isn’t front and center for Bernal at the moment, and may not even be necessary in his opinion; the same mechanics could be achieved through an assigned point person or a few lawyers in the city attorney’s office, he says.)

While the non-discrimination plan makes its way to the council’s agenda this August, some still feel the process is moving glacially, a product of local government’s long-standing failure to fully include and engage the LGBT community.

Not everyone at City Hall has seen eye-to-eye on the ordinance’s necessity, says Bernal. “In my mind, we [candidates and elected officials] had been thinking about it and talking about it for a long time… I was wrong in that assumption, let’s just put it that way.”

The ordinance’s progress – or lack thereof – is perhaps a microcosm of the city’s own evolution as an LGBT-friendly environment. With a progressive mayor at the helm, outspoken about marriage equality, and a councilmember serving as a receptive conduit to the gay community, San Antonio may finally be making the headway activists have long hoped for – albeit incremental and overdue.

“I feel like being safe to come out [as gay, lesbian, or transgendered] here is a very recent development,” says Bernal. “Forget the ordinance and politics, I think the atmosphere has evolved at a slow but steady rate. We’re at a point now where everyone knows someone that’s part of this community and so the issue has become personal for many people.”

Dan Graney with Stonewall Democrats of San Antonio remembers when a moment like this felt far out of reach. In 1998, the City attempted to protect municipal employees from discrimination based on sexual orientation, but swiftly retreated following condemnation from a vocal and organized opposition. “The religious right came out as a mob and slammed it as immoral,” says Graney. “The council got intimidated and pulled it from the agenda.”

CAUSA revived their call for the non-discrimination ordinance about two years ago but the City’s move to pass domestic partner benefits, strictly for city employees, temporarily drowned them out. Today, gay rights activists refuse to sit quietly by, showing up to council meetings in droves and usually outnumbering the other side – a feat once unimaginable.

“What’s happening now would not have happened 15 years ago. At the time, our community only had three or four speakers, we didn’t have anywhere close to the numbers we have now… We’ve come a long way,” Graney says.

Graney attributes the marked shift to “courageous” new local leadership (chiefly Mayor Julián Castro and Bernal) as well as the appointment of an LGBT liaison to SAPD and more recently, in city hall. Shortly after the sting of a below-average 2012 municipal equality index (MEI) ranking by the Human Rights Campaign, the mayor’s office named senior policy advisor Adam Greenup as the go-to for the LGBT community at the start of this year. Coming in behind any other major city in Texas, San Antonio scored 48 out of 100 when evaluated for LGBT inclusion in municipal law. For a city whose mayor gained national notoriety for championing gay rights, including marriage equality, the failing grade startled City Hall.

“The low score was a real eye opener for us,” said Greenup. “But the good thing about those indicators is that they provide us with the opportunity to be reflective and take stock of how the city is relating to the LGBT community.”

Greenup’s job is keeping Castro updated on what concerns that community most, anything from day-to-day logistical issues to heavy, policy-related items. The liaison anticipates the progress made – including the formation of Pride Center, a grassroots LGBT community project, and the non-discrimination ordinance proposal – will be reflected through a significantly increased MEI score next year.

“For too long the LGBT community had no outlet to turn to and there was a feeling they were being left out of policy discussions,” said Greenup.

Adding to the transformation are dramatic changes in state and national attitudes that typically end up seeping into city consciousness. According to a 2013 Equality Texas poll, 75.8 percent of voters support prohibiting employment and housing discrimination based on sexual orientation and 69.7 support the same for transgender citizens – impressive figures for a state as conservative as Texas.

Still, the ordinance is far from set in stone and while runoff election results seem to help the odds of its passage, equality activists say they’ve waited too long for the “no-brainer” policy to be enacted. So the question remains: why such a lag in the River City?

Fired on the job while transitioning genders, professional photographer Antonia Padilla has felt the sting of workplace discrimination and believes the ordinance is vital to her community. Padilla threw herself into activism as a legislative lobbyist for Equality Texas, a member of Stonewall, San Antonio Gender Association (SAGA) and CAUSA and a delegate for Hilary Clinton. The San Antonio native points to the city’s cultural heritage: “This is a Mexican town and a Catholic town; when you combine those two things you get an incredible system of shame and guilt that can be conceived.”

Reinforcing those deep roots is a small yet influential group of local social conservatives, says Lauryn Farris, president of SAGA and Transgender Education Network of Texas-Alamo Region board member.

“There is a vocal minority here that blocks progress on a lot of different issues,” says Farris, who was shunned from her evangelical church while transitioning genders.

The transgender mother of two said “I’ve seen too many people struggle, commit suicide. We really need these protections because a lot people just don’t survive – literally do not survive.”

Despite a direct line to local government and a council that’s more supportive than in years past, some activists agree that overall, the City has been slow to the table and sometimes unresponsive in meeting their needs.

“When protections are added, it begins to change attitudes of the city as well. But right now, part of this city and some of the council feel that if you’re not normal, by their standards, you shouldn’t be here. Some of the council won’t even meet with us or talk with us,” says Farris, who is inviting city figures to engage with the transgender community.

Likewise, Graney and colleagues are working diligently to arrange face-to-face meetings with city officials to educate them on the issues, “It’s a communication problem. We feel like [the city is] not reaching out to us, and they say we’re not reaching out to them. It’s a two-way street,” he says.

Activists are also critical of the ordinance’s timeline, which they see as unnecessary elongated. Bernal sympathizes, noting that when it comes to civil rights you “shouldn’t have to ask anyone to wait,” but with the same breath, stresses the reality of the bureaucratic process, in which something as asinine as summer vacation can push back important issues until August or beyond. “A lot of people have read quite a bit into why we’re going to take it up in August, but it’s really a very simple and procedural thing,” said Bernal. “Even if it takes a little bit longer, we’re eventually going to get there and that’s what matters.”

But Bernal’s real critics are the city’s religious-right, who view the ordinance as either granting “special rights” to the LGBT community (false, the ordinance gives them the same rights as everyone else) and/or a blasphemous attack on so-called “traditional” values. Bernal is well aware of the potential political costs the ordinance’s passage may result in for him.

Eyeing the thunderstorm raging outside his council office, Bernal reflects on the controversial storm erupting because of his – apparently – wild-eyed idea that all San Antonians should be protected against discrimination. Mulling the personal and professional risks involved as the chorus against him mounts, the civil rights attorney concludes, “I don’t value my political career so much that it would keep me from doing what’s right.”