The Sound of Summer Music Fest, held at Nelson Wolff Stadium on August 30-31, touted a weighty lineup of hip-hop and EDM for its inaugural installment.

But I-35 Live — the “Texas grown concert production company” behind the festival — failed to deliver on its promised lineup.

According to their social media accounts, “Taste” rapper Tyga and dubstep duo Boombox Cartel were slated to rock headlining sets on Friday, August 30, but both artists pulled out of the show that same day. 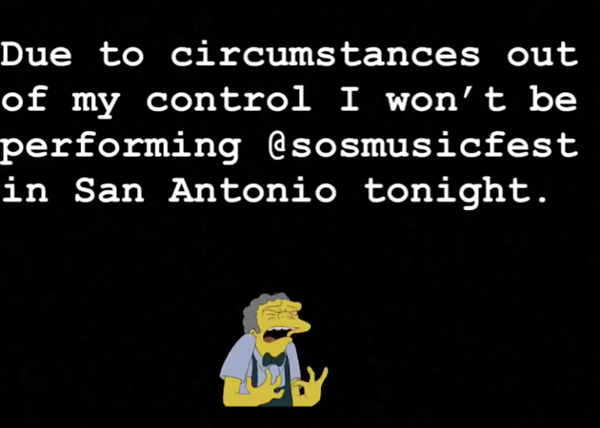 "Due to circumstances out of my control I won't be performing @sosmusicfest in San Antonio tonight," Tyga announced via Instagram.

BoomBox Cartel wrote: “San Antonio— Due to circumstances beyond my control I’ve had to cancel my set at tonight’s Sound of Summer festival. I was not confident that the production provided by the festival would allow me to deliver a performance up to my standards.”

I-35 Live officials were not available for immediate comment. It’s unclear whether the promotion company offered refunds to customers after the announcements.

However, the musicians weren't the only ones who bailed from the gig. Instagram stars Chicklet and Maleni, the event's scheduled hosts, also announced via Instagram that they had backed out.

“Yo, for those that were expecting us at the sound of summer event — we’re not there because we landed in Texas and we’ve not got nothin’," Chicklet said in his Instagram story. "Nobody’s hit us up said what time — nothing has happened since we’ve been in Texas. The last time someone spoke to us was 5 p.m. yesterday [Thursday, August 29], but that’s why we’re not there.”

The Instagram star added that he and Maleni would still try and put together a meet and greet for fans.

SOS ticket-holders complained on social media that they weren't informed of the cancellations and only learned about them via posts on the stars' accounts.

Stay tuned. We'll have more on this developing story.