San Antonio’s M.U.S.I.C. Project Aims to Help People Suffering from Dementia With Music from Their Past 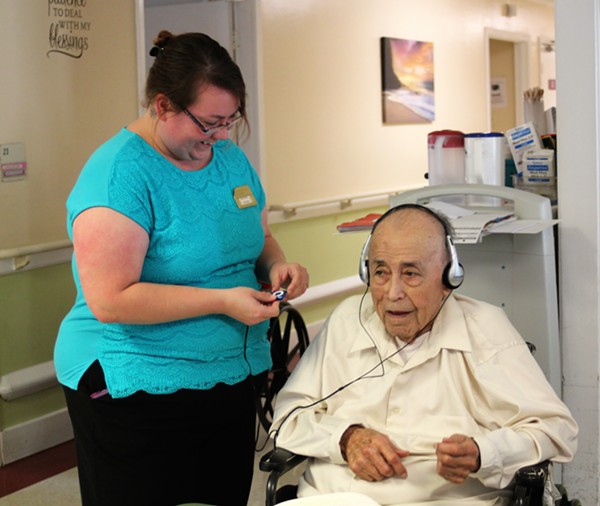 Mr. Gallegos sits with his hands in his lap, occasionally moving his fingers to the music playing through his headphones. He looks distinguished in coordinated khaki shirt and pants, his straw cowboy hat resting on the table. A nurse with the M.U.S.I.C. Project, a San Antonio nonprofit, asks if she may listen to the song playing on the iPod that has him entranced and smiling. She takes the headphones and listens for a moment, handing them back to Gallegos as a new song comes on, audible from a short distance away. “Aiiiyyeee, Mamacita!” he shouts, a broad smile spreading across his face.

The M.U.S.I.C. Project, which stands for Musicians Uniting and Supporting in Communities, is a local non- pro t started by Tim and Candyce Slusher, a licensed geriatric nurse as well as the secretary of M.U.S.I.C. Project. In the past, the group has worked with Pre-K 4 SA, placing musicians in each of their four campuses to foster an interest in music before grade school. Recently, however, the group’s attention has been refocused. They now primarily function as a liaison for the Music & Memory Program, another 501 (c)(3), like M.U.S.I.C. Project. Founded in 2008 by Dan Cohen, the program seeks to provide assisted living facilities and their residents with iPods and personalized playlists.

Employees and volunteers with M.U.S.I.C. Project visit with the residents in these facilities and discuss with their families, when available, what kind of music the residents enjoy, the goal being to substitute antipsychotics and other drugs with a more natural mood stabilizer: music. It’s Patch Adams meets Alan Lomax, a musicological attempt to improve the quality of life for San Antonians diagnosed with dementia.

However, as the state of Texas licenses 1,200 nursing and assisted-living facilities and San Antonio, itself, has 98, the task at hand can often particularly daunting, even with the Texas Department of Aging and Disabilities Services (DADS) using fines collected from nursing home citations to bankroll the Music & Memory Program for the time being. Candyce Slusher recalled working with one man, originally from Sweden, who suffered from dementia and, with no family in the area, used to just mumble to himself in his native tongue much of the day. Slusher called him one of the facility’s more challenging residents, throwing off headphones when something he doesn’t like comes on the iPod. Often he stares out the window in silence.

However, on a recent visit when Carlsson was given his iPod at Stonebrook Manor, the facility where he and Gallegos reside and the only San Antonio home currently running a full-scale Music & Memory Program, Carlsson was engaging with staff, smiling and talking. Through hours of musical guesswork, seeing what Carlsson responds well to and what makes him uncomfortable, Slusher and her team compiled a playlist specifically for him, and he appears to be loving it.

The Music & Memory Program, however, hasn’t been without critics, the most outspoken of which have been music therapists. On its website, musictherapy.org, the American Music Therapy Association claims the program may be misleading to nursing home facility administrators, who may wrongly equate the program with traditional music therapy. The association points out that people involved in the Music & Memory Program only undergo four-and-a-half hours of training, which it says is a red flag. “We are adamant that this is one more example of misleading the public by implying this is a professional certification program,” the association writes on its website. “[I]n reality, it involves 3 webinars, totaling 4.5 hours of training ... AMTA is concerned that nursing home administrators will confuse ‘personalized music’ with a clinical music therapy treatment program.”

Still, Slusher and Music & Memory proponents respond to that criticism by saying their program is just one of many treatment tools that fall under the umbrella of music therapy.

“Music & Memory just makes you feel normal, just makes you feel at home,” says Slusher. In no way does the program pretend to be traditional music therapy, she told the Current. “Music therapy is very specific. For instance, when someone is in the dying process, playing a song at 60 beats-per-minute actually could help regulate breathing. If somebody has Parkinson’s and they can’t walk today, playing a song at 90 beats-per-minute can actually help them to walk better. That is actual therapy, it’s very different.”

Sharon McCord, the Activity Assistant at Stonewood Manor, further highlights one of the hiccups that the Program has faced. For the many nursing home residents who don’t have close friends or family who visit often, staff has to employ a hit-or-miss approach when trying to figure out what music to play for each resident. Sometimes that can take hours, McCord said, time that staff doesn’t always have.

Which is why the M.U.S.I.C. Project is always seeking a range of volunteers. The non-pro t is always looking for people with some kind of experience with healthcare, dementia care, social work or psychology, or students interested in those fields to find out just what music the residents enjoy, Slusher says. But the group also needs anyone willing to sit down and teach some nursing home Carlsson and Slusher discussing the finer points of Perry Como residents how to use an iPod.

Despite criticism from the AMTA and music therapists, McCord, who utilizes the program on a daily basis, is grateful for the program’s effectiveness in soothing the residents and brightening their day. “The music is just a very therapeutic thing for them. It promotes calmer environments for them, as well. It’s quick. It’s not something that we have to take time for medication to kick in. It’s immediate ... It works wonders.”

Just last month, the M.U.S.I.C. Project held an iPod drive, raising $3,200 and 7 iPods. Although generous, the Slushers and their organization are not content to sit idly by hoping for state money. They are willing to come collect any iPods that can hold a charge from donors to see that they get to San Antonians in need. Sure, getting music back into the lives of these folks is not going to cure these debilitating diseases, but in doing so, they are helping to make the remaining years of those that suffer from dementia not only more bearable, but more enjoyable.

Mr. Carlsson rolls over in his wheelchair. Though he’s usually despondent or displeased when engaging with the nursing staff, it seems Perry Como and bossa nova have lit some sort of glow inside of him. He begins talking to a nurse, responding to her questions about how he came to the United States, telling her his name and talking to the best of his ability. It’s supposedly a rare occurrence, one that has the nursing staff and Carlsson smiling in unison.