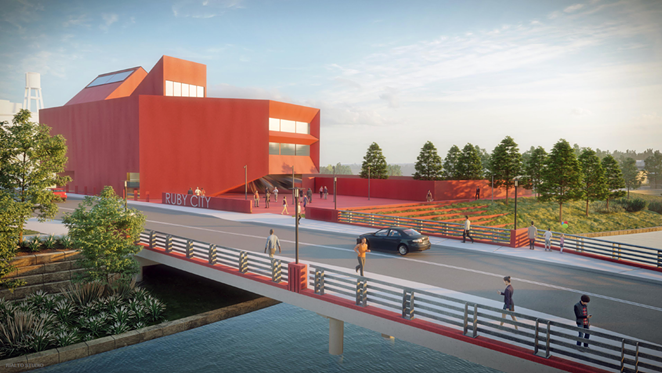 Downtown contemporary art center Ruby City will connect to San Pedro Creek Culture Park as part of an expansion that will mark the symbolic completion of its campus.

Ruby City's award-winning building will be integrated into San Pedro Creek's urban green space during the second phase of the park's restoration project. Both the building and the expansion were designed by Adjaye Associates and Alamo Architects.

As part of the project, which is scheduled for completion in early 2023, tiered terraces will descend from Ruby City to San Pedro Creek. The center also will enlarge its entry plaza.

Connecting the art center to the natural waterway marks the final step of the project for architect Sir David Adjaye, who said in a public statement that he'd always envisioned visitors entering Ruby City from a plaza along the top of the creek bank.

"With the building complete, we're now expanding the plaza down to the water with a series of red, planted terraces, echoing the mineral used in the building's architecture and what founder Linda Pace saw in her initial dream of the Center," Adjaye said.

The transformation of San Pedro Creek began in 2018 with a four-phase construction plan to convert the area into a world-class linear park. The final park will add four miles of walking trails and 11 acres of landscaping along the creek.

The project is a collaboration between the San Antonio River Authority (SARA), Bexar County and the City of San Antonio to combine public art and architectural design with purposeful habitat restoration and flood control.

SARA Public Art Curator Carrie Brown said in a statement that the connection between Ruby City and San Pedro Creek was "seamless."

"The synergy between the cultural fabric of the park and Ruby City as an iconic art institution with celebrated architectural design presents amazing partnership opportunities and we look forward to collaborating with staff to develop exciting and meaningful programming," Brown added.

Though it remains closed to the public during the pandemic, Ruby City has put up a holiday installation that can be viewed through its windows. Beloved San Antonio artist Chuck Ramirez's Christmas Trees, originally commissioned by Ruby City visionary Linda Pace, will be on view through January 4, 2021.