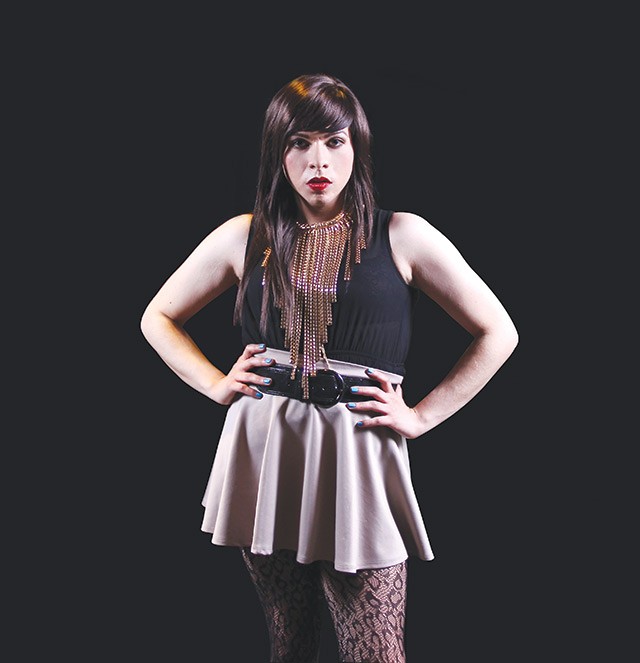 Despite the common belief that it was transgender activist Sylvia Rivera who sparked the beginning of the modern gay rights movement by flinging her high heel shoe at the cops during a 1969 police raid of the now-famed Stonewall Inn, the transgender community has clung to the letter “T” in the backseat of the “LGB” tour bus of gay history. However, as San Antonio prepares for its annual LGBT Pride celebration, there seems to be a luminous feeling of promise that legislation of late may finally result in real-time recognition and long-awaited social change for gender expression.

Sitting across from me in her mother’s “coffee and magazine room,” which is decorated like a tribute to the early 1890s, Toni Sauceda gracefully circles her wrists as she explains how, inside, she’s always felt that she was a girl.

“There’s always that conflict when people don’t understand,” she begins. Her piercing green eyes widen as she continues. “Just because I don’t have the genitalia doesn’t necessarily mean that I’m not that person. I’m a firm believer in just being who you are.”

Biologically male, Sauceda is a self-initiated 23-year-old transgender person who’s seemingly found her way sans the counsel of the established trans community. In 2009, she came to San Antonio by way of Brownsville and caught a performance of the play Miss America: A Mexicanito Fairy’s Tale which starred the late Erica Andrews. “I didn’t know she was a trans woman. I thought she was a beautiful woman. It was then I thought, ‘I can do this.’”

Since then, Sauceda’s been “full-time dressed” including “day drag,” a term which was explained to her as “when a queen goes out during the day with lighter makeup.”

She’s not offended when referred to as a drag queen, but she does make a distinction. “I’m not impersonating a woman for show,” she says. “I’m sure that there are things we all have in common with night drag queens. We all love makeup. We all love to be beautiful.”

San Antonio holds a special meaning for Sauceda, as the place where she first outed herself, even though she doesn’t fit into conventional labels in such a way strangers at once understand. “You go to the store and it’s almost like you’re speed shopping because you don’t want people to stare long enough to question your gender,” she says.

A self-described “Netflix junkie,” Sauceda keeps up with documentaries on transgender issues, so she’s aware that there are others like her who know “the ugliness of not feeling understood.”

“Deep inside? There are still things that make me a man,” she says candidly. “I like to keep it real. I like identifying as a woman but I don’t plan on getting rid of my penis. Why? Because it’s part of me. I love my penis.” However, body hair is an issue. “It’s hard,” she murmurs with tearful, downcast eyes. “Sometimes I look at myself in the mirror and sometimes I’m just a boy with a wig and a dream.”

Angela Weddle is a 31-year-old trans/queer activist who uses her legal name in everyday life but prefers to be called Alex. He feels he’s both male and female and identifies with the Native American concept of two-spirits. “I feel that trans is a modern, Western concept, and while there is no one way to be trans, I think when you say you are transgender, which I do, the first thing people think of is sex change, and not gender fluid,” he says via Facebook message. Weddle is comfortable with both feminine and masculine pronouns to describe herself.

Weddle has wrestled with depression since early childhood and, as a biracial gay person, has endured physical and verbal bullying. After two suicide attempts over the last two years, he is convinced that he’s “supposed to be here” after he recently jumped off an I-35 overpass and landed, fully conscious. Weddle is sadly not alone in attempted suicides; a broad 2011 study found that 41 percent of the transgender respondents had tried to kill themselves. In 2014, researchers from the American Foundation for Suicide Prevention and the Williams Institute at University of California—Los Angeles School of Law confirmed that transgender community members are at “exceptionally high risk” for suicide.

Unlike Sauceda, Weddle would like to one day have her female breasts removed if insurance would cover it. It so happens that in a landmark decision in May, the Department of Health and Human Services overturned a longstanding rule that prevented Medicare from covering the costs of gender reassignment surgery. “I have hated my breasts since I developed at age 10. I tried binding. But with a 40 D cup, it was very painful. I felt it wasn’t healthy to do long term.”

Weddle feels he owes a bit of gratitude to Chaz Bono’s appearance on Dancing with the Stars. “[The show] allowed me to open up the dialogue with my 70-year-old black mom,” he says. “She doesn’t fully understand, but she tries to call me Alex and she buys me men’s clothes sometimes.” Philosophically, Weddle embraces what makes him different.

“I feel the LGBT community is a community of incredibly gifted, sensitive people, which is why hate is directed towards us,” he says. “Historically, I’ve read that we, and the trans community in particular, were looked to as shamans and people of wisdom in some societies [and had] the ability to walk between two worlds.”

If a matriarchal symbol of the local transgender family exists, it could be Lauryn Farris, former president of SAGA, the San Antonio Gender Association. I’m sitting across from her at Local Coffee at the Pearl Brewery. When she leans in toward me and says, “‘gender non-conforming’ is the term I prefer,” I notice that she’s dressed in the same shade of pale blue that matches her eyes. Farris prefers feminine pronouns, unlike Weddle. She identifies as trans, and in the past, bisexual—but “never gay.”

She’s schooling me on the non-word ‘transgendered.’ “It’s not past tense,” she says warmly, although with no expression on her face. “It’s not a verb. ‘Transgender’ is an adjective. It modifies a noun. [Transgendered] is not a word.”

This month, she and her partner Kerry will celebrate 32 years of marriage. “Kerry knew that I was trans before we were married,” she says. “She thought that I’d change.”

Farris, who’s open about almost everything but her age, affirms that the word “tranny” is considered a slur and is “used and abused by some people like RuPaul” who, with unapologetic hauteur, intend it that way. “The pronoun for RuPaul is ‘he,’” Farris says with a glint of steel in her eye. “He doesn’t identify at all as female. He’s a gay man.”

She cautions that drag entertainers share similar issues. “When [drag performers] leave that club at three ‘o clock in the morning, if someone pursues them as gender non-conforming, they’re under the same risk I’m at everyday,” she says, noting that often hate crimes committed against the LGBT community have less to do with sexual expression than gender expression. “Maybe it’s safer for me ‘cause I’m out in the light of day. Every gay issue is a trans issue.”

Farris touts that President Barack Obama has done more for the trans community than any other president and has a passport to prove it. “I have employment protections under gender that have never been recognized before, because of President Obama,” she says referencing the 2012 expanded protection implemented by Title VII of the Civil Rights Act to transgender status and gender identity by the Equal Employment Opportunity Commission.

Unsurprisingly, it’s difficult to not take the anti-trans rhetoric personally. “I used to say that I was an activist ... but activists are bulletproof,” she says. “I’m not.” These days, she calls herself “merely an advocate.”

For a long time, Farris admits she blamed God. “‘Why did you have to make me like this? Different?’” she spits out in a whisper. “When I came to grips with the fact that God loved me just the way I am ... it was the first day of the rest of my life.”

My inquiry as to what makes her feel beautiful is met with genuine surprise. “I’ve never been asked that question,” she utters. “Well, a lot of trans people have a real need to ‘pass.’ We need to get rid of the concept of passing and find the beauty within.”

When asked what the trans community looks like in 2064, her vision is clear. “It ... doesn’t ... exist,” she says in measured tones. “There’s not really a need for it anymore. I think the whole concept of gender differentiation becomes much more blurred. But ... one of the biggest things that will prevent that is war. War perpetuates machismo.”

Farris believes that if she can make a difference in the life of just one young person, all of her advocacy will have been worth the pain and struggle. “I used to want to change the world,” she says. Her eyes begin to water and her voice becomes almost inaudible. “Now, I’m content with changing just one piece at a time.”

She looks out the window and says, “We are far from there.” Then, Farris turns to me and smiles. “But, yeah, we have a lot to celebrate.”