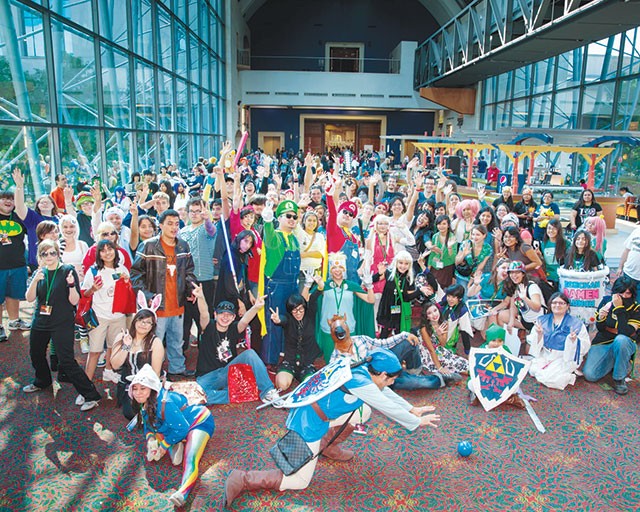 Ask San Japan community relations director David Ramirez how the local Japanese animation convention has changed over the last seven years, and the answer ultimately comes down to size.

“We’re still trying to wrap our minds around how much it has grown since year one when we had a little over 1,000 people,” said Ramirez, who expects between 13,000 to 14,000 attendees this year. “We’ve gotten so big so fast.”

“San Japan allows for people with similar interests to meet,” said local cosplayer Yasmin Khan, who manages promotions for Kaede Con, the anime convention at St. Mary’s University. “It’s a very welcoming environment for everyone. Even people who have never seen an episode of an anime are capable of having fun at this convention.”

San Japan returns to the Henry B. Gonzalez Convention Center for its third straight year after outgrowing venues like the Tropicana Hotel and the former Municipal Auditorium. Although not as sizeable as longer-running North American anime conventions like the Anime Expo in Los Angeles (61,000 attendees in 2013) or A-Kon in Dallas (22,000 attendees in 2013), San Japan is holding its own and pleased with its standing when compared to those with deeper histories.

“It is incredibly validating … particularly when the list of the largest conventions is populated by those that have been operating for more than a decade [longer] than we have,” said Ramirez.

San Japan: Samurai 7 attendees can pre-register online (adults only) or buy a one-day pass at the convention. Below, the Current highlights some of the geek-centric events taking place this year.

Whether you decide to go mainstream and wear Spider-Man tights or a sexy Xena-inspired bustier, or don such an obscure costume even your nerdiest friends won’t get the reference (Are you Skyguard Katie from World of Warcraft?), there’s room for all types of fashion at the cosplay events at San Japan. “It’s great to see 10,000 geeks and nerds running around the River Walk in costumes,” Ramirez said. In-person and online registration for the Cosplay Show starts Friday at 9 a.m. There is also a cosplay contest for attendees only interested in live-action-based costumes (sorry Princess Bubblegum).

If it’s been a lifelong dream of yours to stand in front of thousands of anime lovers and belt out your rendition of Ayumi Hamasaki’s chart-topping single “Rule/Sparkle,” San Japan gives you that opportunity during this amateur-only, karaoke-style singing competition. Along with vocal ability and how well participants memorized the lyrics (preferably in Japanese or English), judges will also be scoring singers on stage presence and appearance. So put on those oversized bows, frilly skirts and knee-high socks and rock out.

There is a little extra charge ($8) to enter the Maid Café, but this specialized restaurant popular in Japan is perfect for hungry patrons who want light refreshments served to them by attractive waitresses dressed in French maid attire. Although it may sound a bit risqué for a family-friendly convention, Maid Cafés are non-sexual, as is San Japan’s Lolita Tea Party, which has nothing to do with Vladimir Nobokov’s 1955 novel Lolita or Stanley Kubrick’s 1962 film. Instead, it describes another Japanese subculture based on Victorian-era clothing. Now that you’ve learned something, here’s the bad news: tickets for the Lolita Tea Party are sold out, so go flirt with a vending machine or something.

Entry into the masked ball formal event on July 18 at 8 p.m. comes with some serious dress code rules for anime fanboys and girls, which include a required mask (leave your Guy Fawkes masks at home, anarchists) and a laundry list of other acceptable attire (review it at san-japan.com and avoid the embarrassment of getting turned away at the door because you decided to wear Hello Kitty flip-flops). So, if you’ve always wanted to see your friend who only wears Dragon Ball Z T-shirts in a coat and tie slow dancing with a girl that shares his interest in TitanFall, drop that X-Box One control and make a night of it.

Those that live in the fantasy realm will recognize many of the voice actors, fashionistas, YouTube personalities, musicians, artists and stand-up comedians attending this year’s convention, including voice actress Lauren Landa (BlazBlue series), manga artist Amelie Belcher (Loud Snow), funnyman Karl “Uncle Yo” Custer, and Powerglove, a heavy metal band that covers theme songs—everything from Inspector Gadget to Tetris. The biggest draw of the convention, however, might be video game composer Akira Yamaoka, who created the music for the Silent Hill series.