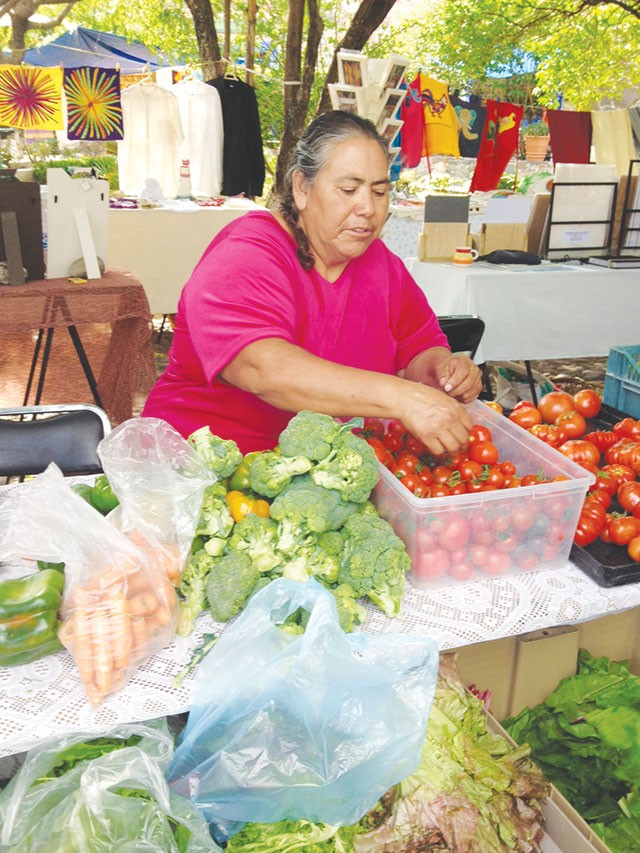 I‘ve recently returned from two weeks in The World’s Best City—so deemed by the readers of Conde Nast Traveler. Even in San Miguel de Allende, often referred to as a “charming Colonial town” in Mexico’s midsection, residents were wondering if CNT’s readers had ever been to Paris. Regardless, let the spotlight shine, and make sure it illuminates the city’s rising culinary profile. One of the things I noticed on this visit was an emphasis on organic produce.

It’s probably not quite fair to call the squatting señoras selling squash blossoms and bags of huitlacoche (corn fungus) at the tianguis trendy; they have likely been organic forever by default. But local restaurants are now beginning to make a feature of their sourcing—maybe in part due to the new, weekly organic market at which I even spotted bootleg products from our own Central Market. Via Organica, featuring all-organic foods and beers brewed in-house, is part of a larger Mexican non-profit organization that may not feed you at a farm but offers fresh, organic produce, farm tours and a farm school as a way of talking the talk and walking the walk. Our farmers markets are fine as far as they go; actually getting folks out to the farms would be a good next step.

San Miguel may be surrounded by farming communities and blessed with a benign climate, but the city is becoming increasingly aware of another advantage: a culinary heritage stretching back thousands of years. One tradition, that of ceremonial tortillas with dyed designs transferred from carved-wood paddles, survives in many Otomí villages surrounding San Miguel. As part of a regional series, Café Contento recently presented a dinner of foods from Guanajuato state, which included not only the decorated tortillas but demonstrations by the women who still make them.

Tradition is also evoked by Moxi in the flossy new Hotel Matilda. Moxi means “craving” in the Otomí language, and to cinch the notion, the hotel has secured the consulting services of chef Enrique Olvera of Mexico City’s Pujol, this year number 17 on S. Pellegrino’s list of the world’s 50 best restaurants.

(San Antonians may remember Olvera from his appearances at the New World Wine and Food Festival, precursor to Culinaria.) The menu of the stylish, modern restaurant reads like a fusion between trad- and mod-Mex with dishes such as bread made with eggs marinated in pulque, and fish wrapped in mixiotes, the transparent membrane that can be stripped out of maguey leaves. Not all dishes were mind-blowingly wonderful, but the experience, expensive by local standards, was still well worth it.

San Antonio may not have thousands of years of food history to draw on, but continuing creative appropriation from our neighbors to the south, in the manner of our own Mixtli, is a trend I could easily get behind.