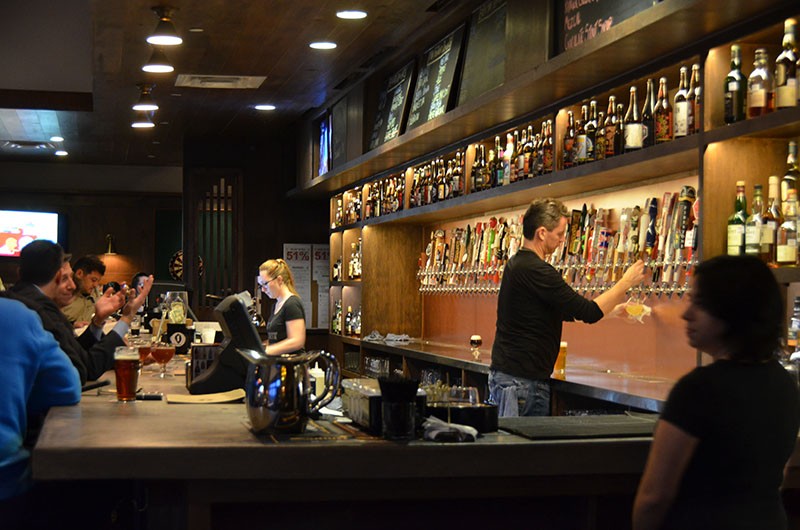 To say that the wait for Hoppy Monk was a lengthy one would be quite the understatement. The bar was first announced in June of 2013, and yet it wasn't until last month when they finally opened their doors to a, shall we say, eager crowd.

But much like their build-out phase, which took longer than expected, the El Paso-based brewpub chain's opening was on the quieter side of things. The Hoppy Monk initially invited brew lovers and enthusiast groups over for pre-opening festivities before they eventually made room for the general public. Their kitchen menu, too, was rolled out slowly, to ensure quality control as the staff adjusted to the demand, which is unsurprisingly high.

My visit to the pub on a cold and dreary Tuesday afternoon last week was interesting. Although cars were parked outside the joint, the scene was quiet and mild, and I briefly considered whether Hoppy Monk was actually open. Those fears were put aside once inside the monastery clone of a building. The dark wood paneling and columns, all hearkening to some abbey of yesteryear, added a different vibe. Was I supposed to sample all sorts of beers or say a few Hail Marys?

In any case, the space itself is quite ample. The dark wood touches are spread throughout, as tall bar tops and long tables are uniformly laid out along with shorter tables and booth-style seating. I settled along the massive bar just feet away from literally 99 types of beer on the wall. Decor at this joint steers clear of knick-knacks and brand signs and that is definitely welcome as guests will have plenty to take in when it comes to the menus.

The beers, presented in a brown three-ring binder, are broken down into styles. You'll find Belgian-style ales; blondes and ambers; brown and dark ales; ciders, lambics and fruit-based brews; hefeweizen and wheat beer; IPAs and Imperial IPAs; lagers, pilsners and kolsch; pale ales; Scottish; seasonals; stouts; and strong ales on draught. Above the tap system, which is quite a sight to take in, is a board with featured beers and a featured cocktail (other drinks are on their way soon, according to management) and flanking the taps is a wall's worth of Scotch, a program curated by one of the managers to include a selection of small-batch and craft whiskeys.

I settled for the moderately priced Founders Breakfast Stouts (a favorite of our Current beer correspondent), which came at $6, but had to wait to place my order as the venue came alive with a fresh-outta-work crowd that ranged from industry folk to office denizens from surrounding businesses. Given Hoppy Monk's location on the southwest corner of the 1604 and 281 interchange, I suppose I shouldn't be completely surprised, but the location has yet to launch a happy hour. Clearly, San Antonians are jazzed about beer and the selection is agreeable, filled with Texan and small breweries that mirror the establishment's mission of craft-focused business (for instance, Founders will no longer be carried once their stash runs dry as the brewery has sold 30 percent of its ownership to Spain's Mahou-San Miguel).

I'd be remiss if I didn't mention the food menu, crafted by El Paso-based chef Emiliano Marentes and sous chef Daniel Chu Lopez. The menu is broken down into starters, land, sea, organic greens, burgers and sandwiches, sides and "sucre" (sweets, naturally), and I'm interested in returning for more based on the few bites I had. The IPA Korean fried chicken wings ($9) offered a good crunch, the sauce was spicy and sweet in the most harmonious of ways and the house-made ranch dressing was a nice touch. The mac of the moment ($5) was a decent serving of curly noodles, chorizo and a formidable salsa roja.

I decided to prepare for the San Antonio Cocktail Conference with a warm-up cocktail, and the Bestia Fume, named for its use of Ranger Creek's Bestia Amiable, was a decent choice. Although the board claimed the drink was made with a half ounce of Sombra mezcal (and my bartender assured me of such), the spirit was not present on the palate and was instead overwhelmed by Fernet-Branca. It wasn't off-putting by any means, but it takes a heavy pour to erase the trace of the characteristically smoky mezcal.

As the evening progressed and more of the area's beer lovers filled the space, I chatted with manager Andrew Brooks about why Hoppy Monk took so long to build. Whether the hiccups along the way and the space's tendency to tentatively roll out new features were purposeful or not, time's been on Hoppy Monk's side. They're brewing a beer renaissance with a focus on experience and you can't pass on that.