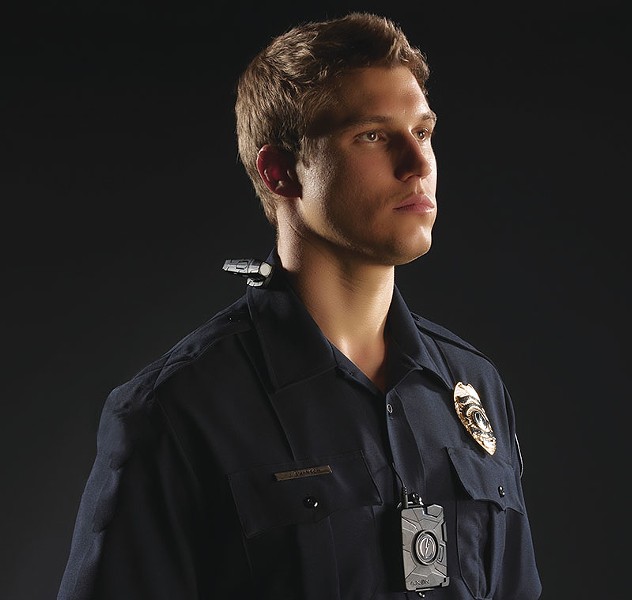 City Council will decide early next year whether to provide the San Antonio Police Department downtown bike patrol and park police with 210 body cameras. According to outgoing SAPD Chief William McManus, they are the only two units with no video recorded oversight.

After a six-month pilot program, in which the department tested 25 different types of cameras from six different companies, McManus presented the results—without any quantitative data—to City Council during its December 10 work session. The chief demonstrated the similarities and differences between dash-cam video and body camera videos, and claimed to have come up with a "model policy" that the rest of Texas can look toward, but he offered scant information about how regular patrol officers felt about the cameras.

McManus didn't present any data demonstrating a decrease in use-of-force reports or in citizen complaints. McManus told District 8 Councilman Ron Nirenberg, the only member of the council to ask for it, that police didn't specifically track this data in relation to the pilot program, but he emphasized that he believes the data will show that complaints and use-of-force reports decline while public trust in the PD increases once the program is implemented. McManus did say Department of Homeland Security, Department of Justice and Police Executive Research Forum assessments came to the same conclusions concerning public trust and confidence.

When outgoing District 2 City Councilman Keith Toney learned that SAPD officers would have to physically turn their body cameras on and off when called to a scene, he compared soldiers in combat to police on patrol.

"If you're in battle, you don't think about the Geneva Convention," Toney, a Vietnam veteran, said. He didn't get more specific with his analogy, like whether the scene he envisioned was a violent standoff, a domestic disturbance or teenagers skateboarding on private property. He said he was concerned that there would be a segment of outraged, suspicious–perhaps malicious–San Antonio residents who will accuse police who forget to turn on body cameras of covering something up. "And I think some of us understand that that could very well be a reality ... a possible stain on our police force," Toney explained.

McManus told Toney that during a "tour of duty," which is apparently San Antonio police-speak for an eight-hour shift, officers are required to immediately notify dispatch any time a dash-cam stops functioning in a patrol car, which could become the policy for body cameras, too.

Estimates for startup costs range from $445,000 to $1.65 million, and the projected five-year cost ranges from $2.2 million to $8.1 million, McManus told the council. The wide range in pricing depends in part on whether San Antonio chooses to host its own server to store video or contracts with a cloud service.

Despite the expense, the chief clearly supports the use of body cameras. "We've often heard we need cameras for officer accountability. I don't necessarily 100-percent agree with that," McManus said, adding that the cameras can provide transparency on both sides of the lens.

Just as there are police officers who abuse their oaths, there are plenty of people out there who are gratuitously abusive toward police officers and file frivolous complaints as attempted retribution. The chief, however, firmly acknowledged the public's rapidly evolving perspective.

"The landscape of policing dramatically changed since Ferguson," McManus said, referencing the small Missouri town where a white officer shot and killed an unarmed black man last summer, igniting a long-needed public discourse on issues from race to police militarization. "Public expectations changed because of Ferguson and I think we really have an obligation to pay attention to those expectations."

The success of the body camera program in San Antonio ultimately rests on the men and women of the San Antonio Police Department, who patrol the Alamo City's streets every day.

During the meeting, District 3 Councilwoman Rebecca Viagran asked McManus about feedback from officers who participated in the pilot program. SAPD officer Johnny Moreno was on hand to provide the official perspective for the department.

According to Moreno, the cameras were met with great hesitation, but once officers became familiar with using the videos that changed. "Once we removed them, they wanted the cameras back," Moreno said. "It's that person on your shoulder or that second set of eyes, the unbiased objector ... to have something with you, to back up everything you've done." Moreno said that point resonated, creating "positive sentiment across the board."

We like that response, but a statement McManus made earlier during his presentation made us wonder whether that is in fact an across-the-board opinion at the police department.

"The only large department that has implemented was Fort Worth, and I got one story from the chief about how effective they were and how well received, and then I got another story from some other folks I talked to that wasn't quite as bright as an outlook the chief gave me," McManus said.

And with McManus standing behind Moreno while the officer explained—in front of City Council—how officers who participated in the pilot program responded to body cameras, we wonder whether any of this Fort Worth effect was in the air.

Normally, we'd just try to speak with patrol officers about the body cameras, but after Current staff writer Alexa Garcia-Ditta received a call from an SAPD internal affairs officer a few weeks ago regarding a conversation with a bike-patrol officer she spoke to when writing a story critical of the department's ticketing of homeless individuals, we don't expect to find a patrol officer willing to talk on the record. (Garcia-Ditta did not provide any information to the SAPD regarding this bike patrol officer who is allegedly under investigation.)

However, the popular online forum for certified peace officers, PoliceOne.com, provides a wide range of thoughts on body cameras, from inflammatory to thoughtful, objective to hesitant. In a non-scientific poll of 1,500 PoliceOne Facebook fans published November 12, nearly "80 percent of law-enforcement officials polled either have body-worn cameras, are testing them currently or are looking into them." Of those polled, 33.7 percent cited lack of officer privacy as their biggest concern, the most cited concern among peace officers. At the bottom of the list was maintenance, cost and physical liability for the cameras. For McManus, however, this was a top concern. Nearly 68 percent of respondents told PoliceOne that they would equip their departments with the body cameras if the decision was up to them.

The variety of responses to this poll might shed light on what average SAPD patrol officers think about body cameras.

"I've never had a false complaint (no matter how far our of left field) substantiated against me. I've seen guys alleged of partaking in horrible acts keep their careers and there hasn't been video evidence for a single one of them," poster Aalendi wrote on November 13. "I am not disputing the fact that a video would expedite the clearance of a bogus claim. That much is obvious. I just ask that department leaders and officers alike weigh out the costs to this one benefit."

Another commenter wondered whether body camera video will create an expectation. "My biggest concern is that the lack of video in the future will be regarded as a lack of credibility. There are many people crying 'wolf' over perceived police corruption that is unfounded," PDTenacity wrote on November 13. "The sheer amount of complaints make it look like there is a problem, when the fact is that the overwhelming majority of the complaints are not founded."

While Aalendi makes some reasonable criticisms of body cameras from an officer's perspective, he also appears to assume that the only people calling for use of the cameras are bad citizens. "The call for video-documented police action does not come from good, law-abiding citizens who like the police. Rather, it comes from the people we contact, arrest and detox who want to find a technicality to open IA (internal affairs) complaints and sue us on [sic]. All you are doing is opening the doors to scrutiny from those not suited to understand an officer's perception and also visibility (these cameras see better in the dark than we do) at the time of the event, without 20/20 hindsight can cause lay people to believe they are witnessing misconduct," Aalendi wrote.

Thankfully, for us regular Joe and Jane Schmoes, professional police supervisors will review body camera footage when alleged violations occur, not "those not suited to understand an officer's perception."

If Council approves the cameras and the park police and downtown bike patrol are equipped with them, the SAPD will update Council on the initiative. We hope the City will require the department to track data specific to San Antonio, because, like McManus, we expect his assumptions concerning public confidence and officer and citizen safety will prove correct. And that's a good thing for everyone.