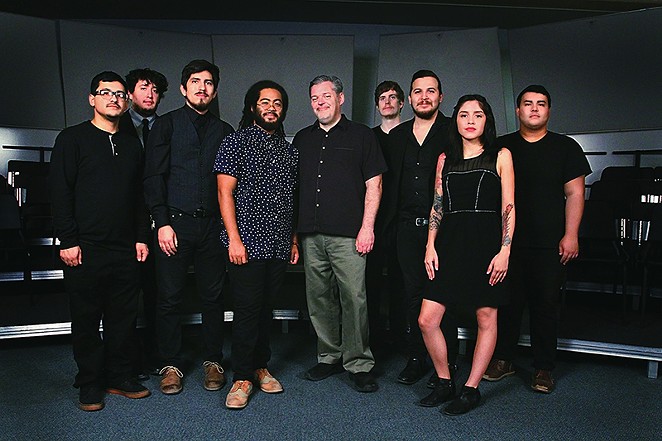 Even though he's only 26, Michael Carrillo (aka Mikey Vibe), the creative mastermind behind San Antonio's Deer Vibes, has been an important force in local music for years. Deer Vibes, best described as a kind

of orchestral indie pop/rock act, was formed in 2008 after Carrillo's former band dissolved, leaving him anxious to create his own project. The group's first output, the Ventura EP, was released in 2010 and re-released by Texas Is Funny Records in 2011.

In a recent phone interview, Carrillo told me that this re-release was really his way of restarting the band after he had found a more or less consistent core lineup. In the years since, Carrillo and crew have played tons of shows and slowly worked on the songs that comprise Deer Vibes' first full-length LP The Nature Of. While the forbiddingly ambitious size of the compositions demands a constant influx of musical talent, the stability, at least with respect to the core members, has paid off in that it has allowed Carrillo to bring this excellent album to fruition.

Now, Deer Vibes will release and present the album in full on Saturday at the Empire, with a huge assist from Youth Orchestras of San Antonio. Carrillo told me that this exciting collaboration with YOSA, which will finally allow him to present these songs in the way he dreamed them up, came about as an indirect result of YOSA's recent OK Computer Live show. Seeing YOSA's director Troy Peters' interest in working with local musicians gave Carrillo the idea that perhaps such a collaboration would be possible. And, after quite a bit of doing, his dream of presenting a full-on, orchestral show will be realized. On stage Saturday, Deer Vibes will swell to over 40 members as it's joined by YOSA players.

The Nature Of starts off with a playful percussion and keys exchange, quickly followed by ascending, gently lapping waves of strings and a wistfully triumphant brass passage. With this first song, "Still I Reach (Think I Saw You)," which slowly builds for two minutes before exploding into fullness, Deer Vibes sets the tone for the rest of the 11 track album. It's an album of contrasts — stillness and furious movement, open space and clutter, classical and indie rock, unity and isolation — that excels largely due to its sprawling, (maybe almost exhaustingly) emotive character.

"Furious Styles" and "Bet Me," tracks two and three, extend the musical hybrid space that pervades the album. Just you try to pick out all the influences reflected here or genres side-stepped. When I mentioned the music's maddening lack of easy precedent to Carrillo, he beamed. "Well, sounding like nobody else is always a good thing."

"Furious Styles" piles on more rock band fury than most other songs on the album while "Bet Me" is, quite pleasantly, all over the place, integrating brassy interludes within an ambitious, lush, widescreen landscape. The nine-minute song finds the young outfit toying with elements of classical, funk, contemporary rock and jazz. Lyrically speaking, like all of The Nature Of, Carrillo keeps it nebulous, even while lamenting addiction, anxiety and disappointment writ large. His lyrics here, filled with desire and frustration in equal measure, conclude with a bit of twisted hope. When he sings "Angel below, we could leave this town, for a better peace of mind," it's not clear if this is transcendence or retreat.

Other album highlights include the jangly and patient "One Fifty One," "Paper," the album's best song, and closer "Your(e) Light," a stripped down track that showcases Carrillo's hauntingly penetrating gift at pure singer-songwriter stuff.

Where so many young bands pile on meaningless elements in hopes of convincing the discerning listener of their creative complexity, with Deer Vibes Carrillo keeps a razor sharp focus on the natural complexities of his unique sonic vision and the way it unfurls according to the demands of each individual song. This is a remarkable and elegant debut, like a great movie that can unravel you in a million different ways, from one of the most ambitious musical talents we have.