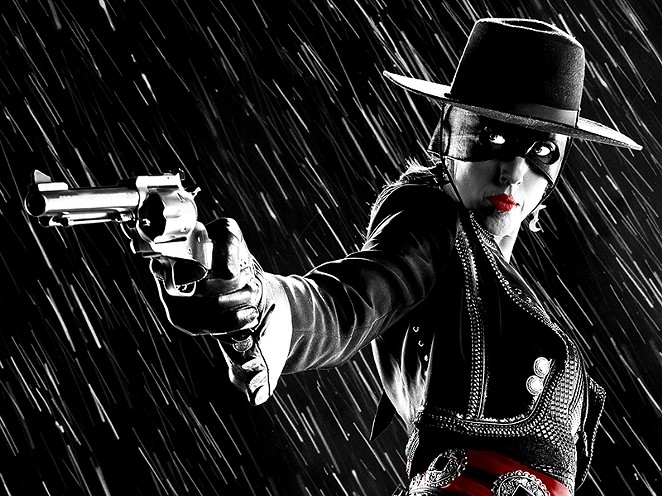 She makes appearances in Sin City and Sin City: A Dame to Kill For, but a couple of movies just weren't enough for San Antonio native, musician and actress Patricia Vonne and her character Dallas (AKA Zorro Girl), one of the members of the vigilante group known as the Girls of Old Town.

With permission from Sin City creator Frank Miller, Vonne, sister of SA filmmaker Robert Rodriguez, now stars in her own short film Zorro Girl in Dead Man's Alley. The San Antonio Current spoke to Vonne about her title role and how much she enjoys playing a symbol for female empowerment.

Zorro Girl in Dead Man's Alley will screen at the Alamo City Film Festival on Friday, Sept. 11 at 3:30pm during Short Block B, which includes nine short films. Tickets for Short Block B are $7.

You were sort of born to play this character, weren't you?

I used to dress up like Zorro Girl for Halloween as a kid! (Laughs) Frank recognized me from the screen test my brother used me to lure him into even do [the original] Sin City. Frank had written off Hollywood from [adapting] any of his work. It took my brother a lot to get him to do it. So, anyway, he saw me with my parents on the set and he was like, 'You're the girl from the test! Your Robert's sister! You'd be perfect for one of my characters!' It wasn't until I went to the fitting when I saw a picture of [Zorro Girl] on the wall. I immediately said, 'Is that going to be me? If it is, let me go home because I have that exact same outfit my wardrobe!' (Laughs) With my Guitars and Castanets album, that was my outfit – the pants and the bolero, everything but the mask. I was so honored to play her. She is such an iconic heroine.

How did this short film come about?

I just took a chance and asked Frank, 'Do you think I could do a short film with [Zorro Girl]?' With the opportunity I had been given with the character, I thought it would be a travesty if I didn't ask. I cared so much about her. I wanted to do something with her even if it was a 3-minute side story. So, I thought, 'Let's have Zorro Girl with no guns and no ammunition and incorporate some self-defense moves, so it's not just me beating up three thugs in an alleyway.' That was the approach we took. And he said yes! I was really thrilled because he doesn't approve too many things.

Do you think Zorro Girl is someone who should be admired for being a strong female character or do you think her violent nature takes away from that?

Well, I definitely didn't want to make her a nubile virgin. (Laughs) She's an Old Town girl! I wanted to take that character and give her that edge and put that in peoples' minds. I think we're onto something with these kinds of positive role models. I think girls these days need that. There is violence, but I look at it like someone would with Rocky Balboa and that kind of violence in the sport of boxing. I think this violence is more tongue in cheek like the way my brother does most of his films like Desperado where he makes the fight scenes look more like a ballet.

So, how much of the fight scene in this short film is you actually kicking butt and how much is just good editing?

(Laughs) We rehearsed for a month and I took martial arts classes. I took some classes on stunts and how to make punches look real. It encouraged me to do more kung fu and incorporate that with my dance training. My strong point is how well I can kick. It was so fun to incorporate what I was good at. I was so proud to not have a stunt double!