Mary Gonzalez and I are sitting at the table in her hot, cramped kitchen, thumbing through the pages of a weathered notebook.

On each page, Gonzalez has scrawled in boxy handwriting the names and contact information of various nonprofits and public officials. She talks me through each item, the mechanical whir of portable fans providing a steady soundtrack to our conversation.

Her small house on the West Side, not far from San Fernando Cemetery and just minutes away from the sleek new Peanut Factory Lofts, is coming apart. Gonzalez has reached out to every person or agency in the notebook to help get it repaired, to no avail.

She's 68, lives alone and makes just over minimum wage as a home health care worker. Her earnings cover her living expenses, but little else. After years of asking for help with the house, she feels forgotten.

"There's so many programs that say no, and it hurts me. I call back and I call back. And nothing," Gonzalez told the San Antonio Current. "I try to fix this and that, but it's too much for me to fix. With the income I have coming in, what do I do? It's very hard to live like that."

Gonzalez's problem is common in San Antonio, particularly among elderly and disabled people. Most of the city's poorest citizens slip through the loose web of nonprofit and civic resources for home repair. Unable to get the help they need, many watch their homes — often their most valuable asset — slip into dilapidated squalor.

"The problem begins with not being able to keep up the needed repairs until the conditions for many become substandard," said Dee Dee Sedgwick, who runs Blueprint Ministries, a local nonprofit that performs free home repair. "It is even more difficult for homeowners to get the needed repairs when the homes reach this point."

Susan Sheeran, president of Merced Housing Texas, another local nonprofit focusing on affordable housing, called the gap between their needs and the available resources "a giant chasm."

"There are not many resources for people," Sheeran noted. "Even if they did know how to navigate the system ... they wouldn't find much help." 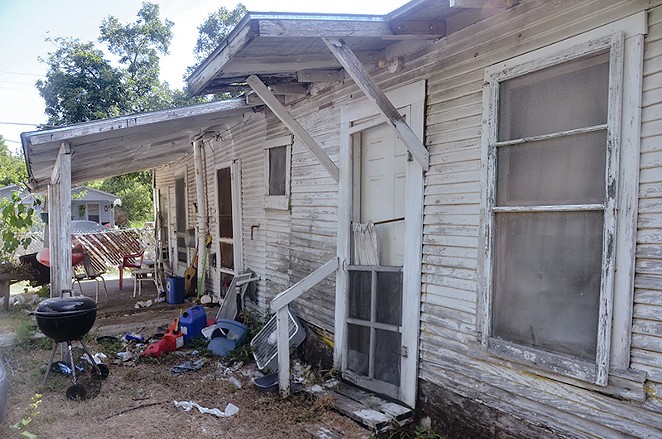 Gonzalez has lived in her house since 1970. Cracks streak through the walls in every room, the product of an uneven foundation.

The roof leaks so much in one room that she's taped black trash bags to the ceiling to stem the flow of water. But a trickle still gets through, dropping into a tall trash can positioned underneath.

"It pours in here," Gonzalez says as she shuffles gingerly from room to room, nursing a bad back.

In the kitchen, scraps of faded linoleum cover the floor in rough patches. Holes in the walls allow rats and cockroaches to filter in and out at their leisure.

Gonzalez has asked both Merced Housing Texas and Blueprint Ministries for help. Merced generally helps repair between 30 and 40 homes per year, with a waiting list of about 500 people.

Although Merced fields dozens of requests for assistance every day, it has closed its waiting list. And the longer people live in substandard conditions, the greater the psychological toll.

Across town from Gonzalez, Margaret Crain and her son Robert Crain live in a low-slung house near South Walters on the East Side, within walking distance from the Alamodome.

Margaret was born in 1921 and moved into the house shortly after. She's lived most of her life there, except for a brief stint in a home where HemisFair Park now sits, before her husband left for World War II.

Robert, 63, lives in the house to take care of his mother. He'd like to go back to work, but he's concerned about leaving his mother alone for long stretches because of her health. Together, they live off about $1,500 per month from Social Security and disability benefits.

"She's losing interest in eating. I think she's worrying too much about the house," Robert said of his mother.

The home has a claustrophobic feel to it, like it's actively eroding and shrinking around you. The ceiling sags and the floor is slanted toward the door. Sunlight peeks through gaps between the walls and ceiling. Outside, stray cats tip-toe through plastic water bottles and microwave dinner trays lay scattered on the ground.

Margaret spends most of her life in her five-by-seven bedroom. She leaves the house about twice a week, usually to deposit her Social Security check and see her doctor.

Hers is the only room in the house with air conditioning — a luxury that Robert springs for, since he worries about the summer heat taking a toll on his mother. The old grimy unit occasionally sputters and spits droplets of water, but it makes a real difference. The rest of the house feels like a sauna, baking in the early August heat.

Winter is the real trial, though. The home no longer has a furnace, removed several years ago because of a gas leak and then never replaced. Margaret can feel the chilled air blowing through the walls. 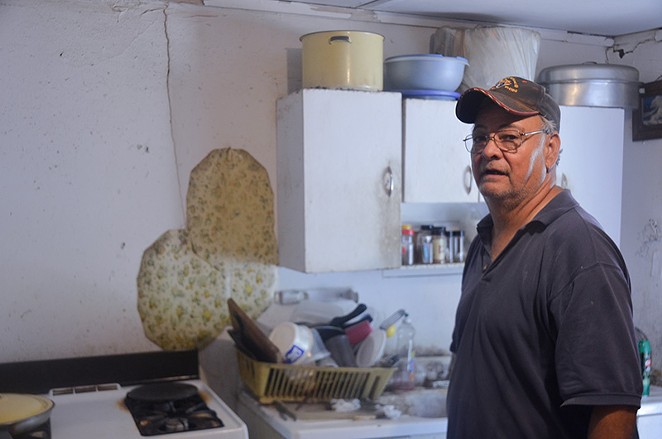 The city relies on grants from the federal Department of Housing and Urban Development — led by former SA mayor Julián Castro – for home repairs for the poor, much of which it funnels to nonprofits such as Merced. Its main program is the Owner-Occupied Rehabilitation Program, which provides no-interest, deferrable loans to low-income households.

The program provides a maximum of $50,000 grants, though most participants receive closer to $25,000. But it's also only available in specific targeted neighborhoods and houses must meet certain structural integrity standards.

"If the property is deemed structurally and economically infeasible to rehabilitate, the application case file is denied," said Thea Setterbo, a spokeswoman for the city.

City Council recently approved a five-year plan for $89 million in federal housing grants, the bulk of which will fund "decent safe affordable housing" and neighborhood revitalization. But there's also an unprecedented push building to leverage local funds to solve the problem.

San Antonio will offer its first-ever housing bond in 2017, which will dedicate at least $50 million to affordable housing, housing repair and neighborhood improvement.

"Cities fund what are important projects for the city," said Alan Warrick, a councilman whose district takes in the East Side. "With this housing bond, we're going to show that taking care of the least of us and the people with the least amount of resources is what's important to the City of San Antonio, and not just these big ticket items like the Alamodome and the Convention Center."

The bond is part of Bexar County Commissioner Tommy Calvert's proposed Neighborhood Revitalization Fund. Calvert hopes that the city will increase its commitment to $100 million, with the county offering another $100 million.

The idea is to boost home values and break up San Antonio's profound geographical income inequality.

"We want incomes to be mixed because it's good for public policy," Calvert said. "The number one way to provide the American Dream ... is to build wealth through home ownership, the number one thing that people have as an asset. That's why I believe that this bond will be ... one of the most transformative things we've ever done."

Outside the house, she dishes on her neighbors as we stand on her front porch, telling me who just got a new truck and who's still in the hospital with diabetes complications.

Regardless of her home's condition, this is still her neighborhood and she feels safe here. She doesn't think she'll ever move.

I turn to leave, ready to drive back to my snug apartment and Gonzalez gives me a hug.

"Don't forget about me, Michael," she said.