SA's Second In The Country For Elderly Food Insecurity 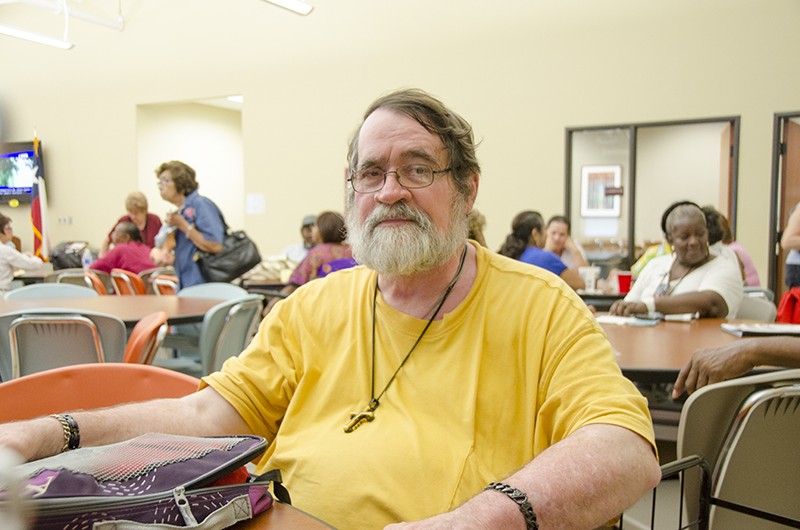 Pay for rent, pay for prescriptions or pay for food.

No senior citizen should have to make such a choice, but many do — at a higher rate in San Antonio than almost anywhere else in the country.

"It's heartbreaking when you have someone in their twilight years and they're struggling to stay alive," said Eric Cooper, president and CEO of the San Antonio Food Bank. "They are choosing between paying their bills and paying for food."

San Antonio has the second-highest rate of senior food insecurity among major metropolitan areas, according to a study from the American Association of Retired Persons. Food insecurity means that access to food is sometimes limited by lack of resources.

And the problem will soon become increasingly dire. The U.S. Census Bureau projects that Texas' population of people 60 and older will increase by 2 million between 2015 and 2030, jumping from 13 to 20 percent of the state population.

The growth has government agencies and nonprofits in San Antonio, some of which are already stretching out thin resources, scrambling now to prepare for the future.

"I'm a little bit worried about our ability to meet the growing need. It has been a big burst the past few years," said Sharon Baughman, CEO of Christian Senior Services, a nonprofit agency in San Antonio. "The resources are not going to be able to grow as fast as the Baby Boomers have grown. That's a major issue that has to be addressed."

James Ziliak, director of the Center of Poverty Research at the University of Kentucky, is one of the country's leading food insecurity researchers. He and others released a report in 2008 projecting that 9.5 million seniors would be food insecure by 2025, fueled by retiring Baby Boomers.

But Ziliak conducted the research before the Great Recession. When he updated his projections earlier this year, he found that 9.6 million seniors were already food insecure — over a decade ahead of schedule.

Other segments of the population have rebounded since the recession, but that's not the case for seniors. He hypothesizes it's because since the recession, "personal savings have been near zero and if they're on a fixed income ... Social Security isn't necessarily keeping up."

Ziliak also said that San Antonio's demographic makeup puts its seniors at risk for an even greater food insecurity backslide.

"Hispanics have a larger chance of food insecurity," Ziliak said. "That has real implications for Texas. Unless the economic status of Hispanics changes quite dramatically over the ensuing decades, that's going to keep upward pressure on this problem of food insecurity."

That makes groups like Baughman's, which runs the San Antonio Meals on Wheels program, even more vital to San Antonio. Her staff delivers meals free of charge to over 5,400 homebound seniors every year.

It costs about $1,300 for Meals on Wheels to feed a senior for a year. Thus far, the group hasn't turned away an eligible participant because of a lack of resources. But she's unsure if that will last, given the coming explosion of the senior population.

"I don't know how long we're going to be able to keep doing that. At some point you get maxed out, and I don't want to ever tell someone they can't be on our program because of the dollars," Baughman said.

But as their mobility decreases, some seniors rely on Meals on Wheels both for healthy food and for social interaction with the delivery drivers and volunteers. Social isolation increases the chances for food insecurity, according to Ziliak.

"This population certainly doesn't get the social interaction and attention that's been lost to them as they've lost their own mobility," Baughman said. "It is a very lonely feeling."

That's especially true in San Antonio, where it's challenging to traverse the city's sprawling layout without a car.

"If you do have mobility impairment, San Antonio's ability to get you around is pretty pathetic. In certain areas of the community, you risk your life crossing the street. The sidewalks are not what they need to be, our [public] transportation is not what it needs to be," Baughman said.

That can keep seniors inside and isolated, which has ripple effects on hunger and health.

"While the chances of being food insecure are lower if you're a senior, the health consequences ... are more manifest," Ziliak said. "You'll find significant effects of food insecurity on ... depression, diabetes, limitation in activities and daily living." 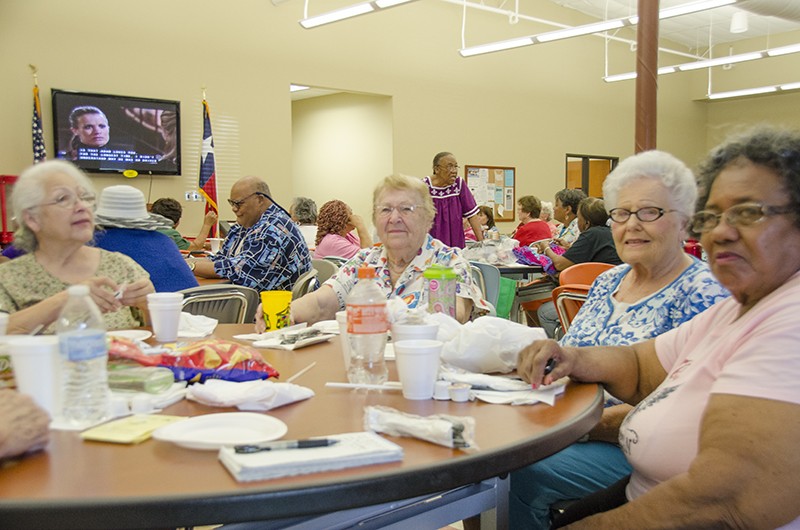 A potential remedy, Ziliak said, is to offer more meals in communal settings — something that San Antonio has emphasized by investing in senior centers.

The city operates eight full-service centers that are open for eight hours every weekday and 10 that are open for four hours. Dozens of other city-affiliated sites at senior apartments and community centers host meals and other events more sporadically.

The city offers free transportation to any senior within a five-mile radius of a center. But plenty of folks who live outside the radius still attend.

Gary Thayer, 63, is one of them. He takes two buses to get to the District 2 Senior Center, but he still comes every day it's open.

"It's better than sitting around watching TV like I'd do at home," Thayer said. "You've got a chance to meet different people and interact."

Thayer has come to the center for a little over a year. Before, he'd spend his time idly riding the bus around town with no destination in mind, just killing time.

The District 2 Senior Center, located near the intersection of W.W. White Road and Rigsby Avenue, sits in a quiet, nondescript strip mall on the East Side. But it's bustling inside, filled with over 100 seniors, many of whom come to the center every weekday.

The center opened in 2010 and doubled in size to 16,000 square feet in September 2014. In addition to the free daily meal, the center offers amenities such as various activities and classes, use of an on-site gym and a caseworker.

The city also broke ground on a new senior center in District 10 last year. The center will be the San Antonio's largest with over 25,000 square feet.

The centers also provide eligible seniors with a box of food every third Wednesday of the month. The contents differ each month — fresh fruits and vegetables, ground beef, chicken and juice are all staples. It's enough to make about 30 meals, although some seniors stretch it through an entire month.

Benjamin Holden relies on the service. He lives on $1,200 a month off Social Security, most of which goes to pay his trailer park's lot fees.

Holden, a 64-year-old Vietnam War veteran, said that making ends meet "would be tough" without the box of food. Most jobs are out of the question for him; he's worn out the cartilage in both of his knees, and standing for any length of time is painful for him.

"It helps a lot to have the food," Holden said. "It means I don't have to go without."

The food boxes come courtesy of Project HOPE, a program sponsored by the San Antonio Food Bank. The program provides free groceries to over 10,000 low-income seniors in the San Antonio area.

Cooper, the food bank's director, hopes to expand the program as the need rises for San Antonio seniors. The food bank feeds nearly 60,000 people in South Texas each week, a third of which are elderly.

"Being on a fixed income, relying on solely their Social Security which can be as low as $465 a month, it's difficult to pay rent, utilities, and healthcare costs and have money left over for food," Cooper said. "Ironically many of their prescriptions prescribe taking it with food, yet they can't afford one or the other."

Both Cooper and Baughman praised San Antonio's senior program. But like Baughman, figuring out how to meet a growing need keeps Cooper up at night.

"It's a work of faith. It's the belief that you're going to be able to meet a need that maybe logically and financially doesn't makes sense," Cooper said.

"The thought that there's going to be more seniors tomorrow than there were today, I know I have to educate the community ... so I can meet that upcoming need. I pray and I keep the faith that that's what happens," Cooper added.