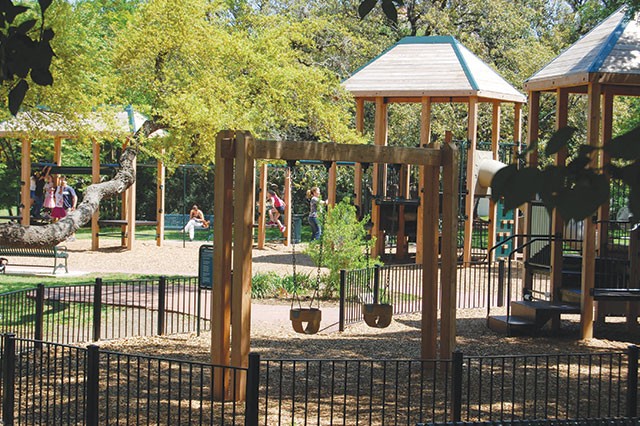 For anyone in charge of a child or two, knowing where to find the nearest playground is information as essential as the numbers for poison control and your pediatrician. (South Texas Poison Center: (800) 222-1222, just FYI)

The Parks and Recreation website is a fantastic resource. It has a full park directory with links to City, Downtown and county parks. Plus, there’s an interactive map, the Bexar County Park Locator. Navigating the search function takes some focus, but once you get the hang of it, you can discern which green spaces near you likely have a slide and swing set. This is crucial because, as some kids will tell you, a park without a playground is just a mean joke.

What the Parks and Rec doesn’t pinpoint, though, are the parks with shade. Many of the new parks that have sprung up have no trees or just saplings around the perimeter. So, come summertime at noon, the play structures are sizzling under the sun, and a slide can deliver a screaming lot of pain with third-degree burns on the back of tender legs. Hot rubber or metal swings are no fun, either.

So, here are just four great parks that have a fair amount of shady trees:

Phil Hardberger Park is one of the most popular parks in town and won Best Playground last year in the Current’s reader poll. The park has two playgrounds; the east playground is hands down the better spot for its shade and restrooms—case closed. There’s a separate play section for smaller tots, lots of picnic tables, a walking trail and a decent parking lot. Plus, there’s a merry-go-round.

Located in the Monte Vista Historical District, Landa Library was once a beautiful two-story home owned by Harry and Hannah Landa. After Hannah died, Harry donated the home and the surrounding grounds to the City, converting it to a library and playground in his wife’s memory. In addition to two age-appropriate playgrounds, one with a zip line, this park has thick green grass and fat, sloping trees for climbing. There’s also a special needs swing that all the kids love.

Comanche Park #2 is an older playground along the Salado Creek Greenway, leading to Southside Side Lions Park. There are plenty of old shady trees from the days our grandparents were kids. The play structures are sturdy and sizeable with a wall climber, a cable bridge and tunnel slides. (Not to be confused with Comanche Lookout Park, a collection of hiking trails located near Live Oak.)

Tucked behind Splashtown, this little-known park is certainly worth checking out. It’s shady with lots of space to run around, swings and two elaborate sets of age-appropriate play structures (ages 5-12 and 2-5).