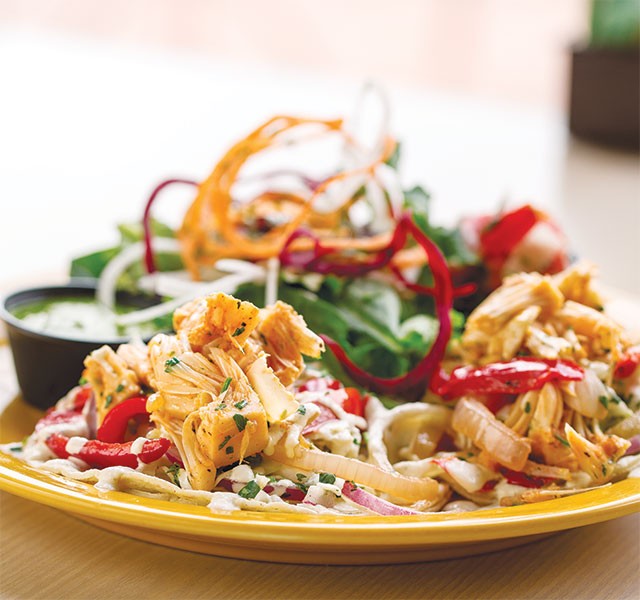 I don’t care for food that tries to be something it’s not. Gardein meatless products, while readily accessible and relatively cheap, only make me wish for the real thing. Thankfully, this isn’t the case at Señor Veggie.

The restaurant, owned by husband-and-wife team José and Tiffany Cruz, opened in mid-February to an enthusiastic reception. Needless to say, eating strictly vegan in San Antone is ridiculously difficult considering we’re (literally) big fans of anything cheesy, and even our beans have bacon in them. So when plans were announced for Señor Veggie in October, area vegetarians, vegans and veggie fans rejoiced. José, the chef behind the recipes, and Tiffany had already been longtime vegans when they first launched Señor V as a catering company and later as a booth at the Quarry Farmers and Ranchers Market where José’s take on falafel and tabbouleh were a welcome addition. The Cruzes have made the transition from caterers to restaurateurs almost seamlessly.

El Señor replaces Mr. Tim’s Country Kitchen, which relocated to La Vernia last fall, and the menus couldn’t be more different. The distinction extends to the location, which has undergone a makeover that ditched the pale blue exterior with its emblazoned Shiner Blonde bottle for a tangerine paint job and a mural depicting the Aztec god of maize. The interiors got some love as well, as the Cruzes and friends painted the dining room walls with bright shades of green, blue and orange and adorned them with local artwork. Its general vibe isn’t commercial restaurant, but rather a relative’s home.

Señor’s menu is comprised of popular items from the market and favorites the Cruzes have been cooking at home for years. Don’t let the moniker fool you—Señor Veggie is so much more than Mexican staples. The eclectic menu spans Mediterranean cuisine, Spanish noodle dishes and American café classics, divided into appetizers, soups and salads, sandwiches, bowls and entrees.

I chose the veggie street tacos ($8) for my first taste. The tacos were loaded with cabbage slaw, grilled onions and bell pepper, and a fresh pico de gallo; shredded jackfruit, the largest tree-borne fruit in the world, served as faux-chicken. As Tiffany explained when I ordered my tacos from the counter, the fruit’s flesh comes out in rosettes that, when sliced or shredded, resemble poultry. The fruit was prepared with a traditional marinade and the texture was similar to chicken or tender coconut. I could see how it might fool even the most discerning meat eater.

The two-taco plate was paired with a choice of either shoestring fries, soup, chef side salad or the veggie of the day—blanched broccoli with a lively Asian zing during my visit.

At dinner, the service was on point and our dishes were delivered fresh and hot, extra impressive considering I visited during a busy First Friday. We decided to give the poblano corn fritters a go. At first bite, the fritters were smoky and flavorful (with an addictive chipotle mayo), but the texture was on the doughy side. A rather large fritter was undercooked in a “molten lava cake” kind of way, which was a shame because I could have eaten an entire order.

A genuine hit at dinner came via my dining partner’s SV Burger—featuring a house-made black bean patty topped with guacamole and that seemingly crack-laced chipotle mayo. A fresh bun and equally bright fixin’s helped seal the deal on this satisfying must-have item. I’m normally a fan of shoestring spuds, but while the Señor fries are easy on the eyes, they’re difficult to eat—too crunchy to harpoon with a fork, too curly and thin to try wrangling one from the thicket of fries.

My choice for the night was the fidueá, which is quite similar to paella, but uses vermicelli noodles in place of rice. Laced with smoked paprika, the dish combined whole Kalamata olives and thinly sliced sautéed red peppers for a hearty and briny blend. Note: It tastes even better days later with added chicken (sorry, vegans).

Yes, Señor Veggie is stretching its legs from its early beginnings, but damn if they’re not making it appealing to chow down on vegan fare without loading up on overly processed patties. The eatery’s biggest success is how it’s introducing new ingredients and unfamiliar dishes with relative ease. If the packed house during First Friday is to be believed, San Anto’s ready for more.