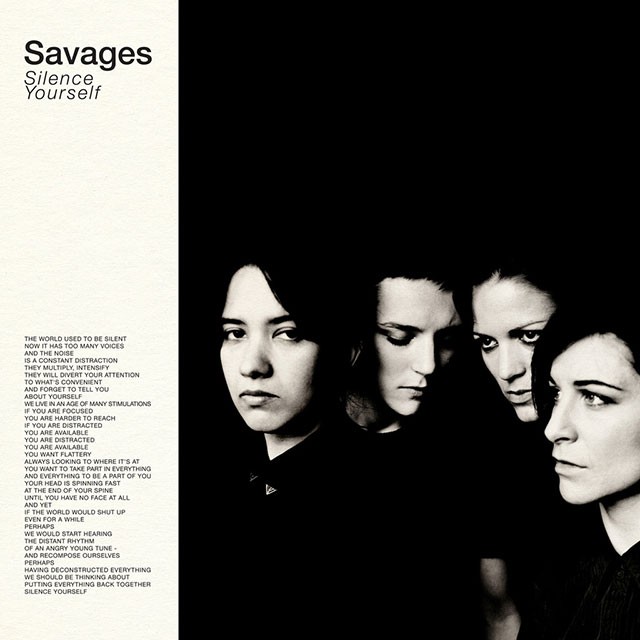 The dark songs come at you like a bulldozer and embrace you like a black octopus. Singer Jehnny Beth is a Patti Smith-meets-P.J. Harvey wailer; guitarist Gemma Thompson is a brutal executioner; bassist Ayse Hassan and drummer Fay Milton keep the ball rolling with often-weird time signatures, but you don’t even notice it. The English band has often been compared to Siouxsie and The Banshees and Joy Division, but I go way back: I have never heard this level of raw, aggression-with-a-cause since MC5. Savages, however, resemble the fab four; the CD cover art shows them a la Meet The Beatles and they’re fond of mantra-like repetitions, but they’re more “Helter Skelter” than “I Want to Hold Your Hand.” With Savages, you don’t hum — you scream. Call it enlightened darkness, but wherever the doomsday vibe comes from, it’s not a downer — it’s empowering. And the band means business. When they repeat “silence yourself” over and over on the title track, they don’t just mean your mind, but your cell phone. “PUT THAT SHIT AWAY! … MUCH LOVE AND MANY THANKS!” was the sign at one of their shows (the Yeah Yeah Yeahs have done something similar, let’s hope the trend continues). The album starts with an existential conversation between Gena Rowlands and Joan Blondell in Opening Night, John Cassavetes’ underrated 1977 masterpiece. “Are you coming for the ride? Are you coming?” asks Savages in the wall-of-guitar earthquake “I Am Here.” You bet I am, and you should be too — catch them live in October at Austin City Limits, Savages’ reportedly astounding live show will be the act to watch.