Savory Cocktails for Fall Foodies, and Where to Find Them in San Antonio

For some time now, sweet potato Jameson and other Irish whiskey have been popular in bars all over San Antonio. Since its conception in Southtown’s Bar 1919, it quickly spread as far north to bars like Edison Experiment and the Green Lantern. The slightly sweet, slightly earthy shot is perfect for keeping warm during colder months and its flavor profile pairs well with the savory menus that come out around the holidays.

The shot was just the beginning. It’s now dropped into Guinness or a similar stout creating a sweet potato bomb that’s chugged by industry folk and bar newbies alike.

Cocktails with a similar sweet, savory profile started filling menus in bars across the city, too. From pop-ups and craft cocktails bars in the downtown area, to restaurants as far as Boerne, all have a flavorful drink featured on their menu. Even pop-ups have gotten into the savory cocktail idea. The “Girl Gang” which hosts pop-ups every month at different bars around the city recently featured a drink called the Relax It’s Only Magic, which included Treaty Oak rum, lemon, and an ube (a purple yam) simple syrup.

If you are craving an earthy purple cocktail now, head over to La Roca Cantina, the menu features the Beet El’ Juice, a combination of reposado tequila, fresh lime and orange juices, and beet syrup for $9. Pro-tip: switch the tequila for mezcal to get a smoky flavor. For another earthy drink with a different flavor profile, try the Rocksteady (Jamaican rum, Cynar, oregeat, peach, and lemon). This cocktail is $12 and while it does take on a bit of a tiki profile, the artichoke of the Cynar gives it a savory and bitter taste at the end to balance the drink. 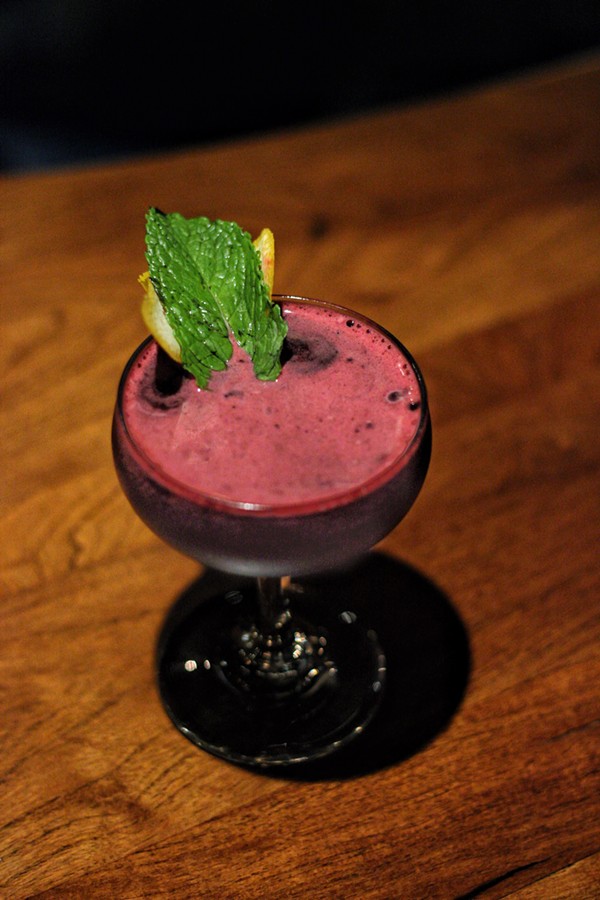 Craving more Cynar? That thirst can be satisfied with Lights Out in Marfa (featured above), one of the more popular drinks at Cured at the Pearl. The Light Out in Marfa (with Del Maguey Vida Mezcal, Luxardo Maraschino liqueur and Cynar) is a smoky, sweet, and bitter cocktail that is perfect for sipping on while enjoying rich charcuterie or eating a diverse Thanksgiving dinner. The drink will set you back $15, but going during happy hour knocks it down to $7.50 though, and as long you have these ingredients at home, the drink is fairly easy to make. It takes 2 ounces of mezcal, ¾ ounce of maraschino, and ¾ ounce of Cynar; stir and then garnish with an orange rind. If you can’t make it downtown that often, and tend to stay on the Northern side of town, you can head over to Peggy’s on the Green, just a short trip up I-10 and get the Old Timer (Punt e Mes, Cynar, Old Forester, lemon, sugar, soda, and angostura). The drink is a bitter twist on an Old Fashioned, since it features whiskey it’s the perfect option for someone who wants the flavor profile of the drinks the other bars have, but might not be too fond of mezcal and rum drinks.

If you want another savory whiskey cocktail to sip on during your own holiday meal, the Spruce, a lifestyle site, has a great recipe that is easy to make. Take 1 ½ ounces of Scotch, 1 ounce of red beet juice (score some at Revolucion Coffee + Juice), ¾ ounce honey and ¾ ounce of lemon juice, throw them into a shaker and then strain into a chilled cocktail glass. You can use a sprig of tarragon for garnish and it’ll really up your cocktail game impressing that grouchy relative you have to deal with over the holidays.