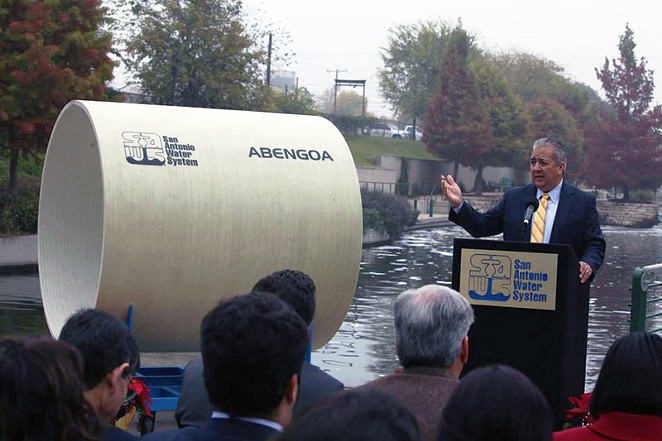 It's official, Garney Construction is now in control of the San Antonio Water System's plan to build the 142-mile Vista Ridge pipeline.

The SAWS Board of Trustees today approved the construction company as the new majority partner in the Vista Ridge project. Abengoa Vista Ridge, a subsidiary of the financially floundering Spanish company Abengoa, retains a silent 20-percent share while Garney Construction owns 80 percent of the project. The move comes after news broke that Abengoa is facing bankruptcy proceedings.

“Garney Construction has a strong history with SAWS and has been involved in this project since the beginning," SAWS CEO and President Robert R. Puente says in an announcement. "In stepping up to the lead position, Garney brings invaluable continuity and skill to the table.”

Even before the City Council vote to approved the $3.4 billion project in October 2014, it faced considerable opposition from community members, including concerns about rising utility bills that could increase burden on low-income and elderly SAWS customers, along with numerous environmental concerns, perhaps the strongest being an argument that the project will have a negative drawdown effect on the Carrizo-Wilcox Aquifer — where the water will be pumped from.

However, proponents of the project, which is spearheaded by City Council and SAWS, say the new water source is necessary to diversify the city's water portfolio and to meet the demands of an expected influx of new residents in San Antonio over the next few decades.