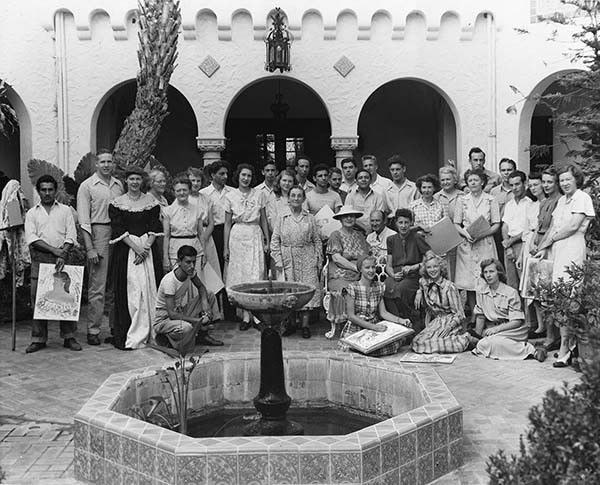 The San Antonio Art Institute may be fading from public memory, but its legacy shines on in the Southwest School of Art's effort to become the first independent fine arts college in Texas, and the internationally acclaimed resident artists' program at Artpace. While some memories are bitter, the SAAI served as the city's primary incubator for contemporary art for more than 50 years.

The SAAI fostered modernism by hiring many respected artists to teach its programs from the late 1920s to the 1980s, until a doomed attempt to establish a bachelor of fine arts degree combined with a faltering Texas economy led to bankruptcy in 1993.

In "School at Sunset Hills: San Antonio Art Institute Artists in the McNay Collection," on view through February 15 at the McNay Art Museum, curator Jackie Edwards examines a golden era from 1943 to 1953, when the school was housed in an aviary beside Marion Koogler McNay's mansion, known as Sunset Hills.

Mrs. McNay, through her contacts with the pioneering Los Angeles art dealer Dalzell Hatfield, invited many cutting-edge West Coast artists associated with LA's Chouinard School of Art to teach at the SAAI. Before her death in 1950, Mrs. McNay assembled one of the best collections of modern French painting west of New York. But she also avidly collected American contemporary art, and the McNay opened in 1954 in her mansion as the first private modern art museum in Texas.

Edwards says the McNay has from 80 to 100 works in its permanent collection by artists associated with the SAAI, but the cozy "Sunset Hills" exhibit focuses on fewer than 10. Many more years may pass before passions about the closing of the school will cool enough to allow the McNay to present a more comprehensive exhibit about all the artists who taught at the SAAI.

World War II caused classes to be suspended in 1942. Witte director Ellen Quillin persuaded Mrs. McNay to house the school on the grounds of her 23-acre estate. Mrs. McNay wanted the art school to be modeled on the Chicago Art Institute, which she attended, and requested that it be named the San Antonio Art Institute. The SAAI re-opened in a converted aviary on October 15, 1943, under the joint sponsorship of Mrs. McNay and the Art League.