Scorsese Outdoes Himself with ‘The Wolf of Wall Street’ 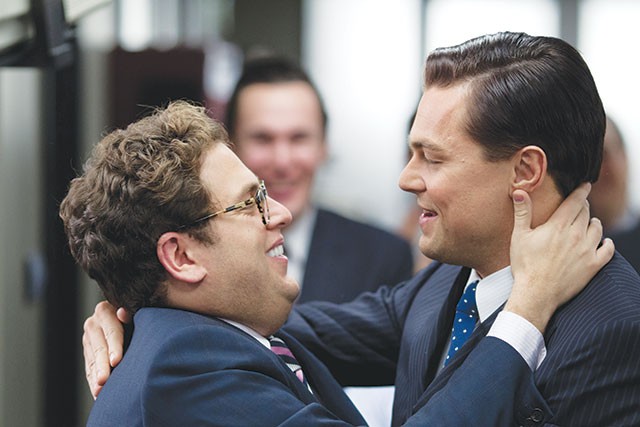 Only Martin Scorsese could’ve followed the magical Hugo with The Wolf of Wall Street.

In his new movie, Scorsese channels Jake LaMotta and Metal Machine Music-era Lou Reed, becoming a loud, raging bull not at all concerned with attention spans or other trivial things. He goes all out, and takes Leonardo DiCaprio with him to heights not seen since The Basketball Diaries. But here’s a real warning: If you’re in addiction recovery, stay away from this flick.

The movie, based on financial scammer Jordan Belfort’s 1997 book, is Scorsese at-large in a trip so wild it makes Goodfellas’ and Casino’s pace seem like an Ingmar Bergman movie. It’s full of tits and asses and coke lines and rolled-up bills; it looks and sounds like greed. The frenetic, non-stop barrage of pleasures shows you what we all know: Capitalism is a system in which a small-time stock broker who made millions by screwing thousands can get away with a slap on the wrist—Belfort (played sensationally well by DiCaprio) served less than two years in jail and has now reinvented himself into a so-called “motivational” speaker, after cashing in again with his book and movie rights. God bless America.

If I had to choose one song from the soundtrack to describe how the movie feels, I’d choose 7Horse’s “Meth Lab Zoso Sticker,” but even faster. It is a frontal attack that gives you little respite, a never-ending drumbeat that glues you to your chair and slaps you in the face over and over again. But don’t be fooled by the cascade of cocaine, Quaaludes, money and honey (before the first hour passed, I was ready to take a celibacy vow)—when Scorsese steps on the breaks, the film keeps moving and you realize that the greed theme is only an excuse for the director to film four or five of the best scenes he’s ever done.

The Wolf of Wall Street is a movie of couples: DiCaprio and Matthew McConaughey (still looking as he did in Dallas Buyers Club, he has a small but Oscar-worthy role as the unscrupulous stock broker who first trains Belfort); DiCaprio and Jonah Hill (as Donnie, his first partner in crime, especially for a scene we’ll talk about later); DiCaprio and Kyle Chandler (as the FBI agent who finally nabs him, his scene has the same type of nervous, hateful laughter as that of Christopher Walken and Dennis Hopper in True Romance) and DiCaprio and Aussie actress Margot Robbie (as Belfort’s second trophy wife, she goes from blonde bimbo to Rosie Perez in Do the Right Thing without changing skin color). Together, these couples put on a dialogue feast for the ages, courtesy of Emmy-winning screenwriter Terence Winter (The Sopranos, Boardwalk Empire). To paint the movie with the color of money, Scorsese hired Mexican DP wiz Rodrigo Prieto (Amores Perros, Brokeback Mountain), completing a perfect package of great acting and top-notch production value.

Belfort’s only hope to remain “legal” required someone with a European passport to be able to deposit his millions in a Swiss bank account managed by monsieur Jean-Jacques Saurel (the Oscar-winning Jean Dujardin, The Artist). So, in a display of casting genius, Scorsese cast Joanna Lumley (Patsy in Absolutely Fabulous) as his wife’s refined Aunt Emma, and she and DiCaprio have another memorable scene on a park bench.

But the best scene you will see all year is when Belfort (DiCaprio) and Danny (Jonah) get high on expired Quaaludes and descend into what Belfort calls “cerebral palsy mode.” The long, terrifyingly hilarious scene is among the best-edited work Scorsese has ever done.

Yes, The Wolf of Wall Street is overlong (I get it, Marty, too much drugs and unlimited unprotected sex is bad for you), over-the-top and self-indulgent. But when those indulging are Scorsese and his troupe of freaks, you could do a lot worse than taking that exhilarating three-hour trip.

The Wolf of Wall Street