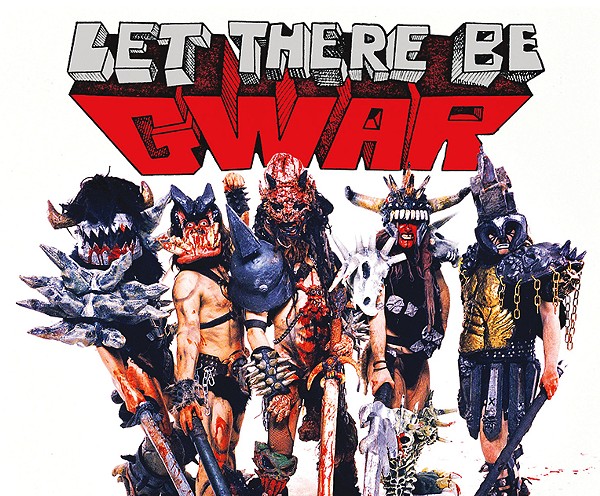 According to Snopes-verified, publicly notarized rock 'n' roll legend, members of KISS had vials of their own blood drawn to mix into the red ink used to print the first issue of their official Marvel comic book.

Presumably most people who hear that story say "gross," while potential KISS Army regulars say "awesome." An even smaller subset of metalheads, however, say "Why just their blood?"

For those who dwell in the sweet spot of an unholy Venn diagram of gorehouds, Lovecraft freaks and collectors of dead baby jokes, Let There Be GWAR. The new book, compiled by Bob Gorman and Robert Gastman, offers an extensive history of the band, suitable for both the uninitiated (a sometimes condescending descriptor that's apt here because GWAR fandom is like undergoing nightmarish hazing for a cult you will never be permitted to join) and the bohab (the extremely inside and condescending name the band has for its hardcore fans; it basically means "an unbearably boring person").

Problem is, GWAR has at least two separate histories. In the version chronicled in the band's batshit albums and long-form music videos (1992's Phallus in Wonderland, was, seriously nominated for a Grammy), GWAR is a band made up of Lovecraft's horrific godlike Old Ones. Banished to Earth, these beings killed off the dinosaurs (body parts of which can still be seen incorporated in the band's elaborate, cartoonishly horrific costumes), accidentally created the human race by having sex with apes and then became frozen in Antarctic tombs (à la At the Mountains of Madness) only to be thawed out thousands of years later by Sleazy P. Martini, a record exec whose name speaks for itself.

In the other version, the one chronicled in Let There Be GWAR, the band was formed in 1985 as a joke by bored Richmond, Virginia, art-school dropouts as an opening act for punk band Death Piggy. Not surprisingly, GWAR — whose schtick even that early on included elaborate costumes, an 8-foot-tall T-Rex puppet named Gor Gor and fire extinguishers repurposed to spew fake blood, puke and every other bodily fluid forbidden from polite conversation onto the audience — soon upstaged Death Piggy entirely. An almost literal cult act was born. As guitarist Mike Derks (aka Balsac the Jaws of Death since 1988) puts it: "Even at Alice Cooper concerts people wouldn't actually get wet. And KISS concerts, you know, Gene Simmons would spit blood but not on the audience."

Where some people see a small mercy, others see an opening in the market. Discussing the economics of shock rock is an almost surreal incongruity but for a biography of a band known for graphically disemboweling religious and political leaders in effigy onstage, the tone of LTBG becomes surprisingly button-down as it progresses. While earlier chapters detail the insanity and desperate poverty of the band's formative days, obsessively chronicling GWAR's constant lineup changes (the included "Family Tree" includes eight different incarnations of the band between 1985 and 1990: one member left to start a dry-wall business, one went to prison for stabbing a guy, etc.) and stage show innovations (ingredients for various forms of fake gore are listed, even the exact specifications for some of the carts used to transport the props are included), later chapters describe shareholder meetings and viral videos and their world tour diary is a dry summary that reads like it was nervously picked over by publicists and attorneys. Onstage, GWAR's insatiable love of crack was a running gag, but out-of-costume debauchery is only hinted at, up to and including the death of GWAR's frontman and only constant member David Brockie, aka Oderus Urungus, officially ruled an accidental heroin overdose. The copy of the book provided to the press skips from page 317, in which group members recall their concern about Brockie's odd offstage behavior and possible "drinking" problem, to page 323, describing the band's first gig with Mike Bishop (aka Blothar) as the new frontman following Brockie's death.

But even on the pages that haven't been rescinded due to the ongoing million-dollar lawsuit filed against the band by Brockie's father (the review copy was also missing pages in the beginning, in which, presumably, the actual idea for the band is suggested), Brockie's absence is very apparent. Fans of the band will love the extensive scrapbooking of the band's history and fans of the idea transgressive comedy/music/art who'd prefer to stay clear of the spew itself can learn all about GWAR, the World Maggot, the Slave Pit (the art collective that makes GWAR's costumes and props, sort of like Jim Henson's Creature Shop if Jim Henson were H.R. Giger) and the fascinating story of offshoot band X-Cops without getting their shirts fake-bloodied.

Potential bohabs who aren't afraid to get their brains dirty — fans of Metalocalypse, people who laugh at Slayer lyrics or count Tom Savini among their favorite artists — should probably start by bowing down to the Scumdogs of the Universe themselves.

Let There Be GWAR