There's nothing like a trip down to South Padre Island to do a little fishing, but as any angler knows, losing tackle to the sea can be frustrating and costly.

However, those seemingly petty nuisances can have fatal consequences in an ecosystem that is teeming with sea life. Take what happened yesterday near South Padre Island, when a team from SeaWorld San Antonio, SeaWorld Orlando and the Texas Marine Mammal Stranding Network were finally able to capture a dolphin who has been tangled in three pounds of monofilament fishing line, lead weights, hooks and other fishing gear for weeks, likely saving the cetacean's life.

Scarlet Colley, a longtime Port Isabel resident who has monitored the pod of dolphins that live around South Padre Island for two decades, first spotted the endangered dolphin, who has been named Tango, a few weeks ago. "Every day we see her slowly moving around begging for fish from fishing boats until she can be rescued as fishing on her own is difficult for her to move around," Colley wrote on a gofundme page set up to raise cash for the Texas Marine Mammal Stranding Network's effort to save Tango. 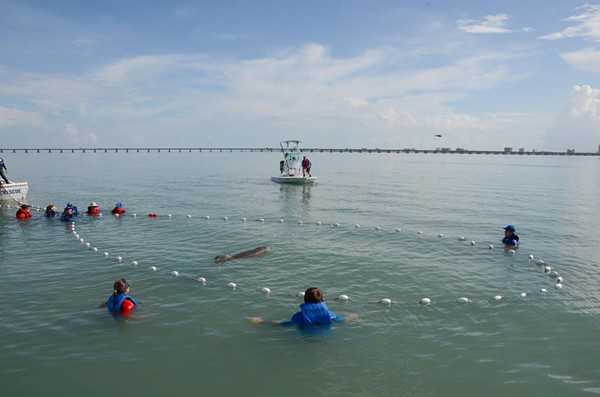 Feeding dolphins is extremely dangerous for the species because they are incredibly intelligent and learn to associate people with food, placing them in danger of boats and fishing gear. And rescuing the tangled Tango was no easy feat. "This will involve bringing in boats, vets and rescue specialists," Colley wrote. "Your donation will help cover the costs to save Tango as boats have to be brought in from as far away as Florida that specialize in safe marine mammal rescues."

The efforts paid off. The team was able to catch Tango, remove the fishing gear, provide medical care and return it back to the wild all on Monday morning. "Tango has become a bit of a local celebrity as the community pulled together on his behalf but it will be important that the dolphin be left to feed naturally in the wild and not fed by humans," the Texas Marine Mammal Stranding Network wrote on Facebook.

And the more than $5,000 Colley raised, two grand passed her goal, will likely help other dolphins who find themselves in dangerous circumstances. "This money not only helped Tango but the many other dolphins that the Texas Marine Mammal Stranding Network helps to save. Some that require day and night care for weeks and sometimes months," Colley wrote. "Tango was successfully rescued, detangled of many pounds of fishing line and in good enough health to release. This is our third dolphin that they have come to rescue and all are living healthy in the Laguna Madre Bay of South Padre Island."