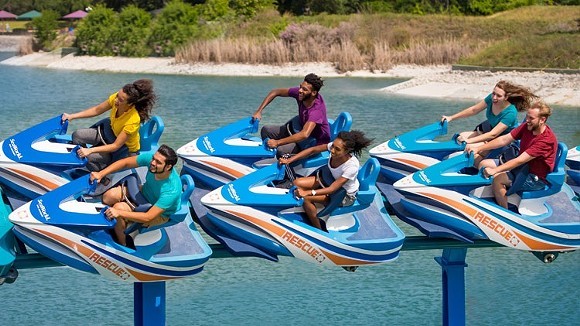 In recent years it looked like SeaWorld would finally turn the corner on its long, trouble-filled path to recovery, but then the pandemic hit and, like every other theme park, the company was forced to shut down for months. Now, as the Orlando-based theme park chain looks to recoup some of its lost revenue, they’re copying a recent strategy that has proven successful for competitors Six Flags and Cedar Fair.

In 2018, Six Flags began operating its flagship Magic Mountain park on a year-round schedule. Within two months, the company was reporting the trial was a success, and similar schedules would soon be rolled out to other parks. Six Flags Over Texas moved to year-round operations at the beginning of 2020. Cedar Fair’s Knott’s Berry Farm has always operated on a year-round schedule, sans Thanksgiving and Christmas Day, and rumors persist that other Cedar Fair parks, such as Carowinds, may soon join it.

Herschend’s Dollywood and Silver Dollar City are also both rumored to be eyeing year-round operations. Like Cedar Fair, Six Flags and SeaWorld, Herschend has seen massive success with its holiday offerings pushing the park calendar well into the winter season, meaning the resorts are only closed for a handful of weeks each year.

Bill Zanetti, a theme park and attractions industry expert who teaches at the University of Central Florida’s Rosen College of Hospitality Management, explained that year-round operations have multiple benefits for park operators.

“With seasonal parks, you have to fire everyone at the end of every year and pay unemployment. Then you re-hire them the next year. It’s actually quite the process,” he said in an interview with Orlando Weekly. “You will have a better quality of staff if you can keep the same people year-round, and because you know you’re going to keep those employees for a long time, you’ll be more willing to invest in their future via training and other programs.”

He went on to point out that the majority of parks that operate year-round are in larger urban areas with climates that are conducive to it or that have the budgets to ensure operations are affected by the winter climate.

“Parks sitting vacant in the winter only makes sense in very cold climates. If it’s warm enough to have very mild winters, you can operate year-round. … Six Flags Great America outside of Chicago is a seasonal park that gets horrible winters, for example. They have to replace the palm trees in their water park every year. [But] Disneyland Paris operates year-round, and it even snows there. I’ve been to the park in the snow; it was actually really fun.”

Zanetti pointed to the seasonal offerings as a prime reason why more parks are shifting to year-round operations. “Holiday festivals celebrating Halloween and Christmas have been a staple for most parks, and many seasonal parks now close after New Year’s Day. Those holiday celebrations extended operations from Labor Day to much later in the year. As long as your park is prepared for the weather (you need to have enough indoor attractions), you can operate in moderately cold conditions.”

Switching from seasonal to year-round operations does have its drawbacks. Typically, the off-season, when parks are closed, is when required maintenance and/or major construction happens. Zanetti also noted changes in financing. “The biggest concern is probably restructuring finances and schedules. It’s not just for employees either. The maintenance schedules for attractions need to be adjusted, not to mention the mechanics will have to adjust to the fact that they won’t have months at a time to work on attractions when they are closed anymore.

“Another big thing is getting your guests to remember that a park is open when previously it wasn’t. That’s a whole marketing campaign on its own. You also need to be sure you have made operational guidelines for operations in different weather conditions. For example, you would need to figure out how to operate after it snows if you’re in a cold environment. There are also some liabilities switching from a seasonal staffing operation to full-time staff, so that would need to be considered as well.”

Despite these concerns, SeaWorld San Antonio’s move to year-round operations has been lauded as a step in the right direction for the company as it is thought that it will help drive more annual pass sales. SeaWorld paired the operational announcement with one regarding a new annual pass deal. SeaWorld has seen success in recent years by focusing on locals, including in the weeks since reopening post-lockdown.

The move in San Antonio means Busch Gardens Williamsburg and Sesame Place Pittsburgh are the only major SeaWorld parks not operating year-round.

This story originally appeared in the Orlando Weekly, an affiliated publication.