SeaWorld to End Its Inhumane Orca Show ... In San Diego, No Plans for SA 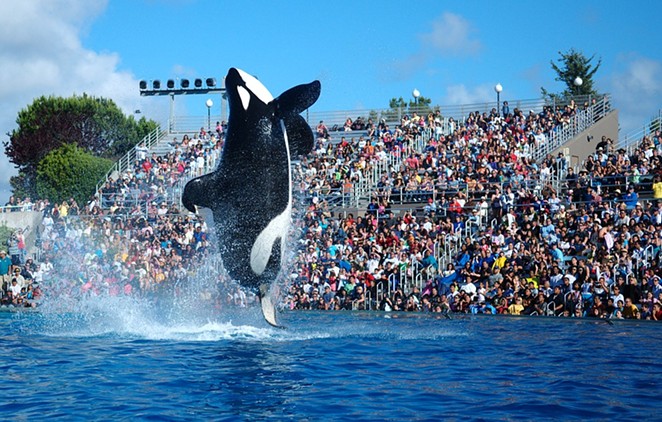 A SeaWorld spokesperson provided the Current with a statement to clarify its plans for the San Antonio orca show:

SeaWorld announced plans to phase out its live orca show in San Diego and replace it with a "new orca experience," the San Diego Union-Tribune reports.

In its place would be a new orca experience debuting in 2017, described as "informative" and designed to take place in a more natural setting that would carry a "conservation message inspiring people to act."...The plan to gradually phase out the Shamu show comes amid efforts at both the state and federal level to clamp down on SeaWorld by ending the captive breeding of orcas, which would effectively bring to an end the parks' theatrical shows.


Those efforts to "clamp down" on captive orca breeding  include the Orca Responsibility and Care Advancement (ORCA) Act, introduced by in Congress by Rep. Adam Schiff (D-California). The bill, which outlaws the capture, breeding and importing of orcas for the purpose of public exhibition, would “phase out the captivity of orcas so that their display ends with this generation.” The legislation does not call for the release of captive orcas in the wild, likely because the mammals would not fare well after a lifetime of in enclosed tanks. The company has vowed to fight recent ban on orca breeding in captivity the California Coastal Commission, according to the New York Times.

Future plans for the orca shows at SeaWorld's parks in both Orlando and San Antonio are unclear. We reached out to SeaWorld for comment. Its spokesperson directed us back to the company's press release, which does not address plans for SeaWorld San Antonio or SeaWorld Orlando.

SeaWorld has seen both falling revenue and attendance in light a public backlash in response to the 2013 documentary Blackfish. The film, which focuses on 32-year-old orca Tilikum who has killed three people, is a damning exposure of SeaWorld's treatment of its orcas and a condemnation of orca captivity. The controversy resulted in the resignation of SeaWorld's CEO.

SeaWorld took months to acknowledge the film had an negative impact on its bottom line. Since Blackfish's release, the company has engaged in a calculated (and shady) PR campaign to discredit both the film, its filmmakers and former SeaWorld employees involved with the production. An anonymous Texas woman recently filed suit against SeaWorld Entertainment Inc. because her voice was heard on a video recording used to discredit former orca trainer John Hargrove, who was critical of the company and its practices in the film.