See Kawhi Leonard on the Cover of this Week's Sports Illustrated 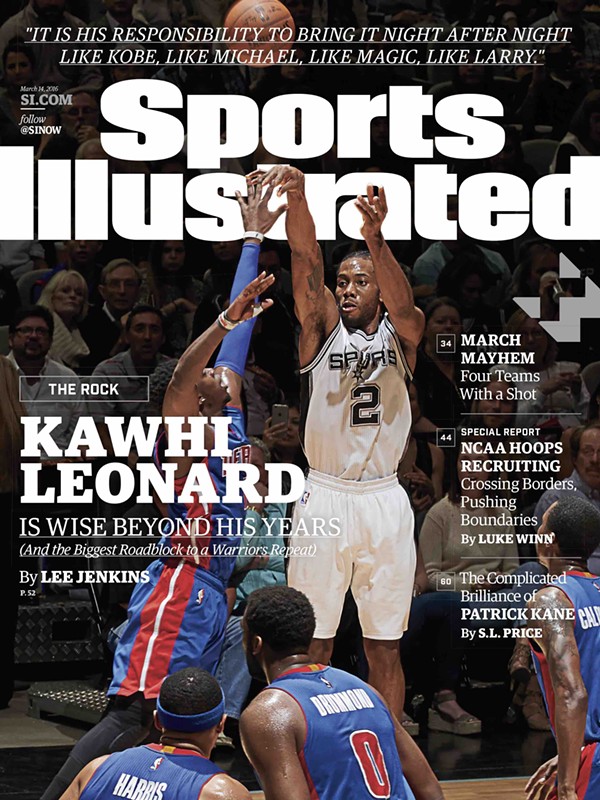 With a bold declaration from Sports Illustrated calling Kawhi Leonard the biggest roadblock to a Warriors repeat, the popular magazine has placed the young Spur on its newest issue that hit stands today.

Sports Illustrated Senior Writer Lee Jenkins features Leonard in an in-depth profile exploring the cool calm that is Leonard, according to a press release.

With insight from Coach Pop, "Jenkins tells the story of how Leonard developed into one of the NBA’s most dominant defenders and how he could provide the Spurs with the key to challenging the seemingly unbeatable Golden State Warriors in the quest for the NBA’s crown."

Look for comments from Spurs Tim Duncan and David West, from the Lakers' Kobe Bryant, from Clippers Guard J.J. Redick and from Spurs coaching staff and general manager R.C. Buford.

Here are a few quotes Sports Illustrated sent us from the story:

Popovich on his hesitation after the Spurs sent George Hill to Indiana for Leonard on draft night: “We were all looking at each other like, Are we really going to do this? We were scared s‑‑‑less. We don’t know this kid. He’s not a shooter. He’s not a scorer. He’s not a perimeter player. He’s a big guy who can rebound.”


On first meeting Leonard: "He was as serious as a heart attack."


On his defensive preparation: “I look at film, but more than watching individual players, I’m trying to watch a team’s whole offensive scheme. I’m trying to know their tendencies so I can . . . guess. That’s what it comes down to, really, making the best guess. I’m trying to change up their scheme.”


Spurs GM R.C. Buford on Kawhi’s impact on the organization: “He changed the course of our organization… He gave us a second wind. He was the breeze in our sails.”