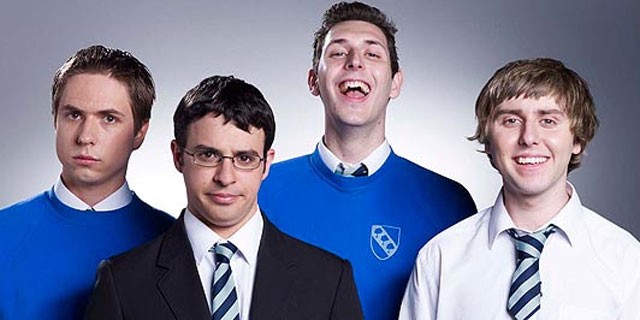 The Inbetweeners (9:30pm Mon, MTV)
Based on a British series, The Inbetweeners puts its finger on high school’s “in-between” cohort. Our four male heroes fit somewhere in between the lowest and highest social strata, and they’re forever attempting to boost their status. These attempts inevitably end in humiliation, making them the object of derision for the jocks and popular girls. If you think you’re the type who never laughs at an ill-timed erection in a teen comedy, you might have to rethink your self-image after this hilarious new series.

Narrator Will (Joey Pollari) has transferred to public school because of bullying at his prep academy. He falls in with Jay (Zack Pearlman), Neil (Mark L. Young), and Simon (Bubba Lewis), who try to look down on him but ultimately can’t because they’re so lowly themselves. The four of them spend their time trying to seem cool, even to each other. Jay tells unlikely stories of having sex and taking heroin; Simon insists he has a chance with a beautiful classmate; and Will denies he was bullied at his previous school, in spite of a haircut and blazer that give it all away.

The stars manage to remain likable even while portraying losers. And even within this farcical universe, they create an amazingly realistic vision of nerd society.

I mean, I think it’s realistic. Based on what I, you know, heard about nerds back in high school.

Inocente (9pm Fri, MTV)
This poignant documentary profiles a 15-year-old girl living the life of a homeless, undocumented alien in San Diego. That sounds pretty dark, but Inocente herself is determined to fill the world with color. She’s driven to make art, and her bright, hopeful paintings have earned her a gallery show that serves as the film’s centerpiece.

In her fanciful face paint and quirky clothes, our heroine is articulate and likable, emphasizing the positive. Sadly, that’s not always possible for her. A harrowing domestic life (homeless shelters, abusive parents) has led to confusion, guilt, and suicidal thoughts.

What’s saved her is an extraordinarily rich interior life. Inocente has a direct pipeline to her unconscious, and she lets it flow right onto her canvases. “If I didn’t have silly dreams,” she says, “I’d be totally depressed.”

Let’s hear it for silly dreams.

Copper (9pm Sun, BBC America)
BBC America’s first original scripted series appropriately mixes British and American elements. Irish immigrant Kevin Corcoran (Tom Weston-Jones) works as a detective in Civil War-era Manhattan, which has the lawless feel of the Wild West. In the pilot, Corcoran strikes avenging-sheriff poses while investigating the brutal rape and murder of a little girl. He also broods about his wife’s disappearance and his daughter’s death.

Copper finds some good ways to distinguish itself from the pack. The setting is fascinating, evoking a New York City of muddy streets and whinnying horses. Corcoran’s two Civil War buddies — an African American physician and a rich ne’er-do-well — provide entrée into Manhattan’s emerging black community and the sinister enclaves of Fifth Avenue.

Given such promising elements, I regret that Copper resorts to cheap titillation in its plotline about sex with little girls. That’s not a good way to distinguish yourself from the pack.

Flip Men (9pm Sun, Spike)
In this reality series, profit-crazed Doug and Mike buy broken-down houses, fix them up on the cheap, and flip them. I don’t usually get much pleasure out of watching someone rewire a house, but it helps that Flip Men finishes its renovations in a brisk 30 minutes (compare to Bravo’s hour-long house-renovation shows), and that Doug and Mike go about their work with nutty intensity.

The one thing I don’t understand is why Mike talks so loudly in his on-camera interviews. It’s possible to make a profit while speaking in a normal tone of voice, dude.

Major Crimes (9pm Mon, TNT)
Though I praised The Closer’s series finale last week, I admit that Kyra Sedgwick’s intensity could be insufferable at times. As deputy chief of an LAPD homicide division, she always turned it up to 11 — crying, carrying on, tearing suspects a new one. But now we get to see what The Closer would have been like without Sedgwick around to make trouble. Major Crimes is a spinoff series with the same setting and characters, except that Mary McDonnell takes over for Sedgwick.

In contrast to her predecessor, McDonnell is a blank. She speaks in a monotone and registers no convincing human emotions. This week’s episode focuses on the power struggle between her Capt. Raydor and G.W. Bailey’s Lt. Provenza, which has all the urgency of a bureaucratic spat.

What I wouldn’t give right now for some insufferable intensity.