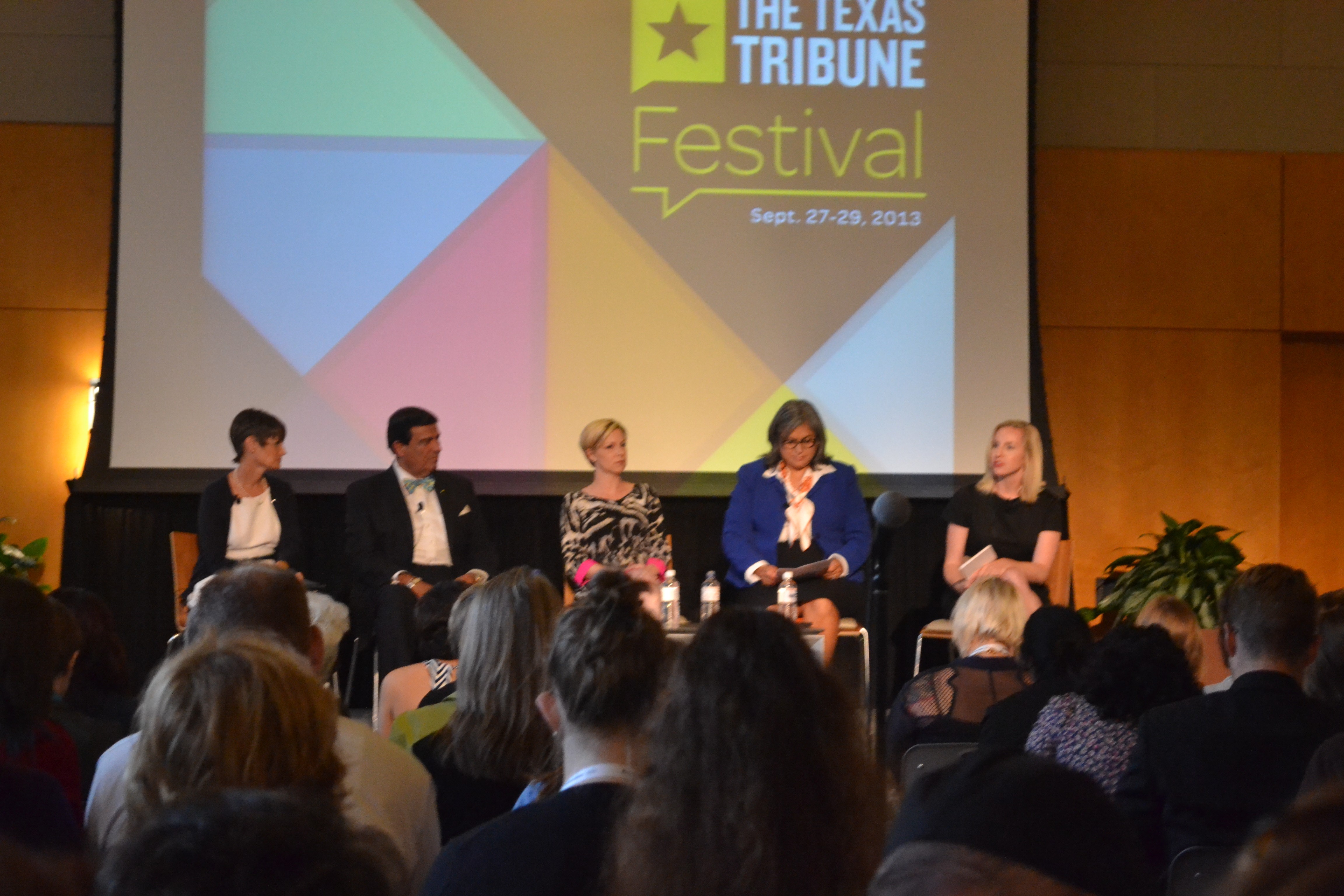 Sen. Donna Campbell (R- New Braunfels) sits on a panel about abortion care in Texas with other legislators at the Texas Tribune Festival. Photo by Mary Tuma

At the state politics-centered Texas Tribune Festival this weekend, Campbell sat on a panel with Sen. Eddie Lucio (a Democrat from Brownsville who supported the bill), Sarah Davis (a Republican from Houston who opposed it) and Rep. Jessica Farrar (D-Houston), a staunch opponent of the legislation.

The session, titled "Abortion and Women's Health: What Now?" amounted to a relatively tame microcosm of the debate that waged on the House and Senate floors over the bill this summer– Farrar and Davis refuted the necessity of the legislation, claiming it had little to do with protecting the safety and health of women and rather, was merely an ideologically motivated bill meant to reduce and ultimately, eliminate abortion access. As Farrar put it bluntly, politicians pushing the legislation were just looking to “establish a name for themselves.”

Nothing funny about that. The laughs came roaring in, though, when Campbell tried to refute those intentions as well as the bill's effects, saying “nothing in this legislation would shut down abortion clinics.” The audience at the non-partisan event erupted into a loyal comedy club crowd. That's because the legislation is heavily predicted to close all abortion clinics west of I-35, leaving just five clinics to service the entire state, according to medical professionals and reproductive health care leaders. Strict requirements, like hospital admitting privileges for abortion doctors and expensive mandatory upgrades, are forcing some clinics to close in anticipation. Campbell and other anti-choice colleagues steadily deny this will be the outcome, with no factual data to back up their claims.

Campbell received another roll of laughter when she tried to dispel allegations of ideological intentions, saying motivation behind the bill had nothing to do with, “political gain.” Those who sponsored and supported the legislation (largely conservative Republicans) fended off dozens of amendments that sought to increase funding to sexual education and adoption services, signaling a disregard for policy that would actually help prevent abortion.

Among other things, the law seeks to bring abortion clinics up to the same standards as Ambulatory Surgical Centers– a requirement that could cost up to $4 million and, due to those high costs, would effectively shutter the majority of clinics in the state. The changes include wider hallways and janitor closets and are described as medically unnecessary for the largely non-invasive procedure by health care professionals. While legislators like Campbell continually argue the provision would help the safety of women, no scientific proof has been delivered to validate why these changes are necessary.

Deciding to jump in the ring during a Q&A session, the Current asked Campbell to provide at least one concrete, empirical piece of evidence to back up how women’s health and safety would improve as a result of the surgical center requirement. Expected to have such a devastating and widespread negative effect on women's access to abortion, it seems reasonable for a co-author of the legislation to be able to describe a scenario in which ASCs were necessary or safer than abortion clinics. Campbell said installing "air filtration systems" decreases the risk of infection. That may be true, but it is not a specific example grounded in real life. Perhaps she didn't hear the question correctly? When pressed once more by the Current to actually provide a detailed instance, she simply said, “there is literature” out there (generating laughs from the audience again) and concluding with a “there are examples” before she cut the conversation off, still unable to provide any evidence.

Amid the snickering, the scene was far from comedic. It served as a reminder that the anti-choice effort to restrict abortion access in the name of women's health appears so thinly veiled, even the public can’t help but literally laugh in its face.