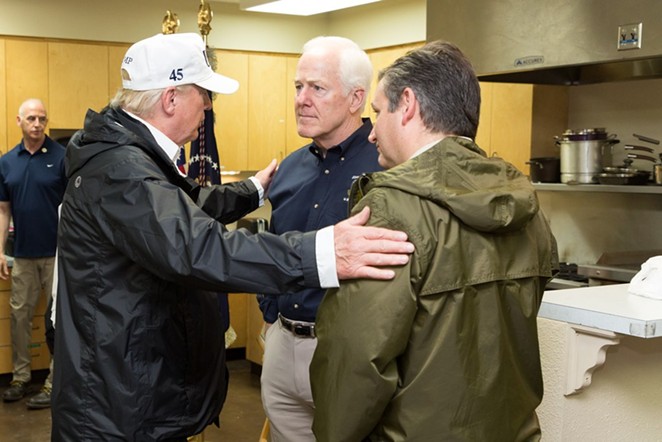 Facing what's likely to be his toughest reelection fight, Sen. John Cornyn may not be comfortable being known as President Donald Trump's BFF.

A day after Donald Trump Jr. shot out a fundraising email blast calling Cornyn his pop's "biggest ally," the Texas Republican did a little editing to throttle back the hyperbole, the Dallas Morning News reports. A version of the email sent out Tuesday by Cornyn's office altered the message to call the senator "one of" the president's biggest allies.

"I frankly don't think it's a big deal," Cornyn told the Morning News.

To Cornyn's point, the tweak was minor. But it does point to the tightrope he's now trying to walk. Trump is extremely popular with the Republican base, but recent trends suggest that getting elected to statewide office in Texas may be trickier than just appealing to the base with the same ol' God, guns and guts rhetoric.

No fewer than seven Democrats have thrown their hats into the ring to challenge Cornyn, who — speaking of God — has to be praying 2020 doesn't hold a replay of the nail-biter of a race fellow GOP Sen. Ted Cruz faced in 2018. Cruz won with less than 51% of the vote — the shittiest showing of any Republican running for statewide office here in the past 25 years.

Cornyn himself made headlines late last year when he said the results show Texas is "no longer reliably red."

Naturally, Democrats pointed to the edit of the fundraising letter as a sign of Cornyn's willingness play chameleon to save his political skin.

"Texans see right through Cornyn's political charade trying to draw contrast with Trump," Abhi Rahman, spokesman for the Texas Democratic Party, said in an emailed statement. "The question now becomes, if John Cornyn is willing to walk back on who he is and his record purely to score political points, then what exactly is he willing to stand up for?"