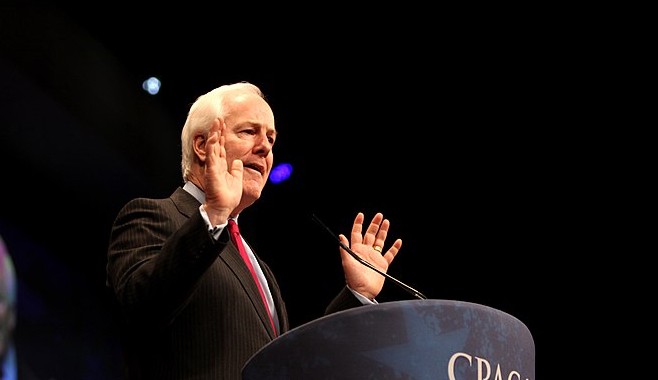 It sure looks like Sen. John Cornyn of Texas just wants this election-year pandemic thing to go away.

After glibly tweeting "Be smart; don't panic" and sharing a photo of a Corona beer, then falsely claiming we're not sure whether kids can catch COVID-19, the three-term Republican ran a digital ad over the weekend playing up his efforts to make schools safe during the pandemic.

Here's the problem with that new spot: rather than showing an actual Texas classroom, it uses stock footage of a school in Estonia, a European country that's avoided the worst of the pandemic, according to a new report by Salon.

The Estonian footage is inserted between clips of a blonde mom telling viewers she wants her kids to learn in a classroom "the sooner the better" — but only if they're not at risk.

After the safe-looking footage of the Estonian classroom, where a young teacher walks by her students' desks, the woman concludes that "John Cornyn gets it. He got money right to the local school districts so they could provide a healthy environment.

Salon points out that Estonia had just one-third as many COVID-19 cases in total as there were new cases in Texas on August 18 alone, according to the Johns Hopkins Coronavirus Resource Center data.

What's more, Cornyn supported a Senate bill that would offer special funding for educational institutions but withhold the majority if schools don't conduct in-person classes, Salon also noted. Public health officials have warned that still uncontrolled COVID-19 spread makes it too dangerous to open schools in much of the country.