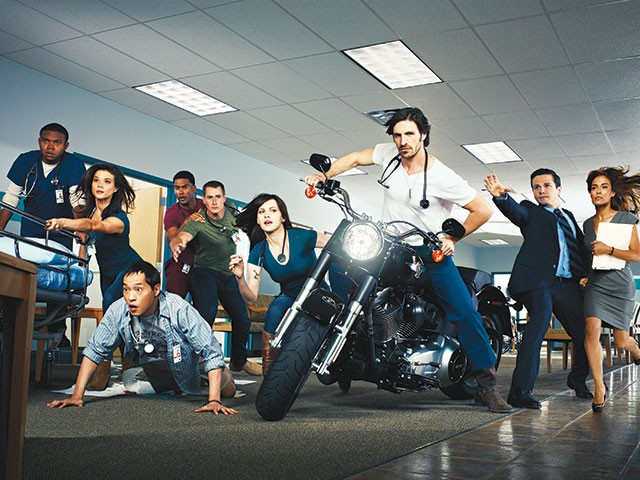 I imagine the NBC boardroom meeting that green lit The Night Shift going something like this: A room of pasty executives throw darts at program genres they’re currently lacking. The richest exec nails Medical Drama, and they move on to untapped settings, tossing interns at a giant, Velcro map of America. The hottest intern lands within the 1604 loop—the city on the rise! What aim! Champagne is popped, hard-earned naps are taken and Jeff Judah and Gabe Sachs of Freaks and Geeks are tapped to pen the unfortunate thing into existence. And with that delicate developmental science, San Antonio receives its first national TV show since Nickelodeon’s forgettable The Brothers García (2000).

Premiering Tuesday, May 27 at 10 p.m., NBC’s The Night Shift is a languid effort across the board, a high-fructose filler for that tricky slot between prime time and late night. The premise—anything can happen on the night shift!—drowns out any space for original characters or foundation of its SA setting, settling for a poorly paced slew of action sequences to drive the 44-minute pilot.

In the first six minutes alone, the writers have already packed in a PTSD flashback, a biker-beaten doctor in the county drunk tank, roadside surgery on a tree-impaled motorist, butthole jokes and a dying baby. So when an impatient, Tom Arnold-looking motherfucker explodes on a nurse, screaming to be treated—“I said now bitch!”—improperly revving up the energy like a driver new to manual shifting, I can’t help but laugh at the clutter.

The Night Shift’s characters aren’t subsidizing the lack of plot either. Like the scrubs they’re clad in, the staff that populate the fictional San Antonio Memorial Hospital are sanitized of individuality, easy to replace in their stock roles. The scruff, buff Dr. Callahan (Eoin Macken) shunts the hospital playbook for the high-octane procedures he learned as a field doctor in Afghanistan. The capable, cunning Dr. Jordan Alexander (Jill Flint, Royal Pains) struggles to rein in her crew upon her appointment to night shift chief. Medically savvy suit-and-tie bureaucrat Michael Ragosa (Freddy Rodriguez, Six Feet Under, Planet Terror) butts heads with Alexander over cost-cutting measures.

On paper, it sounds like a dependable, if predictable model. But, under fire from a non-stop spew of medical emergencies, writers and producers Judah and Sachs fail to make real any of their characters or relationships. Under the intense threat of cancellation, Judah and Sachs try to do too much, ending up with nothing at all.

From a San Antonian’s perspective, The Night Shift’s cardinal sin is its played out, half-assed Alamo City representation. A scattering of details superficially root the hospital within SA: the mention of Spurs tickets, an affirming Usted Puede sign on a waiting room wall, a midshift break around a gallery of taco trucks. But it’s basic, Intro to Screenwriting stuff that feels tacked on rather than written into the show.

Of course, there are natural limitations to the setting of The Night Shift, a show taking place indoors; track shots of King William or a boozy evening on the St. Mary’s Strip could feel artificial, indulgent. But with primary filming in Albuquerque, NBC didn’t really give it a shot.

Though The Night Shift gets an alibi on its setting, there’s no excuse for its failure to render the people of San Antonio. Yes, Dr. Callahan and the Army Ranger MD Drew (Brendan Fehr, Roswell) connect the show’s message of post-military life to a base-heavy city, but the show balks at SA’s rich Tejano culture. Given the captivating power of well-paced Spanglish (see Breaking Bad or Junot Díaz’s work), The Night Shift has the opportunity to craft telling scenes of bilingual connection and clash in the hospital, an important cross-cultural space. Rather, Spanish is avoided like the plague and the sole dude who gives off the slightest of SA vibes is Dr. Callahan’s bookie, onscreen for a handful of frames.

Anyone who’s stepped foot in a waiting room at Metro Methodist or Northeast Baptist has likely heard Spanish and English traded off in untranslatable phrases. No such back-and-forth exists in NBC’s San Antonio Memorial Hospital, only the tired dialogue on the treatment of insurance-less patients within the confines of the budget. “That’s not the way the corporation thinks,” says automaton Ragosa in another laughable moment.

With such a cursory treatment of San Antonio, I don’t understand why Judah and Sachs didn’t take a Scrubs route to medical TV, placing the show in an entirely fictional space. In the Golden Age of Television, where unlikely locales like Albuquerque (Breaking Bad) and the badlands of Louisiana (True Detective) set the stage for nuanced, auteurist programs, San Antonio is stuck with television muzak, something to fall asleep to on Tuesday nights.