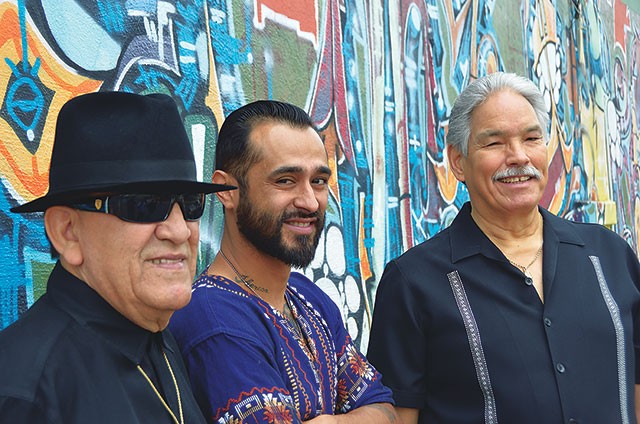 There used to be a time when the young looked up to the old. Dylan looked up to Guthrie, ’70s rockers went back to the ’60s, and classic rock stations were thriving. Now, we live in idiotic times — in order to be “relevant,” you have to be “young.”

Get me any writer who chose, say, the latest Bob Dylan or Bruce Springsteen album as one of the year’s best, and you find a writer accused of not being in touch with “what’s going on.”

San Antonio — a potential oasis for superb multi-styles, intergenerational musical collaborations — is a place where the old play for the old and the “cool” bands play for the “cool” kids. Whenever a local music legend dies, the city justifiably explodes in eloquent speeches remembering “the legend” and his contribution. But in the last months of his life, Esteban Jordan (arguably the greatest of them all) played every Friday night at an empty Saluté.

Sexto Sol is different. The Latin alternative soul/funk band was always willing to play with the older generation — and it was eager to do so. After several collaborations throughout the years, this Saturday they’ll be part of their biggest collaboration of all.

“I wanted to put together a show that was going to remind San Antonio, both music lovers and musicians alike, who the musical legends that currently live amongst us are,” said Greg Goodman, Sexto Sol’s bassist and main organizer of Saturday’s San Anto Soul Revue at Sam’s Burger Joint. The event will unite his band with two of its major influences: Sauce González (West Side Horns) and Ernie Garibay (Cats Don’t Sleep). “We’ve played with these guys before, but this one’s special — for the timing [González and Garibay are both experiencing health issues] and for the fact that they’ll both be there on the same night. Bottom line: this show means a lot to me and Sexto Sol.” As a teenager, Goodman, now 41, used to sneak into Saluté (“I had to promise [former owner Azeneth Domínguez] I wouldn’t drink”) to hear Chicano blues/soul/conjunto masters like González, Randy “Barbacoa Blues” Garibay (Ernie’s brother, who passed away in 2002), Esteban Jordan, Al Gómez, Louis Bustos and others. During the mid-’90s he would show up at Saluté’s Wednesday and Sunday jam sessions, happy to just sit and listen to the masters. To his surprise, people like legendary bassist Pete Garza (The Latin Breed) would hand him his own bass and generously ask him to sit in.

“It was absolutely the best musical education I could have gotten,” said Goodman. “I have never been able to find the same fire or huevos amongst the musical community as I did in the San Antonio R&B/soul scene during the ’90s.”

But love is a two-way street, and the old-timers appreciate the fact that Sexto Sol’s admiration is a lot more than just the respect one gives to, say, one of those buildings Noah Cross was talking about.

“For us, the most refreshing thing is that these guys understand and dig our music,” said Ernie Garibay, 67, who took over Cats Don’t Sleep after the passing of his brother, and who is ready to enter the studio for a new album. “[Sexto Sol] walks the walk when it comes time to show their admiration for the guys that have been around and paid a lot of dues for a lot of years. They’re great musicians and performers themselves, and we all feed off each other. Sexto Sol is the closest to what we’ve been doing for… well, forever, but they give it their own contemporary twist, and it’s great. Unfortunately, they don’t play together that often but when they do it’s always a special night… and they bring their crowd!”

“For us, it’s really humbling and re-energizing to play with these guys,” said González, who has recently been experiencing a series of health problems, and who will undergo heart surgery on April 1. “Last time we played together it was a full house, just like in the old times…”

“It’s such an organic combination,” said Sam Villela, Sexto Sol’s singer/keyboard player, and the leader of his own new band, simply called Villela (he had a day stage at last week’s Maverick Fest). “Yes, we have our own style, but we couldn’t do what we do if we hadn’t heard these guys.”

The San Anto Soul Revue is not only a special night for fans and the bands on the bill, but for a direct eyewitness to the impact the West Side Horns and the Garibay brothers had on the younger generation.

“I remember seeing [Goodman and Sexto Sol drummer Juan Ramos] listen very attentively to what the old masters were playing,” said Azeneth Domínguez, former owner of Saluté. “That’s why they play so well now. And to have the older musicians listen to them with the same respect must be the greatest honor. It was them who influenced Sexto Sol. That mutual admiration society is the most beautiful thing.”

Whenever you put Sexto Sol and the Chicano soul/blues masters together in a room, talking about Domínguez and Saluté is unavoidable.

“Saluté was a breeding ground for this musical expression, and Azeneth was a big factor,” said Goodman. “This show is for her too.”