Sharkey's: A place for ghost stories, cheap beer and chicharrones 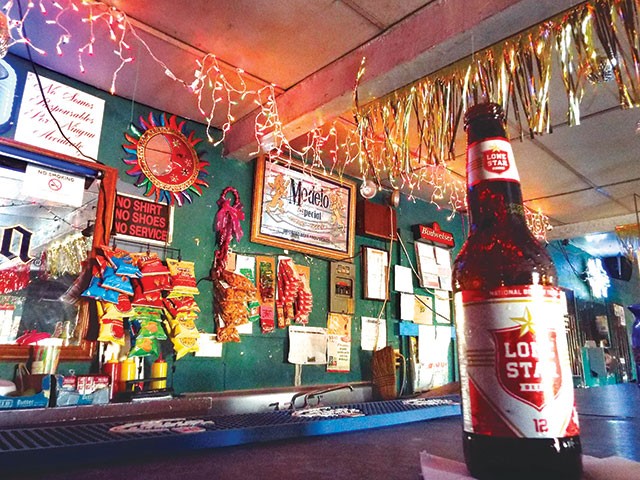 The booming crack of shotguns surrounds us and echoes across the near-empty maize field but for the half-dozen dusty hunters waiting for the piteousness of doves to circle back overhead from beyond the protective ridgeline of oaks. One silver-haired hunter greets us, raises his shotgun over our heads and takes his shot. We duck just in time as he fires, misses, curses and then smiles. The clattering of pellets rains down on a nearby rooftop. We pop the tailgate and sit to witness the one-sided warfare while he hands us a few blood- and feather-covered beers. I do my best to wipe the carnage off my can before taking a drink.

“There’s one!” he shouts at another man standing near a Dead End sign. He looks up, leads his gun and pops the bird out of the sky. The wings spread out, causing it to spiral down into the dirt. “That’s usually a headshot when they whirlybird like that.”

One of the hunters cleaning the birds calls out, “This one’s got eyes like a supermodel.”

We came for the annual after-slaughter barbecue held at Roberts’ family’s property. Since we weren’t hunting and didn’t bring any food, we offer to take his dad’s jeep out into the woods and dump the buckets of blood and bird carcasses. It is a simple task and we’ll still have time to make it Sharkey’s Bar on the West Side for my assignment. We head out in the after-dinner darkness. Except there’s a cow in the way.

“Move!” Roberts yells. The cow looks at us indignantly. “Move, damn you!” It lumbers to the side of the overgrown path, just enough for us to pass it. We bounce violently over fallen trees and big rocks.

We’re deep into nowhere when, mid-bounce, the engine and lights cut off. With no source of light to check for loose wires, we’re forced to trek all the way back in the night. There would be no reviewing Sharkey’s tonight. …

“Do you have 50 cents?” an old crone asks as we ease out of the truck.

“Let me see,” says Roberts. Neither one of us want to deny the beggar a beer or a bus ride. He finds two quarters and hands them to her. As we walk into Sharkey’s, we debate the brilliance or oddness of asking for specific change.

Sharkey’s is one of those lost, unnoticed neighborhood bars. It doesn’t look like much—and doesn’t look like much has changed in the 50 years it’s rumored to have been around in various forms and names. There is a pool table (Sharkey’s is named after the pool sharks that would frequent the bar), a television, some slot machines, clusters of Christmas lights and gold and silver streamers. We order two $2 Lonestars and a bag of chicharrones. The bartender, Gloria, answers our questions with an infectiously warm smile.

“We call her Big Momma, Santisima Muerte.” The bigger statue grasps money in her hands. “Customers leave her money and the owner uses it to buy her fresh flowers every week.”

A framed portrait of an old man rests behind a box at the shrine.

“One of our customers,” she says, noticing my curious looks. “He wanted his ashes to be at Sharkey’s.” Gloria tells us ghost stories of DJs (one plays Spanish or English club hits just about every night here) feeling a cold chill and then a hand on their shoulders, which usually leads to them running out of the bar. Another patron once threw a beer bottle at the portrait because the eyes wouldn’t stop following him.

We came, expecting nothing, and now we order more beers and ease into the old way of things. This bar is full of stories.

“He doesn’t mess with me,” Gloria continues. “I told him, ‘I’ll throw your ashes out there and leave you in the dirt!’”

Evening takes hold. I look down at the doves surrounding the shrine and I give a dollar to Death.