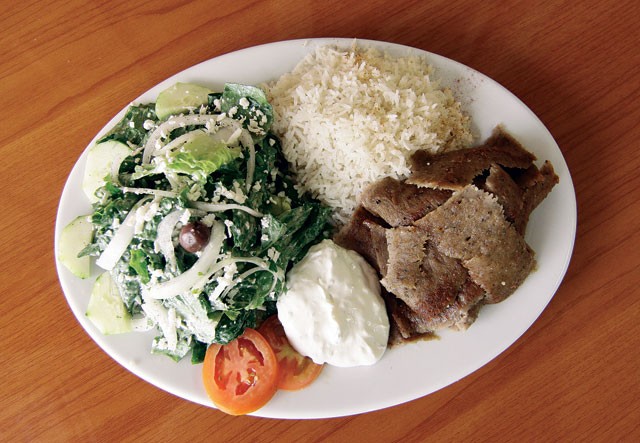 In the block of South Flores opposite the Justice Center, and just down the street from City Hall — evident of the food on offer — can be read the reasons for the low esteem in which politics and politicians in general are held by the public these days. The dark-looking Roosevelt Buffet (established 1938), Cindy's Old Fashion (meat loaf special, $6.99), and Tommy's (breaded pork chop, enchiladas verdes, $5.99) were until recently the main means of nearby sustenance. With the opening of Athens Greek Xpress, the pols and others may have to get used to paying a little more, but they will also be getting far healthier food in a shiny-bright environment with pleasant, quick service. Perhaps it will change their demeanor.

Plates run from $7.40-$9.25 and most are changes rung on a theme of chicken shawarma and gyros with Greek salad — wrapped or not. The meats are cut to order from vertical grills behind the counter, and despite a little dryness on the part of the chicken, both are well-flavored — and both benefit from being tucked into a split pita bread with some salad, and anointed with a little mild tzatziki sauce. The salad itself is fresh and handsomely dressed; yes, I would have appreciated more than one lonely black olive, but at least it was the right kind of lonely black olive. The long-grain basmati rice, decorated with a drift of cinnamon, is almost suspiciously fluffy, but nicely nutty nonetheless. I'm inspired to return for the veg platter with hummus, baba ghannouj, spanakopita and the ubiquitous salad — next time I feel like rubbing shoulders with attorneys and beleaguered bureaucrats.