The physical version of Basketball (And Other Things) checks in at 33 chapters, each tackling a hoops-themed question from the serious (“What’s the Most Important NBA Championship?”) to the not so serious (“Was Kobe Bryant a Dork?”). Serrano’s inviting humor is on full display in side-splitting chapters like “Basketball Court,” in which NBA icons Allen Iverson and Dwyane Wade argue their legacies in a daytime court TV setting, but it is the snippets of his San Antonio upbringing peppered throughout the book that ring true. 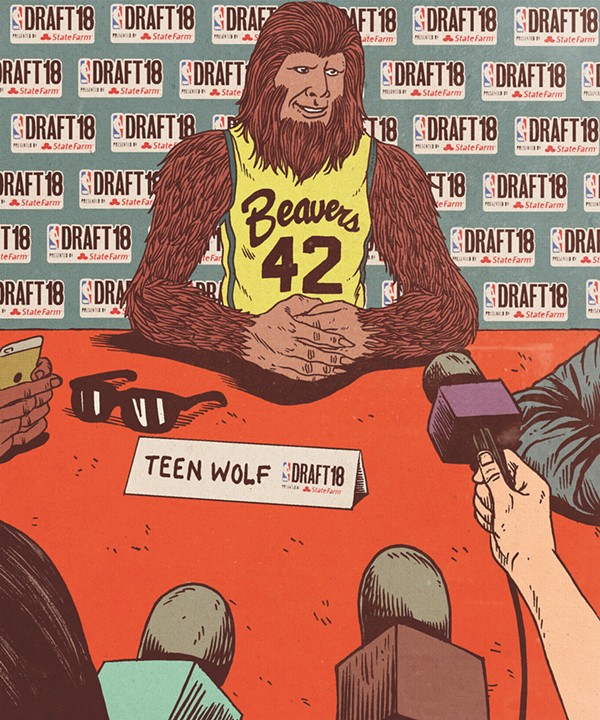 Serrano’s earnest remembrances of figures from his Southside past, including Cricket dunking on a goal at Lackland Air Force Base, Matthew with the yellow teeth, and his own Spurs-loving father, will likely connect with fans of the silver and black who grew up with the game. Amazing artwork by Torres adds Jack Kirby-esque crackle to the book, whether depicting Chauncey Billups singing “Dreaming of You” at Selena Karaoke night or capturing Scottie Pippen walking away from an explosion in mid action-hero pose.

For initiated heads, Serrano’s New York Times best-selling The Rap Year Book conjures up memories of Ego Trip’s oft-forgotten Book of Rap Lists. Similarly, Basketball (And Other Things) feels like a spiritual descendant to Free Darko’s Macrophenomenal Pro Basketball Almanac and its follow-up The Undisputed Guide to Pro Basketball History. This time around, the game changer is clearly Torres, who has confidently come into his own as a dynamic illustrator.

“To a lot of people these aren’t just athletes,” Torres told the Current last year, describing the vision for his work. “They’re superheroes in these kid’s eyes. So I want to have the same feel and the same look.”

Serrano will return to San Antonio in support of Basketball (And Other Things) later this month. Details for what is sure to be a spirited book signing are forthcoming.