Shenanygans II Brings Its Tomfoolery to the West Side 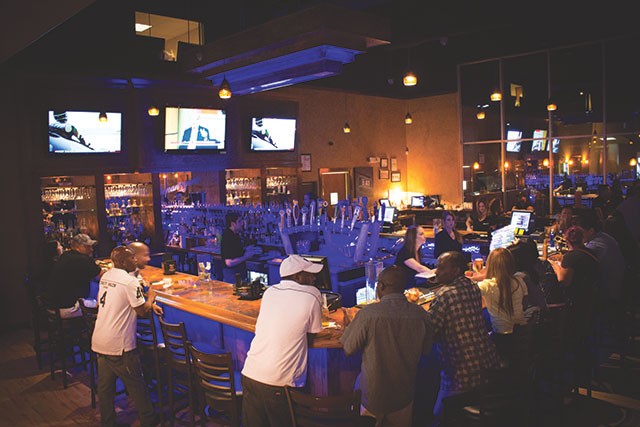 Love Shenanygans (no relation to the restaurant from Super Troopers) on Babcock but live on the far West Side? Well, you’re in luck: Shenanygans II is here to whet those Westside whistles. The same varied food and drink menu and pleasant atmosphere that made Shenanygans (Shenanygans I now?) a popular after-work spot is intact at the new digs just off Potranco and 151.

Shenanygans II is equally as varied, if a little pricey, on the drink front. The brew lineup is impressive with 28 bottles, five cans and 20 taps (including the delicious Leinenkugel Summer Shandy). Cocktails (including the skinny variety), wines (35-plus) and signature shots (in the mood for a Starbaby?) round out their offerings.

Both food and drink can be enjoyed in a main seating area that contains various tables, booths and bar tops, outside on the large patio or off to the side in their pool room (three tables, two dart boards and a trio of TVs).

Once you’re in, there’s tons to do. But this is assuming you can get in. While the crowd trends toward 20-somethings and schoolteacher happy hour types, some folk evidently don’t meet the criteria for entry into this bar literally named after mischievous tomfoolery.

And it’s hard NOT to notice the criteria as it is plastered all around the entrance. Said rules include the following:

No sleeveless shirts, such as the ever popular “wife beater” (a term we should really get away from using but I’m repeating here since it is on the sign). And if you try to class it up with an “unbuttoned shirt over the wife beater,” well, you can’t do that either. Also no baggy pants, no neck tattoos (that is just good life advice), no “gym wear” and no backwards hats.

But don’t fret, Sons of Anarchy fans; wallet chains ARE allowed (thank God), provided they are tucked in. Now, with all that being said, there is yet another small sign that claims the “dress code is to manager’s discretion.” So, if he or she doesn’t like the cut of your jib that particular night, well, you’re out of luck.

Shenanygans II succeeds in hitting that fun, personality-infused vibe without coming off as overly produced. Remember that next time you’re trying to find a place with goofy shit on the walls and cheese sticks.