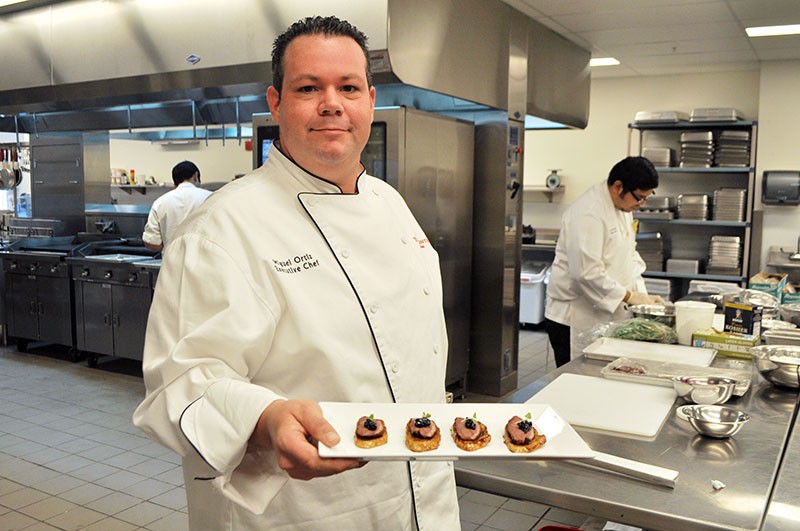 I'm not sure I could retrace my steps were I asked to find the Tobin's gleaming 2,000-square-foot kitchen. The roomy $3 million prep wonderland has allowed executive chef Miguel Ortiz to bring new flavors into SA that are already making a splash.

In 2007, he made his way to New York's Marriott Marquis where he spent close to three years as sous chef in fine dining, banquets and upscale a la carte menus in NYC's Theatre District.

As executive chef at the Tobin Performing Arts Center, Ortiz is bringing his 14-plus years of banquet experience, along with his flair for Asian flavors and Latin American cuisine with a focus on Puerto Rican and Cuban food (a teensy crab gordita hors d'oeuvre is turning into a favorite).

He's bringing with him Alan Hernandez, 23, who's worked with him for four years, to help serve innovative dishes to evolving SA palates in each of the Tobin's six available rental spaces.

Ortiz has already led the team to a first place finish during the second annual Alamo National Association for Catering and Events Tasty Bites Challenge.

"I wanted to do something super sexy that people haven't tasted before," Ortiz said.

This included a cardamom French toast topped with smoked duck and a Chambord-berry compote, along with mini ice cream cones filled with raspberry brie cheese topped with a Greek-style baby walnut.

Poached in a mix of sugar water and spices, the walnut was completely edible.

"We knew that was something people hadn't tasted down south."

Ortiz and his tiny team of five are tackling parties ranging from 400 to 1,000, but he's also tasked with completing rider requests from visiting bands — such as turning the Tobin 100 percent vegan/vegetarian during Paul McCartney's visit.

"We wanted to show flavorful vegetarian items — a tofu parmesan sandwich, curry tempeh, curry tofu — that's not run of the mill ... everyone has a portabella sandwich," said Ortiz, who's cooked for the likes of Tom Cruise, Katie Holmes, Mike Tyson and the MTV Video Music Awards during his time in NYC.

Tobin-goers not named Sir Paul can enjoy pre-show dining prior to the center's marquee performances inside its rotunda-based eatery, Taste.

Reservations for dinners (select dates are listed on the Tobin's website) are strongly encouraged for pre-show dining, which often includes visits by performers — Bumble the Abominable Snow Monster made a cameo before performances of the Rudolph The Red-Nosed Reindeer: The Musical in December.

Dinner and a show, anyone?